Diminishing marginal utility states that as all else equal as consumption increases the marginal utility derived from each additional unit declines.  In other words, the more you have something, the less value it brings.  An example of this is a child with his bag of candy after Halloween.  He opens it up, eats his favorite candy, and feels good.  But if he was forced to eat the rest of his candy, there would be a point in the process where the value of eating the candy would turn negative, and he would not enjoy another bite.

Diminishing marginal utility goes hand-in-hand with supply and demand and impacts every aspect of life, whether we realize it or not, and impacts nearly every decision we make.  Eating out at a nice restaurant is enjoyable.  Eating out at the same nice restaurant every night would become a laborious event.  Like us citizens, the US government’s discretional spending is also under the spell of diminishing marginal utility.  Let me explain. 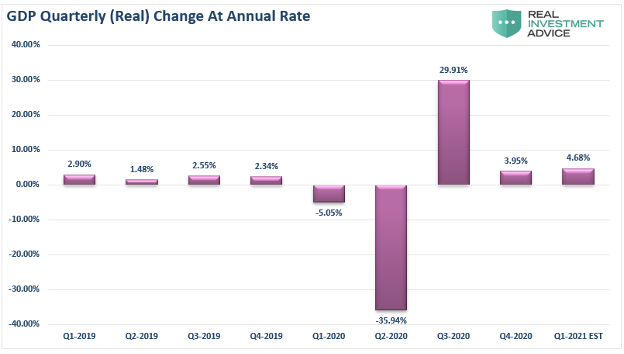 The table above shows the quarterly change in GDP at an annual rate.  Q4 2019’s reading of 2.34% means that if the GDP remained consistent for four straight quarters, the yearly GDP would have grown 2.34%.  Pre-Covid, a reading between 2% and 3% was typical.  Covid’s impact on the United States GDP readings began late Q1 but truly imploded consumer spending through Q2, after overwhelming lockdowns, layoffs, and an overall sense of fear.

The Federal Reserve and the US Treasury threw the kitchen sink at the problem and, voila, the combination of unprecedented fiscal and monetary stimulus generated a GDP rebound of nearly 30% in Q3.  Many believe this is confirmation that fiscal and monetary stimulus can solve any problem the economy encounters, and is a main reason individuals and institutions alike are hitting euphoric levels of bullishness over the US stock market, despite what many call the worst economy since the Great Depression.  Is fiscal stimulus the answer? Let’s take a closer look. 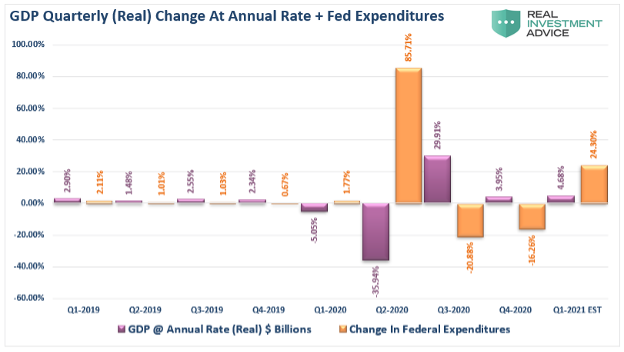 The above image paints a different picture of what will happen with more fiscal stimulus.  In orange, we see government expenditures in the same format, quarterly change at an annual rate.  Government spending has historically amounted to about 35% of GDP per year (Source: Statista.com).  The Q2 Fed Expenditure to GDP ratio of nearly three-to-one speaks volumes.  The following two quarters Federal expenditures declined from Q2 levels, but remained significantly elevated from pre-Covid standards, followed by another rise in Q1 2021.  The pattern is such that more spending does not equal an accurate ratio of more GDP.  The concern here is the diminishing marginal utility of fiscal stimulus would mean this ratio would only get worse, as more fiscal stimulus would be needed to achieve the same GDP output.  In other words, if stimulus packages do not balloon but rather remain relatively even to previous measurements taken (such as the $1.9 billion proposed plan compared to the CARES Act), the economy may stall out entirely.  This creates a perpetual loop of a market that desires constant, consistent, immense government intervention within the economy, which with each action drives us further from a free market economy.

This is a teachable moment as diminishing marginal utility is present in your everyday life.  As an advisor, more clients do not necessarily mean more revenue, but always means more work.  As an established advisor, it may be best to concentrate on providing the upmost advisor services to the clients you already have, and to be selective with the new clients you take on.  Your future self will thank you for this!