President Biden’s stimulus bill “will cut the number of children in poverty by 40%,” according to the Center on Budget and Policy Priorities.

The NY Times also jumped on Biden’s stimulus package to tout how “transformative” Biden will be to the U.S. economy. To wit:

“The list of new policies goes on. There is money in the American Rescue Plan to expand food stamps, bolster state welfare programs, and increase federal support for child and dependent care. Put all this together and the bill is expected to reduce overall poverty by more than a third and child poverty by more than half. It is, with no exaggeration, the single most important piece of anti-poverty legislation since Lyndon B. Johnson’s Great Society, itself the signature program of a man who sought to emulate F.D.R.”

Here’s the problem. Unlike the New Deal, which benefitted the economy for decades, the American Rescue Plan will only help the poor for one year. As is always the case with such socialistic policies, they sound great in theory, but they rarely work as expected in reality.

The Poor Do Need Help

I certainly agree with trying to help those in need. Such is why we have charitable organizations that do everything from providing housing, meals, and even job placement. These charities do formidable, challenging, and meaningful work and should have access to funding to do what they do best.

However, the Federal Government is not one of these charities, and throwing money at the problem does more harm than good in the long-term.

Using data from the Census Bureau, we can look at the bottom 20% of the population’s historical incomes since 1967. As shown, there has virtually been no substantive increase in median incomes for that income group since 1980. 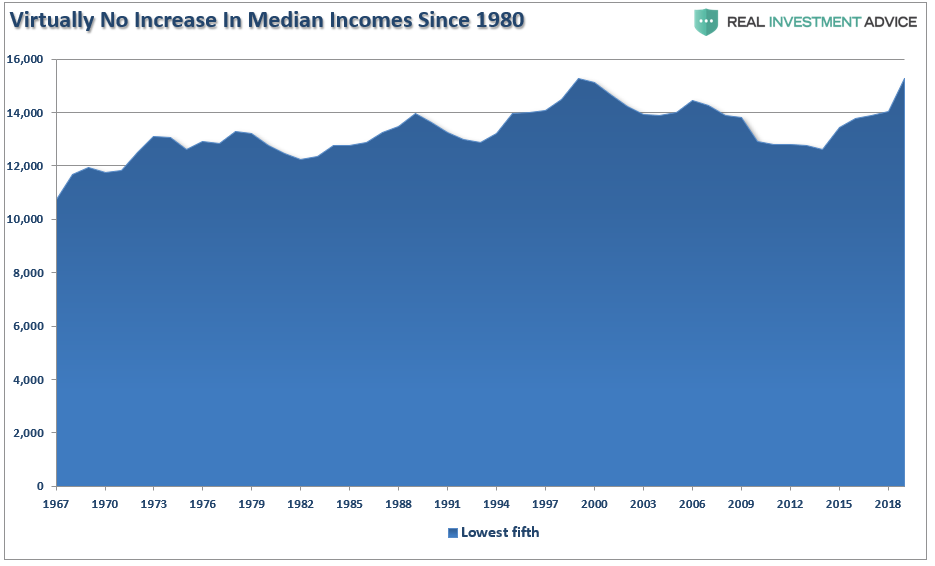 The problem is more apparent when viewed against the other income quintiles. 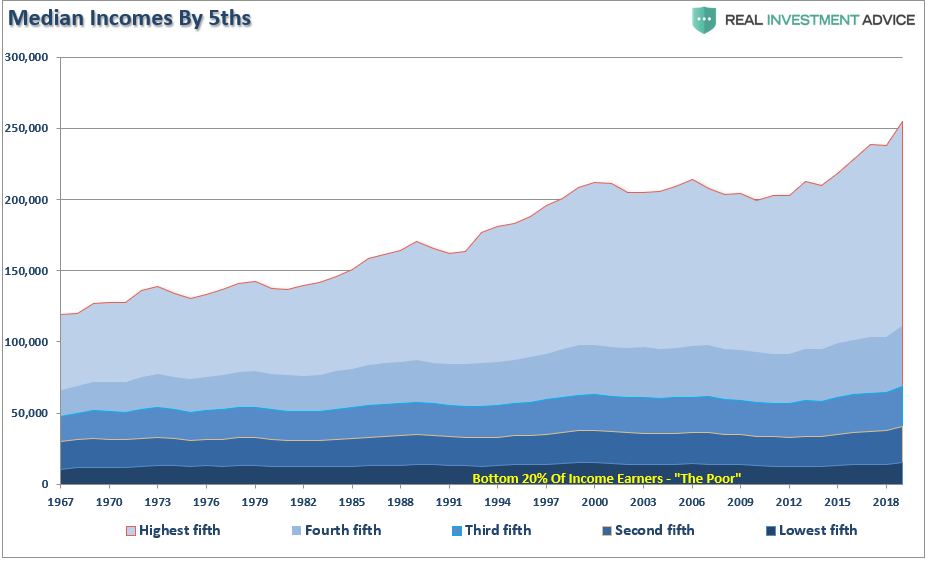 The problem of “government handouts” should be readily apparent. Since the 1960’s the U.S. has expanded access to social security, welfare, food stamps, tax credits, and a litany of other programs directly targeted to help the most deficient 20% of Americans.

Nothing has changed. Even if the current one-year subsidies are made permanent, they will fail to change the economics of poverty after one-year.

Given the massive support given to the poor over the last 60-years, it should be readily apparent that something is flawed in the thinking. To explain the issue, let’s use another “socialistic policy” being floated by more liberal thinkers – a “universal basic income” or “UBI.”

The idea is that if the Government supplies a basic “living income” to the poor, they will be better off as they won’t have to worry about meeting their “basic needs.” While noble in its intent, economically, it doesn’t change outcomes over the longer term.

The chart below shows the economy’s annual GDP growth trend assuming the entire UBI program shows up in economic growth. For those supporting programs like UBI, it certainly appears as if GDP elevates permanently to a higher level. 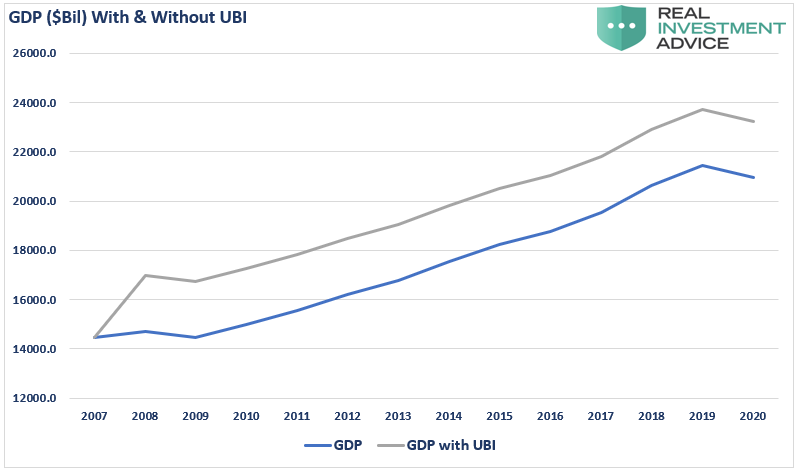 When you look at the annual rate of change in economic growth, which is how we measure GDP for economic purposes, a different picture emerges. In 2008, when the $12,000 arrives at households, GDP spikes, printing a 17% growth rate versus the actual 1.81% rate. 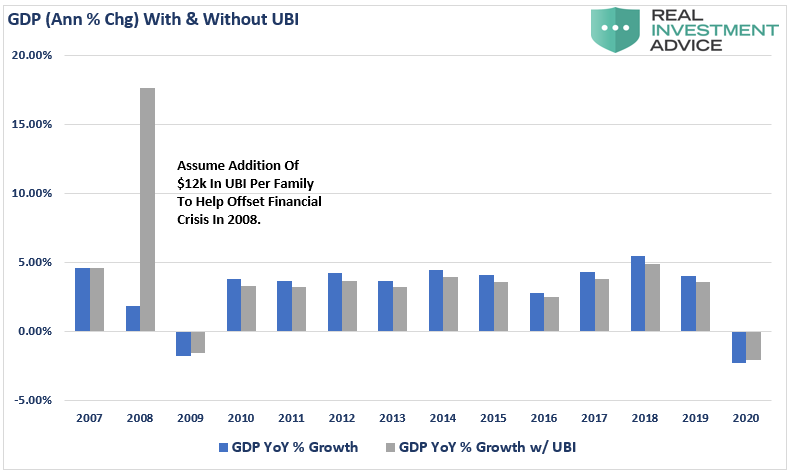 However, beginning in 2009, the benefit disappears. The reason is that after UBI enters the system, the economy normalizes to a “new level” after the first year. Also, notice that GDP grows at a slightly slower rate as dollar changes to GDP at higher levels print a lower growth rate.

Of course, the money to provide the $12,000 UBI benefit had to come from somewhere.

According to the Center On Budget & Policy Priorities, in 2020, roughly 75% of every tax dollar went to non-productive spending.

“In the fiscal year 2019, the Federal Government spent $4.4 trillion, amounting to 21 percent of the nation’s gross domestic product (GDP). Of that $4.4 trillion, federal revenues financed only $3.5 trillion. The remaining $984 billion came from debt issuance. As the chart below shows, three major areas of spending make up most of the budget.”

Think about that for a minute. In 2019, 75% of all expenditures went to social welfare and interest on the debt. Those payments required $3.3 Trillion of the $3.5 Trillion (or 95%) of the total revenue collected.

Given the decline in economic activity during 2020, those numbers become markedly worse. For the first time in U.S. history, the Federal Government will have to issue debt to cover the mandatory spending. If we add a UBI payment, the deficit spending becomes markedly worse. 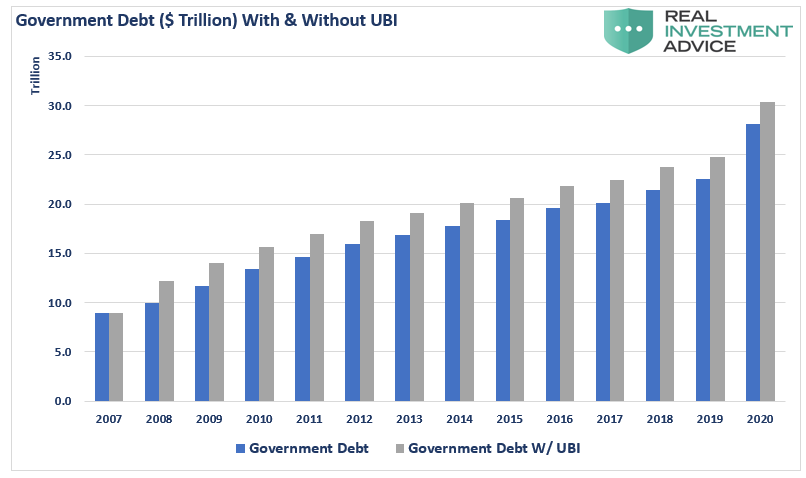 The chart below shows the impact of the additional debt on the Federal deficit. 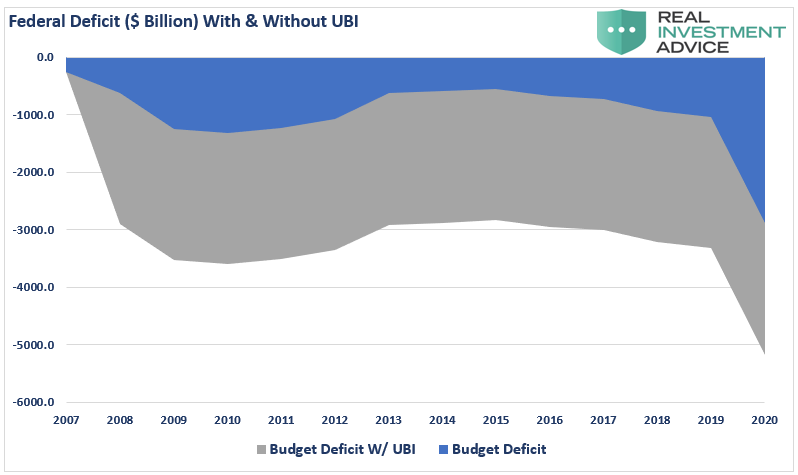 While the “theoretical models” assume that UBI will create enough economic growth and prosperity to “offset” the increase in debt, 40-years of history suggest otherwise.

The Poor Will Remain Poor

Social programs don’t increase prosperity over time. Yes, sending checks to households will increase economic prosperity and cut poverty for 12-months. However, next year, when the checks end, the poverty levels will return to normal, and worse, due to increased inflation.

In a rush to help those in need, economic basics are nearly always forgotten. If I increase incomes by $1000/month, prices of goods and services will adjust to the increased demand. As noted above, the economy will quickly absorb the increased incomes returning the poor to the previous position.

“‘The ability to ‘maintain a certain standard of living’ remains problematic for many forcing them further into debt.’ – WSJ”

I often show the “gap” between the “standard of living” and real disposable incomes. In 1990, incomes alone were no longer able to meet the standard of living. Therefore, consumers turned to debt to fill the “gap.” 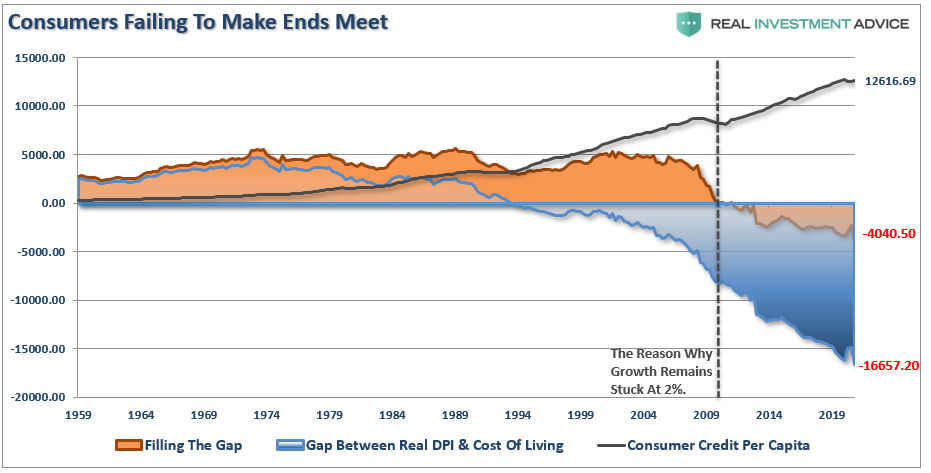 However, following the “financial crisis,” even the combined income and debt levels no longer filled the gap. Currently, there is almost a $4050 annual deficit facing the average American.

The problem with an economy built on “debt” is exceptionally problematic for the poor as they generally can’t obtain credit. Such cuts off a much-needed source of spending power in the economy.

“‘Consumers increasingly need it [debt].Companies increasingly can’t sell their goods without it. And the economy, which counts on consumer spending for more than two-thirds of GDP, would struggle without a plentiful supply of credit.’ – WSJ”

In the end, once the stimulus fades and the economy adjusts for inflation, Biden’s small moment of reduced poverty rates will revert with a vengeance.

Not A “New New Deal”

While the media is quick to fawn on Biden’s stimulus plan, claiming it to be the 2nd coming of FDR, it isn’t.

FDR’s “New Deal” did have many “social programs” embedded in it, including the beginning of the social welfare safety net. However, FDR backed those social programs with massive works projects from the Hoover Dam’s building to the Tennesse River Valley Authority. Not only did the spending on these projects create jobs, but they were also productive investments repaying the debt used to fund them.

More importantly, the focus of many of the programs was the creation of “jobs.” From the Works Progress Administration to the National Labor Relations Act, Roosevelt believed the best solution to help those in need was to get them back to work.

Furthermore, FDR focused on cleaning up the predatory nature of the financial system on Americans. The 1933 Banking Act, which reformed the banking system by separating banking and brokerage activities. He also established regulatory oversight on the banking system with the Securities Act of 1933.

While providing short-term relief, Biden’s plan does nothing to solve the long-term problems of those living at poverty levels. They need both incentives to “go to work” and access to training and education to obtain gainful employment.

Such is what FDR understood. As with all Government programs, some programs worked while others didn’t. Today, there is still debate about whether FDR’s programs cured or exacerbated the “Great Depression.”

However, what history does define well is that debt-funded programs to provide social assistance to the poor have failed.

Next year, when the money is all spent, we will find poverty levels surged, economic growth weakened, and deficits exploded.

Such is the outcome of all socialistic programs in history.

Related: Why The Economy Will Run Hot, Then Crash