A Playbook for Late Cycle Investing

In the past 45 years, only twice has the ICE BAML (Bank of America Merrill Lynch) Investment Grade index experienced a quarter worse than that of Q1 (first quarter) 2022. Investment grade debt has periodically experienced negative quarterly returns since the inception of the index, but negative returns of the magnitude witnessed during the quarter are considerably rare. In isolation, it is clear that there are some specific geopolitical, economic and technical factors which have driven this level of volatility. However, if we take a moment and shift our focus by introducing some historic context to some of these events, what we discover is enough evidence to consider opening our investing playbook to the chapter on late-cycle investing.

In his most recent post, Regime Change: Inflation and the End of the Great Bond Bull Market, Cliff Corso outlines clearly the reasons that a secular change is afoot among both equity and fixed income markets. While we do not suggest that a recession is imminent, we feel it is not too early to consider how to tactically shift and managed fixed income assets through the latter stages of an expansion given the potential for an economic slowdown.

History tends to show that when the Federal Open Market Committee (FOMC) begins a rate hiking cycle usually a recession occurs. It is true that there are examples (1966, 1995) where the economy avoided a recession but to be clear, these periods also coincided with a period of slower economic growth. Given this context, the recent economic events of the past 18 months are worth briefly reviewing as we can easily highlight the important characteristics of a late-cycle economy:

In our opinion, the checklist of items listed above are clear signposts to estimating the location of the broad economy within the business cycle. Some of those items (flat yield curve, inflation) in this checklist became manifest in 2021 while others (corporate spreads, equity volatility, policy pivot) became apparent just this year.

Below is a chart of corporate credit spreads from 1996 to present. Credit spreads provide important context into the risk appetite and associated economic outlook for fixed income investors. During periods when the FOMC maintains their accommodative policy stance, fixed income investors become more confident in the ability of issuers to service their debt. The attractiveness of yields for credit-risky issuers combined with the broadly optimistic outlook compresses yields and as a result reduces the compensation (i.e., spread) being paid to the investor for holding bonds with higher credit risk. As the chart for the ICE BAML Broad HY Index illustrates, the attractiveness of credit risk during these periods has often pushed spread levels in the sector lower than 500bps (basis points) and, during some periods, lower than 300bps.

As can be seen in the chart below, for various reasons, spread widening and tightening occurs throughout the breadth of an economic expansion. As seen in 2004, 2014, 2015, and 2018 it is not uncommon to witness ongoing economic expansion punctuated with periodic flights to quality. However, what is notable for our purposes at present is that our current spread widening has occurred during a period when the FOMC has firmly, and perhaps finally, pivoted to a restrictive monetary policy stance. While 500bps may appear to be an arbitrary level for spreads, it does provide an important and convenient way to gauge the credit appetite of the fixed income markets and the outlook the markets may be discounting. 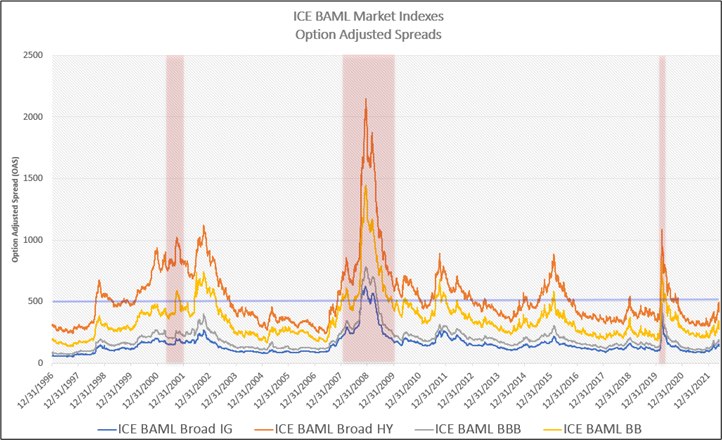 Source: ICE BAML Market Indices | Past performance is not indicative of future results.

Our capital market expectations, supported in part by some of the economic signals mentioned, provide the framework from which credit and duration exposures are developed and implemented. These capital market expectations serve as the foundation for our investing playbook. As a result, and given the context the checklist of indicators can provide, the playbook for late-expansion fixed income investing includes some deliberate and tactical exposure changes:

It is possible that in their attempt to temper inflation, the FOMC will engineer a soft-landing instead of causing a recession. However, our investing thesis at this time remains consistent regardless of the outcome of their efforts. We continue to feel that proactively managing portfolios, discovering value through appropriate credit exposure while maintaining careful duration distribution will help prepare fixed income portfolios for better outcomes.