This Billionaire Is Now Using One of Our Top Strategies

Has billionaire Dan Loeb been reading the RiskHedge Report?

Loeb climbed to the top of Wall Street by achieving remarkable success as an “activist investor.”

In a nutshell, Loeb would buy large stakes in struggling companies… replace management… and make other adjustments (like cutting a dividend) to turn around the company.

Most people with that much success wouldn’t change their approach. If it isn’t broke, why fix it, right?

But Loeb recently made a huge change in how he invests…

Hypergrowth companies are exactly what they sound like. They’re companies that grow at an explosive rate.

As longtime readers know, not only do these companies turn entire industries on their heads…

In some cases, they create brand-new industries from scratch.

According to CNBC, Loeb wrote in his recent investor letter:

“[We have] moved decisively into building our capability to invest in ‘hyper-growth’ companies, focusing on early-stage ventures.”

Loeb largely avoided hypergrowth stocks for most of his career. Instead, he focused on “dirt cheap” value stocks with the potential to rebound.

So, why the change?

For example, Loeb’s hedge fund Third Point invested in cybersecurity disruptor SentinelOne (S) in 2015. At the time, SentinelOne was a private company valued at just $98 million.

Today, SentinelOne is a publicly traded company worth $15.6 billion. In other words, SentinelOne’s market value has increased more than 150X since Loeb first invested in it!

But, like SentinelOne, Upstart went public earlier this year. It’s now worth $16.7 billion… or 112X more than the company was worth when Loeb originally invested in it!

FTX is one of the world’s biggest cryptocurrency exchanges, and one of the fastest-growing businesses on the planet.

The company was founded just three years ago. And it’s already worth $18 billion.

This is a huge departure from how Loeb used to invest…

Loeb said so himself in his recent letter to Third Point investors. Per CNBC:

While valuation always matters, our analysis is more focused today on business quality, differentiation, innovation, disruption and market structure… This contrasts with our previous focus as an event-driven fund on using “events” (spinoffs, recaps, mergers, etc.) as opportunities to find “cheap” stocks.

In other words, Loeb is investing more heavily into innovative companies… even though it’s not cheap to invest in them.

In fact, investors will often pay steep premiums to own hypergrowth stocks. And that keeps many old-school investors from touching them.

But that hesitation often leads to missing out on multi-bagger investments.

Of course, you don’t need to be a private investor or billionaire like Loeb to make a fortune off hypergrowth stocks.

Most folks do the opposite. They buy whatever’s cheap.

By “cheap,” I mean stocks that have a low stock price in relation to their sales or earnings.

People are drawn to “cheap” stocks for the same reason they flock to the Macy’s clearance rack. It feels good to get a deal. Americans love nothing more than getting lots of “bang for their buck.”

But when it comes to investing, this is usually the wrong approach.

When I recommended Cloudflare to IPO Insiders in November 2019, it was flying under the radar. Most people hadn’t heard of edge computing yet.

According to traditional valuation metrics, Cloudflare was expensive. But that didn’t stop it from becoming a monster stock.

As you can see below, NET has rallied 558% since I recommended it less than two years ago. 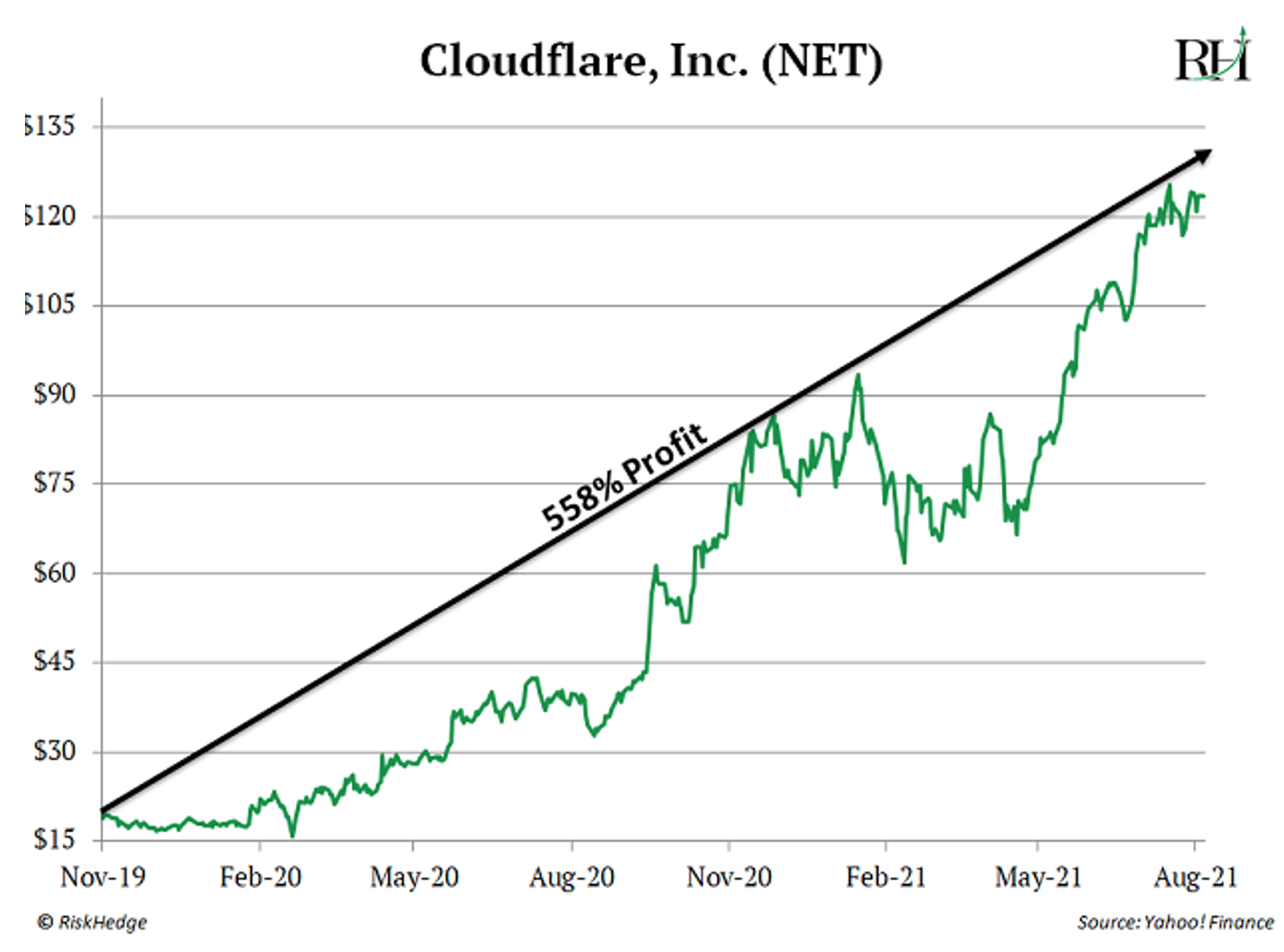 According to analyst Jamin Ball, Cloudflare is the fourth most expensive software stock—behind SentinelOne, Bill.com, and Snowflake.

Yet I have no intention of selling it anytime soon—it still has plenty of room to grow.

Bill.com (BILL) is another hypergrowth stock that I recently recommended. As you can see, it’s even more expensive than Cloudflare.

Bill.com is a software as a service (SaaS) company. In short, the company sells cloud-based software that helps simplify, digitize, and automate back-office financial processes. 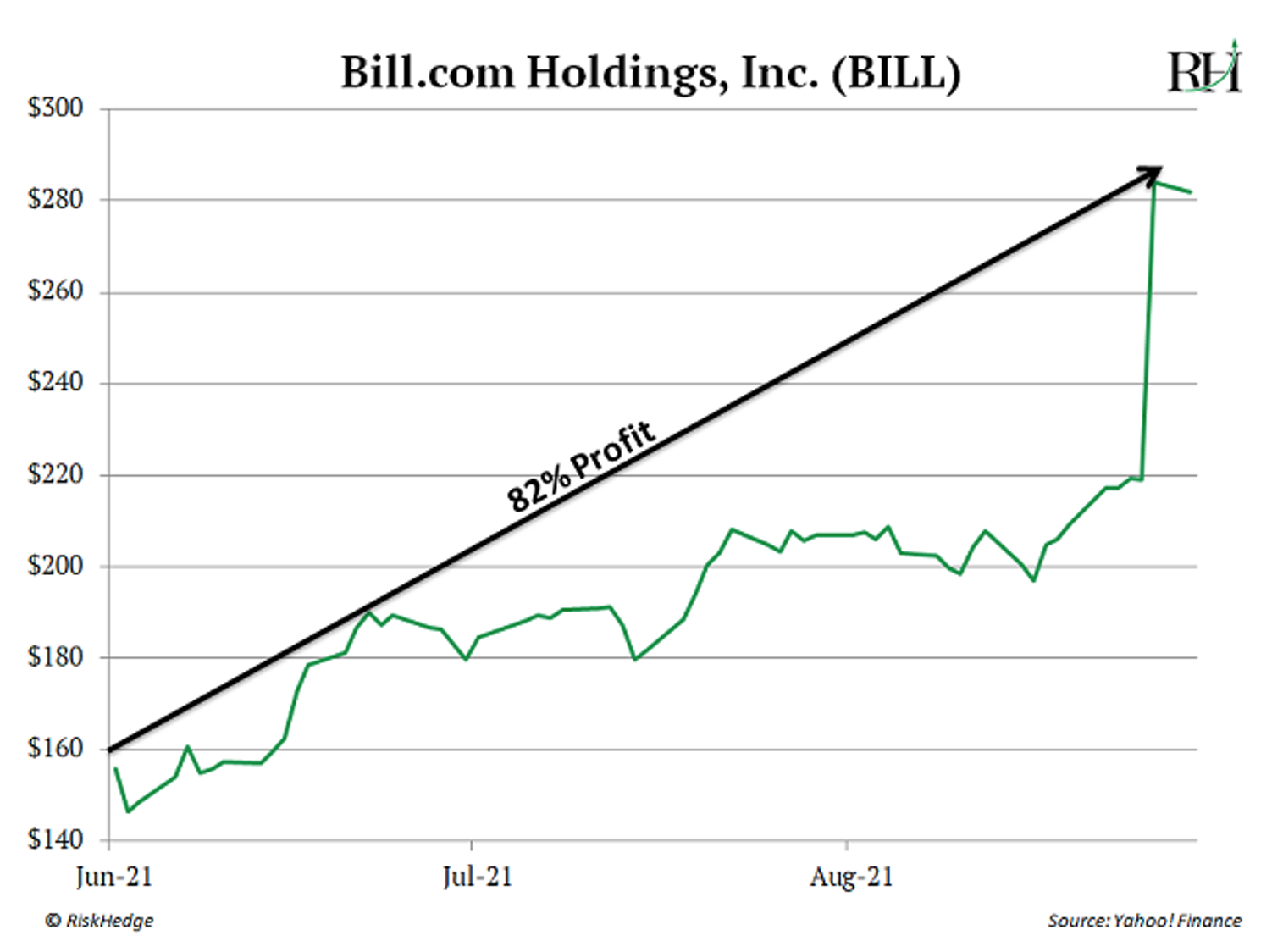 And those are just two examples.

Other expensive software stocks include Zscaler (ZS), Asana (ASAN), and Atlassian (TEAM). If you had avoided these stocks due to their lofty valuations, you would have missed out on big gains.

Investing in these types of opportunities can lead to explosive profits… in some cases, triple-digit gains in a matter of months.