The Most Important Chart in Housing Right Now

American homeowners just got a lot richer. According to internet realtor Zillow (ZG), US housing gained $2.5 trillion in value last year. That’s the biggest jump since 2005.

This is one of the greatest comebacks in American history. Between 2006 and 2009, the average home lost over a quarter of its value. More than eight million Americans lost their homes during the collapse.

This shocked millions of folks who believed the lie that US real estate was a slam-dunk, can’t-lose investment. It also shattered a whole generation of Americans who were starting to “grow up.” I’m talking about millennials—the largest generation in US history, bigger even than the baby boomers.

Around 2009, millennials were due to begin their careers, buy their first homes, and start their families. But these kids graduated college and entered a job market that was decimated by the 2008 crisis.

Even millionaires couldn’t get mortgages after the housing bust. A 20-something-year-old with a couple grand in the bank? No chance! By 2018, millennial homeownership had sunk to a record low. This tricked folks into believing this generation was doomed to be eternally broke. They thought these kids would live in their parents’ basements forever.

Here’s The Most Important Chart In All Of Housing

It breaks down home ownership by age. You can see the number of young folks who owned a home peaked in 2005, then collapsed to record lows over the next decade. But the indicator started to tick up in 2019 when a wave of young homebuyers burst into the market. 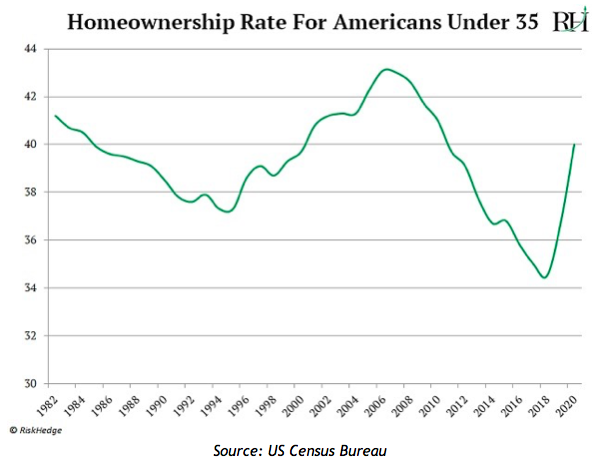 After being famously absent for a decade, millennials now make up the largest share of home buyers, according to the National Association of Realtors. In fact, on its latest earnings call, America’s largest homebuilder, DR Horton, quipped: “over 40% of our buyers are under 34.”

Think about it like this: the ‘08 crisis forced millennials to put adulthood on the back burner. It disrupted the natural ebb and flow of the “next generation” starting life. Now millennials are hitting prime home-buying age, and they’re piling into the market in record numbers.

Bloomberg recently ran an article about millennials skipping the starter home and buying mansions instead. Luxury realtor Sotheby’s told reporters: “Millennials are finally coming out of the gate. It’s not uncommon for their first purchase to be a multimillion-dollar luxury home.”

And here’s what’s really interesting: Only the first wave of young homebuyers has burst into the market so far. Pew Research data shows the average age of a first-time home buyer is 31. Last year, the average millennial turned 31. Which means we’re just kicking off this massive trend.

This housing boom has YEARS left to run. You likely remember the ‘08 crisis turned off a lot of ordinary Americans from investing in housing. It shattered the confidence of homebuilders, too. Builders have been sitting on their hands for the past 12 years. And it’s created a serious housing shortage in America today.

There’s currently only one million homes for sale across the entire US, according to the National Association of Realtors (NAR). That’s the lowest number since NAR started tracking data in 1982. In other words, there are fewer homes for sale in America today than at any time since Ronald Reagan’s first term as president, at a time when a whole generation of homebuyers will soon flood the market!

It would take less than two months to sell every existing home on the market. In December, the average property was snapped up in just 21 days, an all-time record.

This won’t come as a surprise to longtime RiskHedge readers. As housing expert Barry Habib told me last year, “The most important driver of home prices is supply and demand.” Today, supply is tighter than it’s ever been. And with record numbers of house hunters entering the market, it all but guarantees the housing boom has years left to run.

The cure for America's housing woes is simple: Homebuilders MUST build more houses. As I mentioned, builders have been very cautious over the past decade. But now they’re finally ramping up. The number of new home “starts” shot up to their highest level since 2006 last month. And confidence among homebuilders hit all-time highs for the second month running.

Even after this bump, housing “starts” are still lower than they were in 1959! Yet, the number of Americans has doubled over the past 60 years. In short, homebuilders have to build tens of millions of new homes over the coming decade.

This will make them look like fast-growing tech startups. For example, DR Horton sold $6.4 billion worth of homes last quarter, a 62% jump compared to 2019. The Homebuilders ETF (ITB) has almost doubled since I first wrote about this opportunity in early 2019: 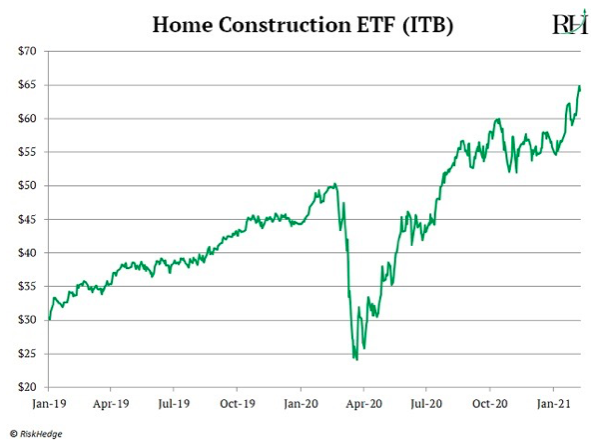 I expect that homeownership rates for young folks will surge to new heights over the coming decade. This will continue fueling the largest housing boom ever. If you’re not invested in this trend yet, now’s the time to put your money to work.