A message board destroys a top Wall Street hedge fund. You’ve surely heard about the WallStreetBets/GameStop saga by now. Many investors see it as a sign markets are headed for a crash.

In fact, Google searches for “stock market bubble” just hit the highest level ever. And a new E-Trade survey found two-thirds of investors think the market is in a bubble.

What if I told you this is the start of a megatrend that will propel disruptor stocks higher for years? As I’ll show you today, this story runs much deeper than a bunch of average Joes crushing the pros.

I think it’s jet fuel that will propel the stock market higher for a long time. And it all has to do with today’s generation of young adults, aka “millennials.”

We’ve poked fun at these kids for years. You’ve likely heard that millennials don’t own any assets. They weren’t participating in the markets: they were just living in their parents’ basements.

And millennials might just be the poorest generation of the past century. A Federal Reserve study showed they own just 5% of all wealth in America. That’s well below the 26% share baby boomers amassed at a similar age. Just look at that tiny gray sliver: 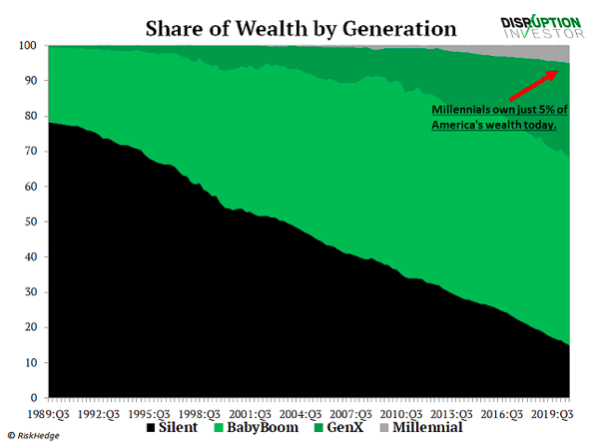 A 2019 Gallup poll found only one-third of millennials invest in the stock market. But that’s all changing.

The “Kids” Are Finally Taking Over

Young investors piled into stocks like never before in 2020. Online broker Charles Schwab gained a record 4 million new clients last year. More than half of these new investors are under 40.

In fact, Americans opened 10 million new brokerage accounts in 2020. And more than half of them came from millennial favorite Robinhood.  As you may know, Robinhood is a disruptor in the world of finance. It pioneered zero-fee trading. And its smartphone app allows you to buy and sell stocks at the swipe of a button.

The disruptor now has over 15 million clients, and their median age is 31. Guess what age the average millennial will turn this year? 32.

Remember, the “knock” on this generation was they don’t own any assets. They’re finally entering the market, and now folks are complaining that inexperienced kids are fueling a bubble.

They see millennials making risky bets and think: “Is it really a good thing that newbie investors are bidding stocks up to crazy prices? Isn't that the opposite of what investing should be?”

What happened with GameStop was a big deal. It shows these young investors can move markets. But this runs much deeper than newbies getting rich off a short squeeze. The real story is the largest generation in American history is pouring into the stock market for the first time ever.

This Will Fuel A Major Boom In Disruptor Stocks

Sure, some millennials will speculate on stodgy ol’ dinosaur stocks to make a quick buck, but they’re disruption investors at heart. Apex Clearing analyzed 1.8 million trading accounts of US investors who were 32 years old. Their top holdings?

In short, young folks LOVE investing in companies changing the world. The idea that millennials are bad investors is also just plain wrong. Their top four holdings surged 570%, 69%, 66%, and 1,405% over the past year.

In fact, they’ve nailed many of 2020’s big trades. Many millennials piled into airline stocks last May after Warren Buffett’s Berkshire Hathaway sold all of its shares in the four largest US airlines. Delta, American Airlines, Southwest, and United Airlines are all up around 100% since then. Others made a killing on “stay-at-home” stocks like Zoom and Peloton during the summer.

A study from the National Bureau of Economic Research found “investors on Robinhood did not panic during the market [March 2020] meltdown and acted as a market-stabilizing force.”

I’ve been a casual observer on Reddit’s WallStreetBets message board for the past year. This website was at the center of the GameStop saga. It’s also a favorite among young investors. Based on screenshots uploaded by members, many of their brokerage accounts have surged 5X to 10X over the past year. They often talk about using the gains to put down payments on houses and to pay off student loans.

Young Investors Haven’t Been This Interested In The Stock Market Since The ‘90s.

You likely remember this fueled the dot-com boom, which ended in an epic crash. Folks see all these newbies piling in and think “uh oh, not again.” But my research suggests we’re still in the early innings of a historic boom.

There was an influx of new investors last year. But the number of Americans who own stocks was at a generational low. More Americans owned stocks in 2005 than they do today.

Even with stocks ripping higher over the past decade, folks have been putting their money to work elsewhere. Data from the American Association of Individual Investors (AAII) shows ordinary folks aren’t exactly “up to their eyeballs” in stocks: 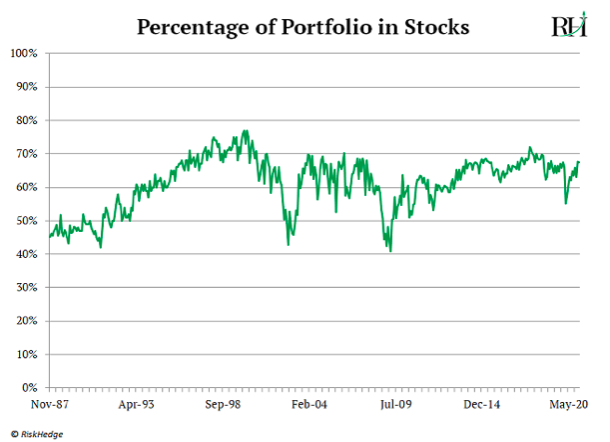 And get this: of the $3 trillion folks invested since 2008, just 6% went into stocks! Research from Wall Street firm Fundstrat shows the vast majority of these dollars went into bonds. This makes sense when you consider baby boomers have dominated American wealth for the past two decades. Most boomers are near or in retirement, so they bought “safe” bonds.

This Trend Is Set For A Dramatic Reversal

Tens of millions of young investors are flooding into the market. And millennials aren’t interested in owning boring bonds. This is a generation of stock pickers. Fundstrat estimates $6 trillion could flood into stocks over the next decade. And remember, millennials aren’t buying the S&P 500.

Related: Did GameStop Mark the Top?