How To Handle the “Twin Crises” Threatening Stocks

It’s the most overused word in finance…

And right now, markets are being tested by two “crises” at once.

You’ve likely noticed these “crises” are dragging down stocks, especially tech stocks. The Nasdaq just had its worst day since March. It’s now lost 6% in the last two weeks.

A 6% dip might not sound all that big… and it’s not. It’s a perfectly normal gyration that happens a few times a year.

But this dip feels worse to many folks, since it’s the first meaningful drop in the Nasdaq since May.

Today, we’ll look at the “twin crises” the media is focused on. And we’ll evaluate if and where you should shift your money in response to them…

The first scary crisis is the debt ceiling.

In the simplest terms, US Congress wants to borrow trillions more dollars, but it can’t. It’s running up against the ceiling designed to stop the US from drowning in debt.

Don’t waste one second worrying about this.

Every few years, the US government runs into money problems and threatens to shut down. Back in October 2013, the government did shut down. The earth kept spinning and stocks even ticked up a few percent during and after the shutdown!

The debt ceiling has been modified 98 times since WWII. I’m sure they’ll find a way to get it done again.

The second scary crisis is Evergrande…

Evergrande is a Chinese company and the largest real estate developer in the world.

It recently ran out of cash and warned investors it won’t be able to repay its debts. That’s concerning because Evergrande owes $305 billion—the largest amount of debt of any company in the world.

And now, it’s on the brink of collapse.

Yahoo Finance even asked, “Is Evergrande the next Lehman Brothers?”

That’s quite a statement. The collapse of revered investment bank Lehman Brothers was a once-in-50-years event.

Not only was it the biggest bankruptcy in US history. Lehman’s collapse plunged us into the darkest days of the 2008 financial crisis.

Panic gripped the market as the S&P 500 plummeted 44% in six months.

You can still feel the aftermath of the ‘08 crisis today.

It scared a whole generation of Americans into thinking the “next Lehman” could happen at any moment.

These stories are sad to me… but not for the reason you might think.

I’ve watched too many people in my life stay out of stocks since 2009.... thanks to scary-sounding stories just like these.

They missed out on quadrupling their money in the longest bull market in history. Because they’re always too nervous to invest.

I hope you’re not one of these investors.

One of the great investing lessons I’ve learned is there’s always something to be scared of in the markets. But 99% of the time, that fear is a false alarm.

It’s overwhelmingly likely that the current “crises” we’re facing are not the “next Lehman.”  They’re likely just the latest entry on a long list of things that were supposed to topple the market but never did.

Yet, the Nasdaq has handed investors 450% gains over the past decade and made a new high earlier this month. 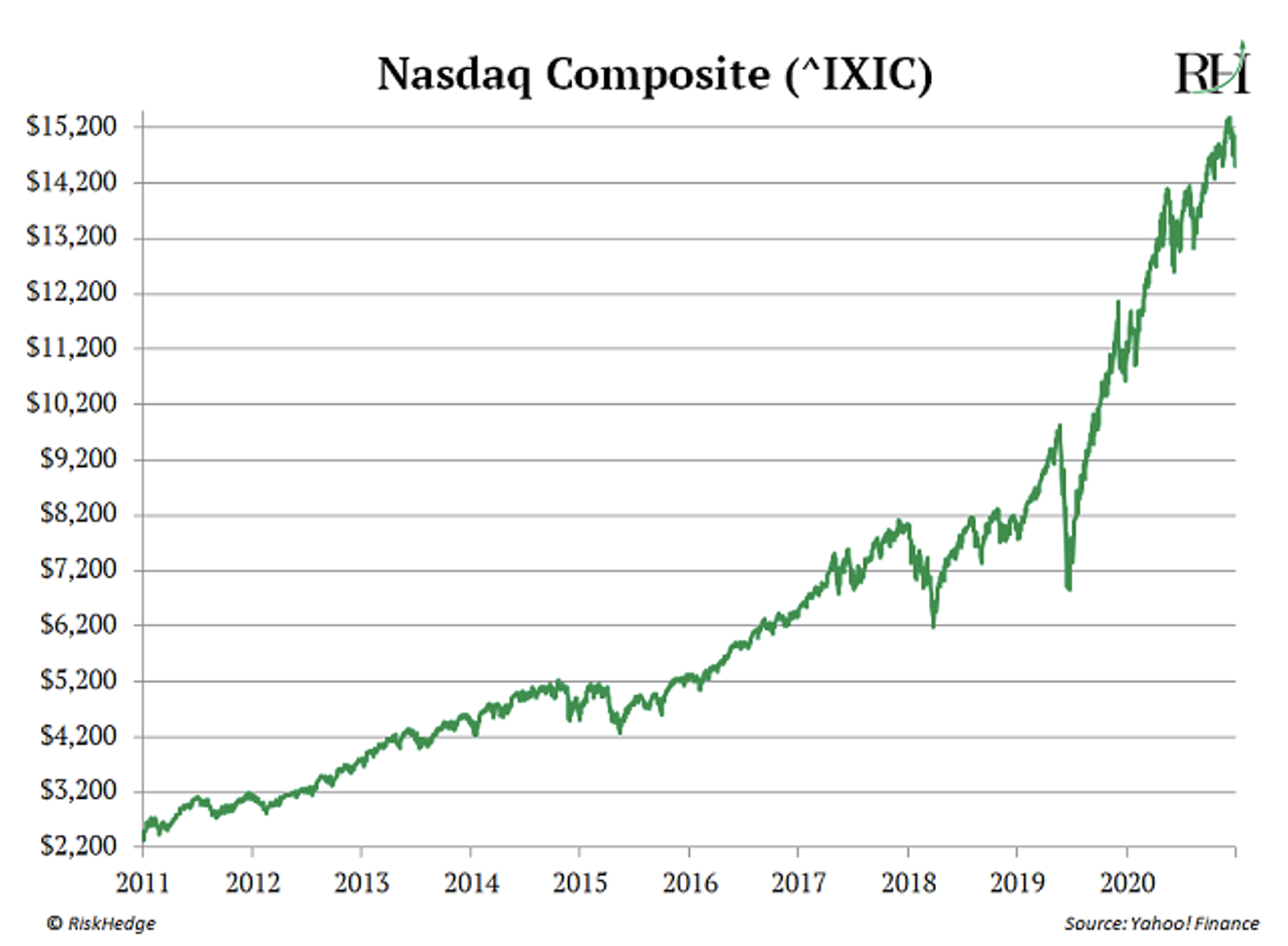 News outlets like CNBC and Bloomberg are obsessed with scary stories.

Please don’t let their obsession become your obsession. Because it’s toxic to your wealth and can cost you hundreds of thousands... or even millions... of dollars in investing profits over your lifetime.

Most folks listen to the media so they can make better-informed decisions. Unfortunately, the vast majority of investors fail to earn adequate returns...

Data from JPMorgan Asset Management shows the average investor made 2.9% annual returns over the past 20 years. That, simply put, is awful.

These folks could’ve nearly tripled their returns to 7.5% by buying the S&P 500 and doing nothing else! 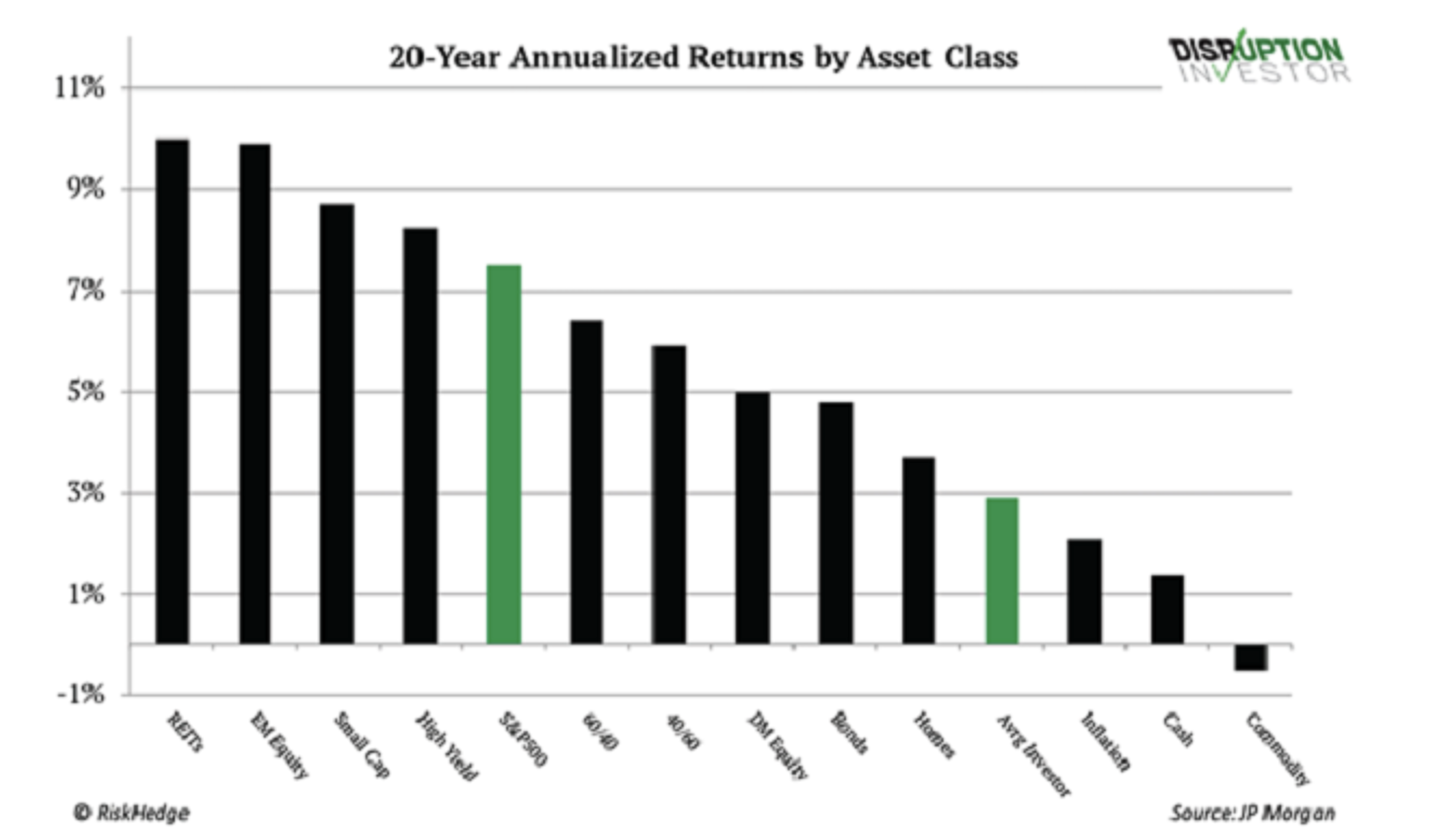 I’m convinced the media has a lot to do with this gap...

Harvard researchers have found investors who avoid financial news earned better returns than investors who were fed a constant stream of it.

Why? Above all else, investors are prone to shooting themselves in the foot. They read a scary headline and hit the sell button at exactly the wrong time.

I’m not saying financial journalists are out to ruin you. But most folks forget CNBC and others aren’t trying to help you make money. That’s not their business model. They are in the business of selling news and ads. They are entertainers, not stock market wizards.

The media sells you the financial equivalent of junk food.

It’s bad for your financial health.

Don’t let this latest batch of “crises” scare you out of the markets.

I’ll share this chart again because it’s so darn important: 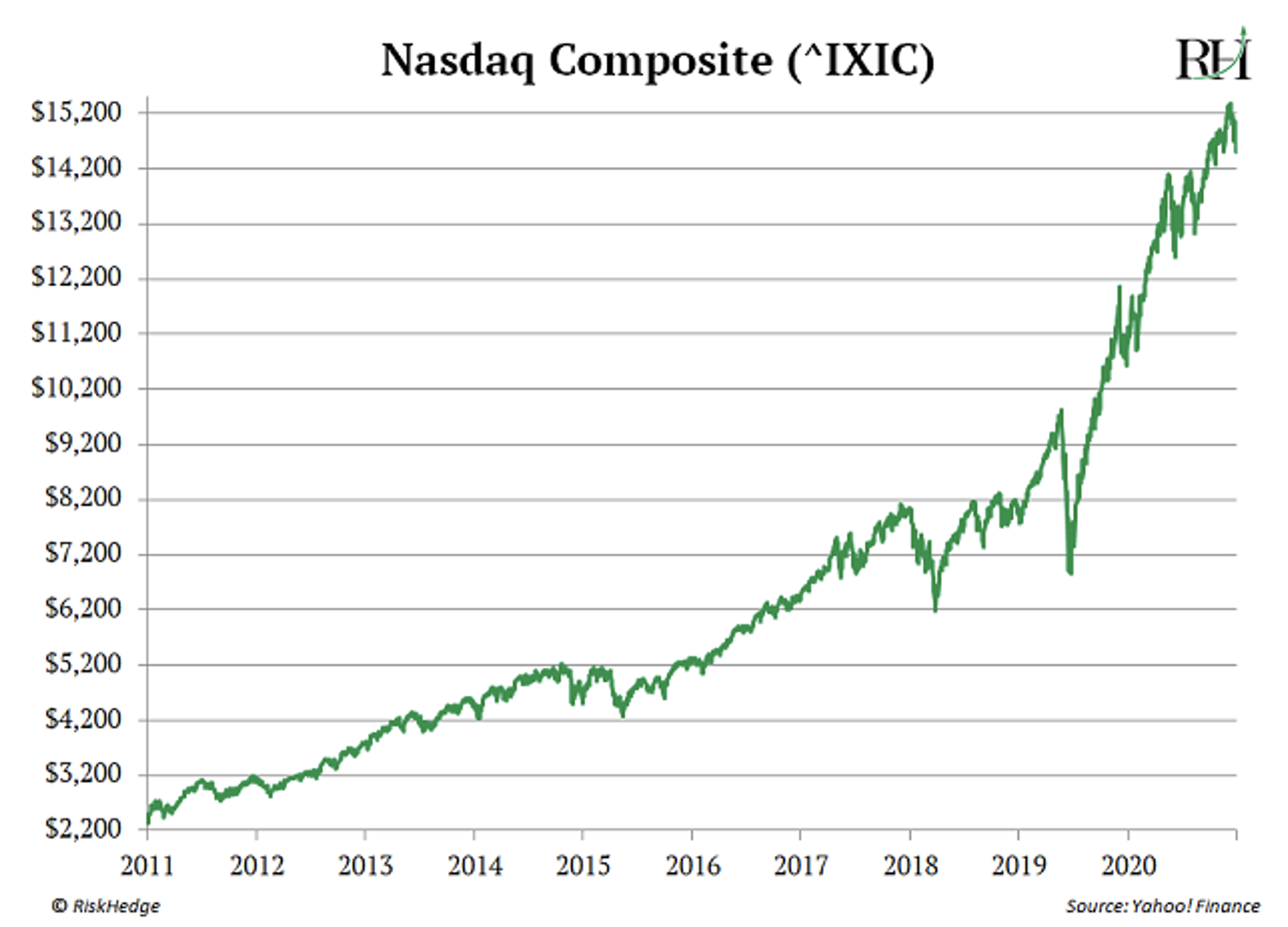 DESPITE a constant barrage of scary headlines.

We could extend that chart back another 90 years, to the 1930s. You’d see the same thing.

US stocks have risen over 100X—despite all the challenges we’ve faced.

To be clear, I’m not downplaying the risks of investing in stocks. There ARE risks. Significant ones.

But the financial media will not help you anticipate them.

Here’s the truth. On average, US stocks drop 10% roughly once a year. And once every 5–10 years, you should expect stocks to crash 30% or more.

So be smart with your investments. Be cautious. Have a plan that accounts for these risks, and stick to it. Practice proper position sizing and risk management.

But don’t obsess over the latest crisis.

PS: Do you agree with me? Or do you think I’m a reckless “permabull?” Tell me at Stephen@riskhedge.com.

Related: Why Every Serious Investor Should Be Focused on Blockchain Technology