Isabelle Rodriguez penned the tweet she would send from her grave. But 24-year-old Rodriguez wasn’t dying, or even ill. She was using Cake, a new “app” that lets you plan your funeral.

Selling death to young folks used to be a tough gig. But COVID has been a boon for funeral start-ups. Cake’s growth surged 5x last year, according to The New York Times. Its rival Lantern, which has features like a tombstone generator, saw its users more than double.

It’s not only “death startups” booming right now. Americans are starting their own businesses at the fastest rate EVER. That’s not a typo. The Economist magazine even wrote a feature story on this, saying: “The number of new businesses in America is booming.” In the last three months, more small businesses were launched than at any other time in history: 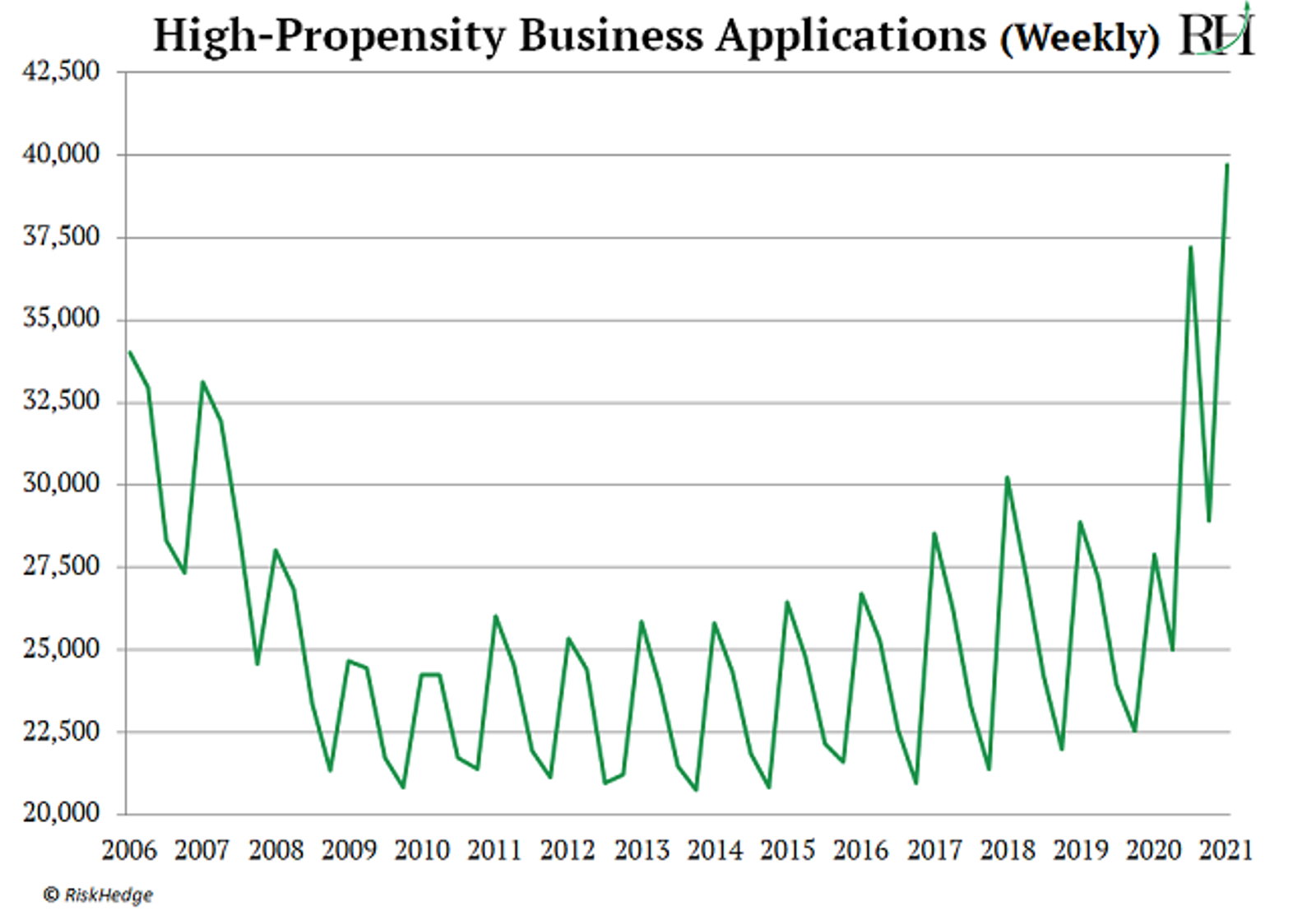 The truth is, COVID did disrupt thousands of mom-and-pop stores across America. And I feel for everyone who’s still struggling. But it also kickstarted a once-in-a-generation surge in startups. A record 4.4 million new business applications were processed last year. It’s by far the biggest jump on record.

In fact, it was the only recession in history where the number of new businesses went up. What the heck is going on? Two things:

One—this pandemic has been one huge “inertia” buster. For example, millions of Americans were stuck in jobs they hated but wouldn’t leave because they were “comfortable.”

COVID hit the reset button. The decision was made for them when businesses shut their doors and layoffs started. This freed them up to go start their own business and pursue a passion. And two:

It’s Easier Than Ever To Start a $100 Billion Company

In 2008, Brian Chesky’s tried a silly idea to make some cash. He put three inflatable mattresses in his spare bedroom and offered to rent them to attendees of an upcoming conference in town. Chesky built a basic website and advertised it as Air Bed and Breakfast.

Home sharing website Airbnb is now a $100 billion company. In fact, it now lists more rooms than major hotel chains Marriott and Hilton—combined! Chesky turned an idea into a global empire in just over a decade. This kind of rapid growth simply wasn’t possible until recently.

Starting a business used to be a real pain. Think about what it takes to build a hotel, for example. You have to hire expensive architects, get planning permission from the city, and jump through lots of hoops. Not to mention the millions of dollars in raw materials you’ll need.

But unlike Hilton or Marriott, Airbnb didn’t build or maintain hotels. Chesky and his small team simply registered a domain name, wrote computer code, and built an “app” that could be accessed from any smartphone.

Chesky recently said, “The reason it’s grown so fast is… we don’t have to pour concrete. All of a sudden, all you needed was the internet.” In short, technology has slashed the cost and effort it takes to get businesses off the ground. Now a couple of computer geeks like Airbnb’s founders can launch a $100 billion empire from a single laptop computer. In fact, research from top business school Wharton shows the cost of launching an internet business has dropped 1000x since the 1990s.

You Want to Invest in the Disruptors Enabling This Transformation

For the first time ever, Americans can cheaply and quickly launch a business from their kitchen table. For example, you don’t need to hire expensive consultants to build a website anymore. Now you can pay Shopify (SHOP) 30 bucks a month to handle all your online needs.

Longtime RiskHedge readers know Shopify builds online stores for entrepreneurs. From creating the website to shipping orders to processing payments, Shopify is a “one-stop shop” for anyone wanting to sell online. Today, it powers over 1.7 million businesses. And its stock has handed investors 3,500% gains over the past few years: 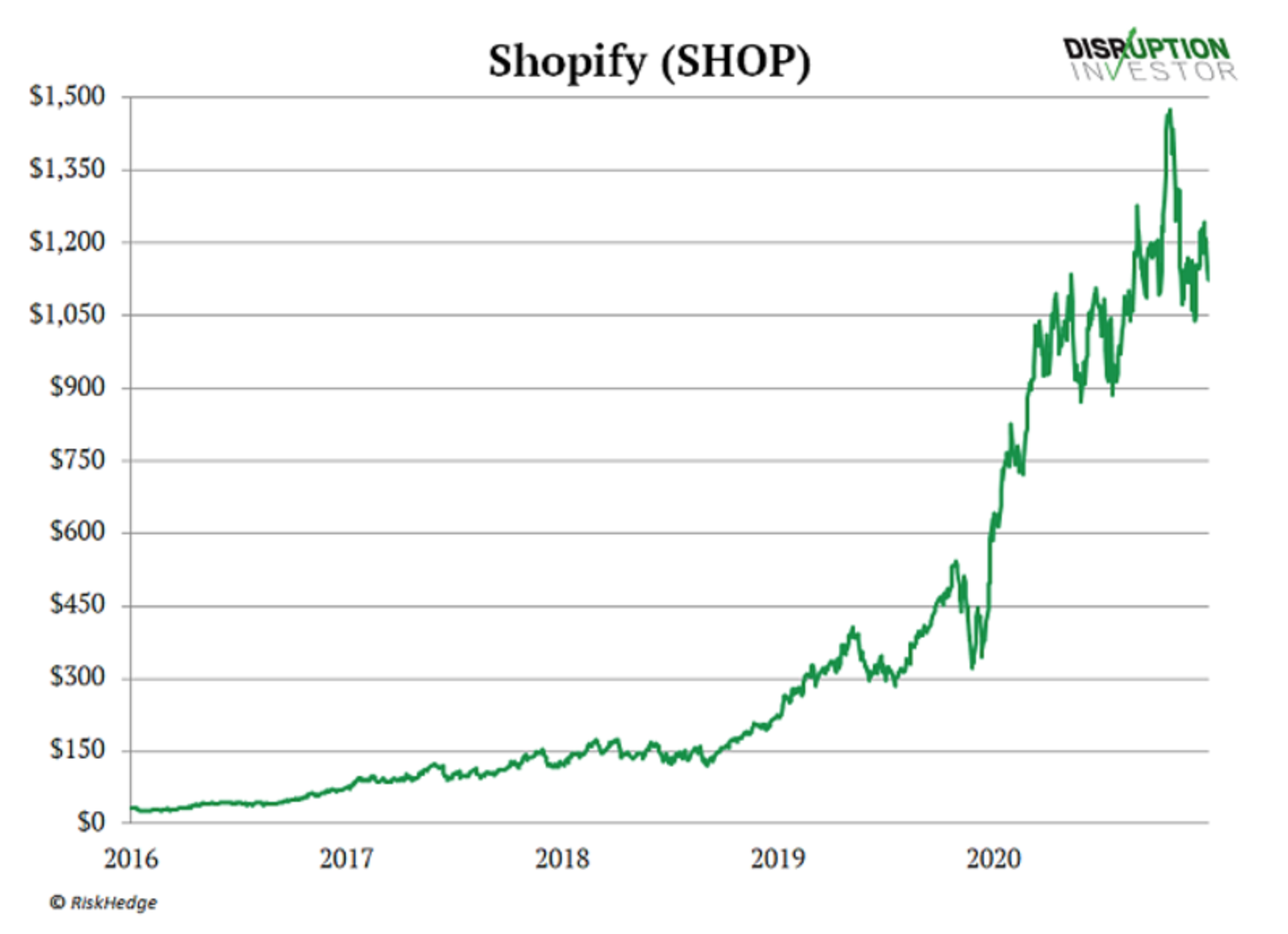 Etsy (ETSY) is another disruptor making starting a business easy. Etsy is an internet marketplace for artisans selling handcrafted, one-of-a-kind items. And it’s achieved something incredible: It’s opening up the world for mom-and-pop stores that were previously confined to their local community. Etsy’s stock has been on a tear: 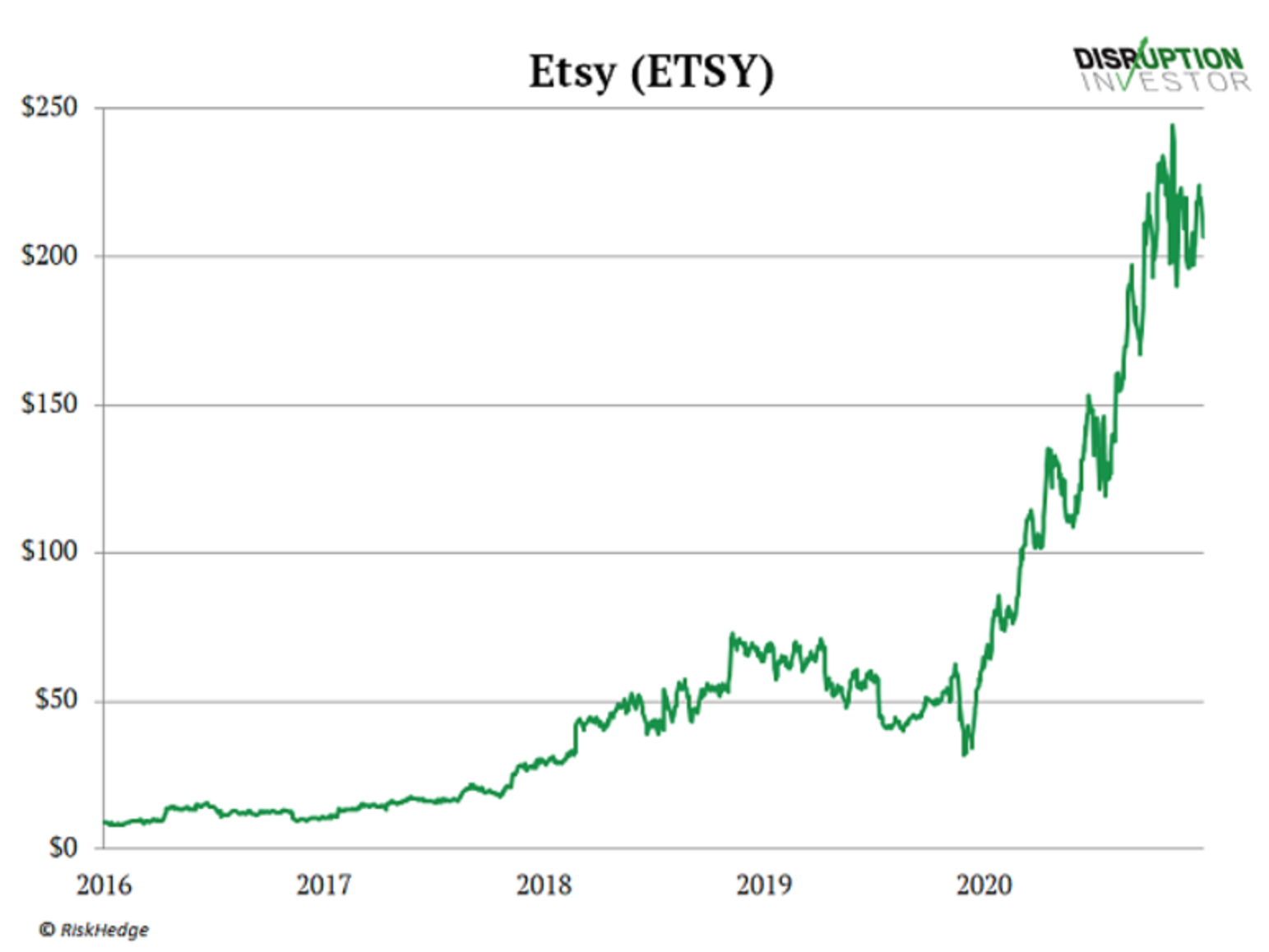 Ditto for money disruptor Square (SQ). I’m sure you’ve seen Square’s white “card reader” that plugs into any headphone jack. This genius invention instantly transforms any smartphone or tablet into a card reader. And it enabled millions of entrepreneurs to accept credit cards for the first time ever, without getting slammed with high fees.

Square processed $4.5 billion in payments in just the past three months. And its stock has handed out 250% gains in the past two years: 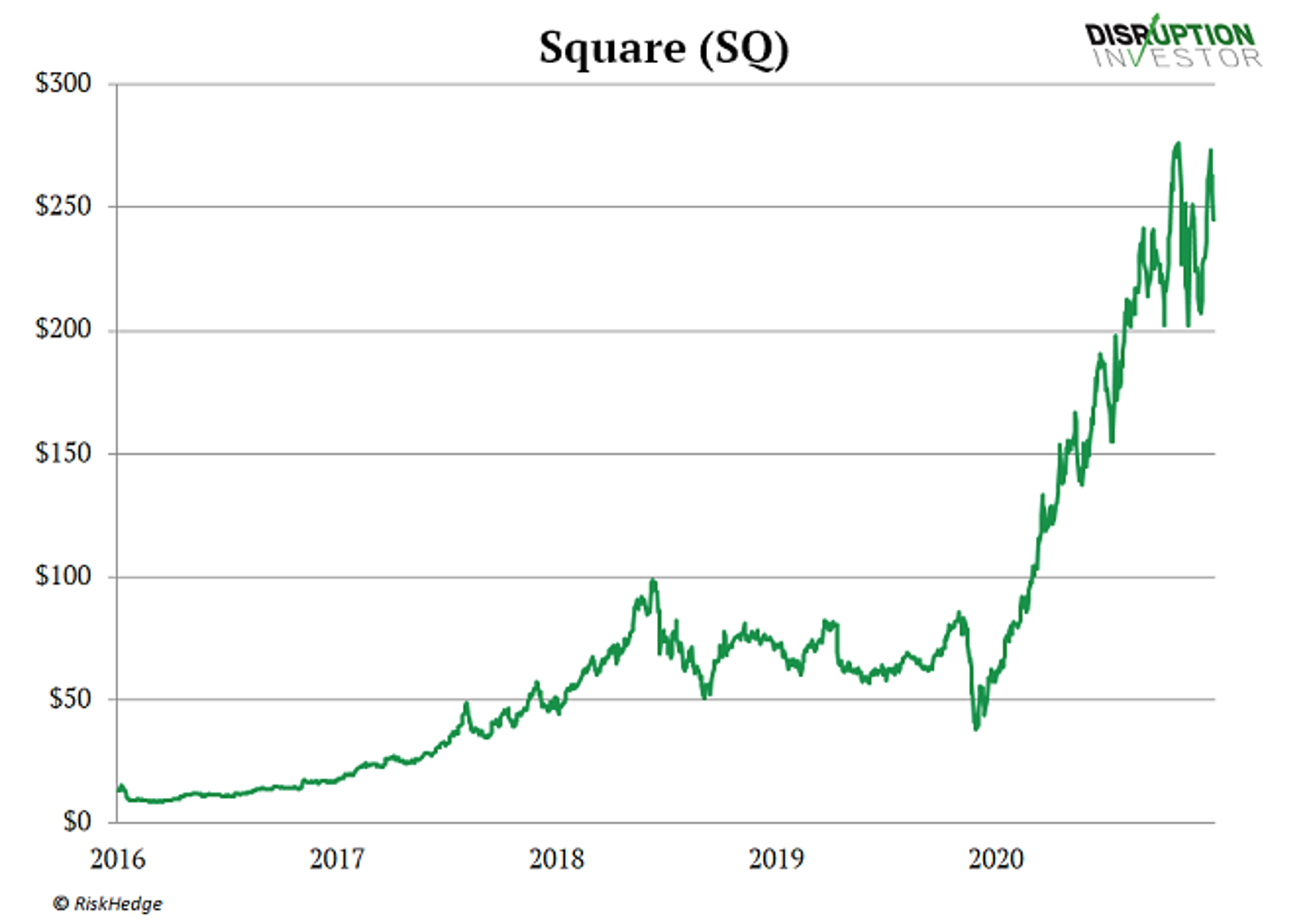 Disruption Leveled the Playing Field for the Little Guy

Remember, we just experienced the only downturn ever where the number of startups went up. “Entrepreneur stocks” like Shopify, Etsy, and Square fueled this unexpected boom. Their tools make it easy and cheap to start a business. So someone who got laid off during COVID could start a global business from their kitchen table. This was simply never possible before.

Before, you always had to get “permission” from someone to get off the ground. Beg the bank to give you a loan, cough up thousands of dollars in rent to open a store, and fill out government paperwork.

These disruptors made entrepreneurship permission-less. And they’re enabling a whole generation of Americans to start their own companies. As The Economist said: “No other rich-world country is experiencing the same rise in entrepreneurship.”

This is great for America, and should fuel years of rapid growth for these disruptors. Buying stocks like Shopify and Square is a surefire way to make money from the startup boom.

Related: All Tech Revolves Around This Disruptor