Will Policy Changes Open the Door to Higher Inflation?

Central banks are being forced to address many challenges—inequality, climate change, and debt management to name but three. Given these tensions, will controlling inflation retain its overriding precedence? As priorities change, we believe inflation is on the verge of an important shift higher. 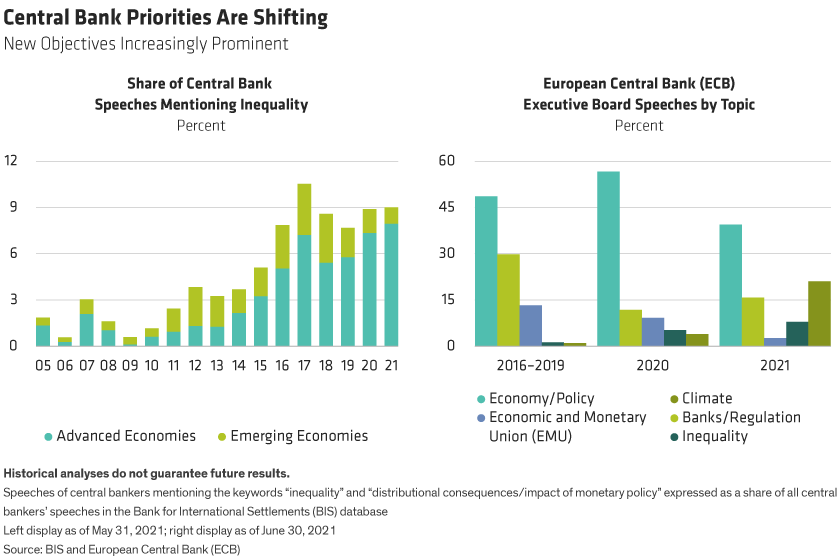 Until recently, central banks had a simple remit: maintain price stability. Now, they are being drawn into different areas: reducing inequality, supporting the green transition and so forth. If inflation becomes just another goal, there’s an increased risk that it will be traded off to focus on more pressing concerns.

The COVID-19 pandemic has already forced central banks to stretch their mandates. It would not have been possible for governments to support their economies over the past 18 months and let debt levels reach record peacetime highs without assistance from massive central bank balance-sheet expansion and bond purchases.

While most developed-world central bankers continue to target inflation at around 2%, recent speeches suggest that they may already be taking their eyes off the ball (Display, above). Few (if any) historical episodes of high inflation started out as deliberate attempts to drive the price level higher. Instead, inflation arose indirectly as policymakers pursued other goals. We expect the same thing to happen in coming years. New policy imperatives, such as climate change and populism, are likely to push policy in a direction that, over time, generates higher inflation. Crucially, this will be seen as an acceptable price to pay.

Over the past year, we have become more convinced that the world is on the cusp of a new, more inflationary era. That’s partly because COVID-19 has pushed government debt even further past the point of no return and partly because of the speed with which fiscal activism and quasi-monetary financing have been embraced. We’re also struck by the consensus now forming around the idea that debt levels don’t matter anymore. Leading policymakers in the US and Europe have backed huge stimulus packages irrespective of spending limits or prohibitions on monetary financing. Increasingly, monetary and fiscal policy are becoming joined at the hip.

Identifying secular shifts in real time is a difficult task. Back in the early 1980s, many economists wondered if they would ever beat inflation. But then, as now, the sand was shifting beneath their feet. Much that we once took for granted has changed—from the return of fiscal activism to breaking the taboo on monetary financing—and governments face huge, perhaps even existential, challenges. Viewed this way, it is hard to believe that the inflationary regime over the next decade will look the same as over the last. Writing in the early 1920s about the rampant inflation that had wiped out savings across Europe, John Maynard Keynes warned us not to regard recent experience as being immutable, “part of the permanent social fabric,” or to disregard the “warning of past misfortunes.” In the 1960s, Milton Friedman—who led the monetarist counterrevolution against Keynesianism—famously said that “inflation is always and everywhere a monetary phenomenon.” But that’s only half the story. The policy regime that allows those monetary conditions to arise is key. That’s why we think it’s more accurate to say that inflation is always and everywhere a political choice. After all, who doesn’t think 4.0% inflation is a small price to pay for saving the planet?