Till the Dollar Yields

S&P 500 staged a very risk-off rally, not entirely supported by bonds. Value declined, not reflecting rising yields. Paring back recent gains on a very modest basis was palpable in financials and real estate, while (encouragingly for the bulls) consumer discretionaries outperformed staples. That‘s a testament to the stock bull run being alive and well, with all the decision making for the medium-term oriented buyers being a choice of an entry point.

The brief short-term correction, the odds of which I saw as rising, is being postponed as the divergence between stocks and bonds grows wider on a short-term basis. Even the yield spreads on my watch keep being relatively compressed, expressing the Treasury markets doubts over the almost jubilant resilience in stocks. Make no mistake though, the path of least resistance for S&P 500 remains higher, and those trading only stocks can look forward for a great Dec return.

Faced with the dog and pony debt ceiling show, precious metals dips are being bought – and relatively swiftly. What I‘m still looking for to kick in to a greater degree than resilience to selling attempts, is the commodities upswing that would help base metals and energy higher. These bull runs are far from over – it ain‘t frothy at the moment as the comparison of several oil stocks reveals.

It‘s still about the dollar mainly:

(…) The elephant in the room is (the absence of) fresh debt issuance lifting up the dollar, making it like rising yields more. Not only that these are failing to push value higher, but the tech resilience highlights the defensive nature of S&P 500 performance. Crucially though, precious metals are seeing through the (misleading dollar strength) fog, and are sharply rising regardless. Make no mistake, with the taper reaction, we have seen what I had been expecting (or even better given that I prefer reasonably conservative stance without drumming up expectations either way) – I had been telling you that the hardest times for the metals are before taper.

Commodities and cryptos are feeling the greenback‘s heat most at the moment. It remains my view though that we aren‘t transitioning into a deflationary environment – stubborn inflation expectations speak otherwise, and the Fed‘s readiness to face inflation is being generally overrated, and that‘s before any fresh stimulus is considered. 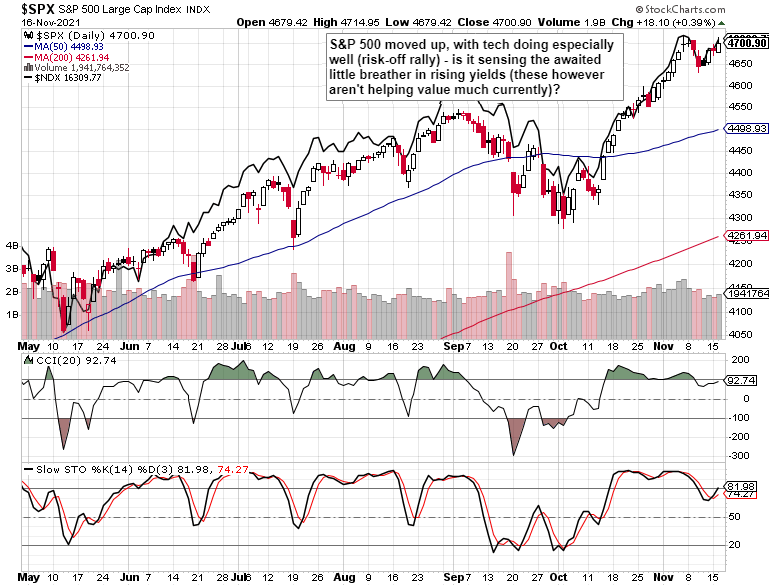 S&P 500 bulls recaptured the reins in the very short-run, but it‘s the upswing sectoral internals that‘s preventing me from sounding the all clear.

Credit markets look to be potentially stabilizing in the very short run – it‘s too early to draw conclusions.

Gold and silver declined, but the volume doesn‘t lend it more credibility than what‘s reasonable to expect from a correction within an uptrend. Forthcoming miners performance is key to assessing the setback as already over, or not yet. 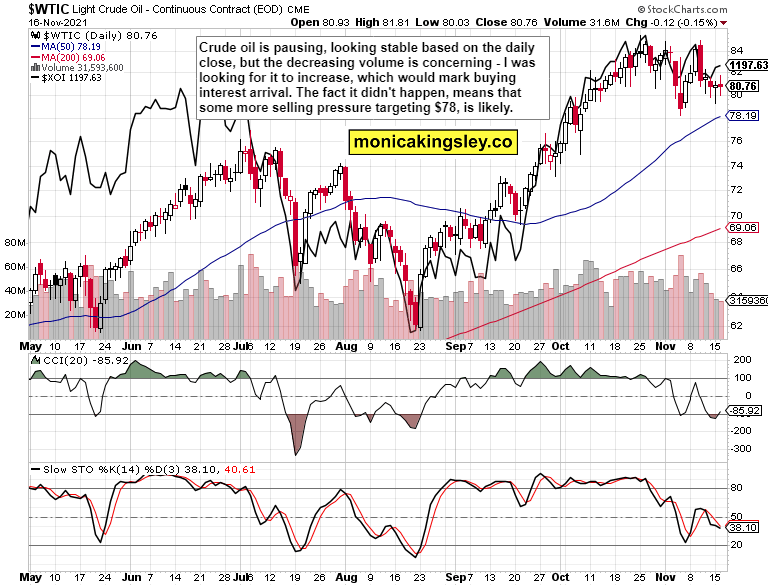 Crude oil bulls didn‘t got anywhere, and the oil sector resilience is the most bullish development till now. The absence of solid volume still means amber light, though.

The copper setback is getting extended, possibly requiring more short-term consolidation. Unless commodities swing below the early Nov lows, the red metal won‘t be a source of disappointment. 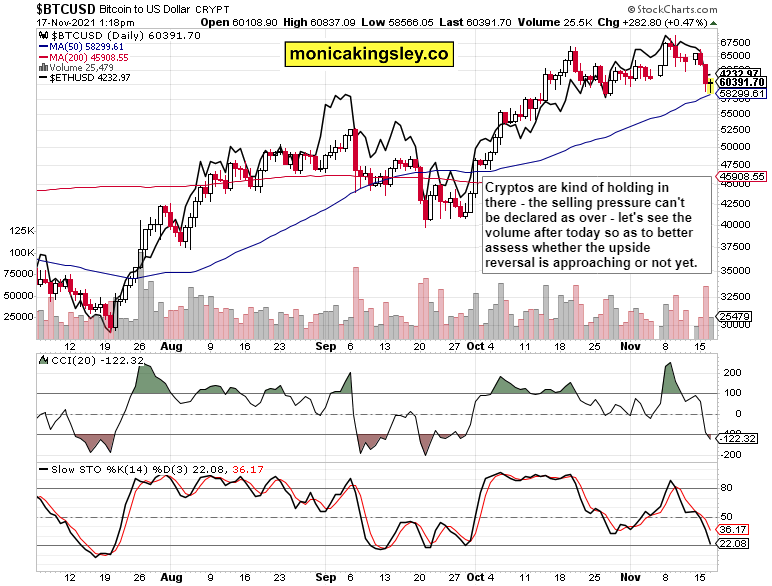 Bitcoin and Ethereum crack in the dam is still apparent and open – the bulls haven‘t yet returned prices to the recent (bullish) range. I‘m though looking for a positive Dec in cryptos too, and chalk current weakness to the momentary dollar strength.

S&P 500 bulls leveled the short-term playing field, but the credit markets non-confirmation remains. Even though this trading range might not be over yet, it would be followed by fresh ATHs. Precious metals still have a lot of catching up to do, and will lead commodities into the debt ceiling showdown, after which I‘m looking for practically universally brighter real asset days – inflation expectations aren‘t declining any time soon.

Related: What’s Red Hot and Running in the Market?