The Most Passive Way to Invest Outside of the US

Tackling volatility with a 50% currency hedge.

The latest bout of volatility has not only been isolated to equities and fixed income, but can clearly be seen with international currencies. When global issues arise, geographic diversification is important, which is why most employ an allocation to international equities, but currencies can also relatively strengthen and weaken affecting both returns and volatility.

Beginning right at the start of the 4th Quarter 2019, developed international currencies rallied mostly in concert with an average return of roughly 3.5%, making unhedged international equity a very timely exposure for those 3 months, as unhedged would see the supplemental benefits of the currency return.

As market volatility picked up at the turn of 2020, and then accelerated with the COVID-19 drawdown, some interesting things began to happen with currencies. Relative to the US Dollar the British Pound strengthened, the Euro weakened, and the Yen strengthened. Then, around the end of February when the global spread of the virus accelerated, the Pound wavered between strength and weakness, the Euro strengthened over 5%, and the Yen dropped almost 8%, all in a matter of a couple weeks. How can investors possibly decide between an unhedged or hedged exposure with the multi-directional volatility? 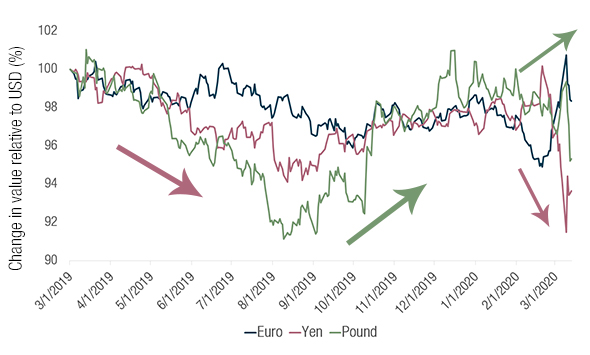 Source: Bloomberg, as of 3/12/20. Past performance is no guarantee of future results, which will vary. 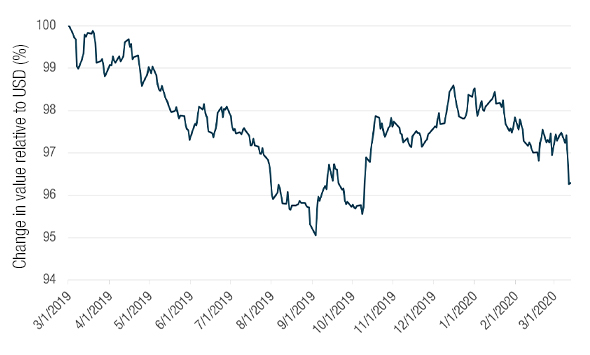 Point to point, being hedged would have benefitted the investor, but what if assets were invested in September of 2019? The choice to hedge would have disadvantaged the investor relative to unhedged by as much as 3.5% in less than 3 months.

The clear solution, especially in the current environment, is to take the middle-ground passive exposure. Partial participation in foreign currency gains, partial protection of foreign currency weakness – in other words 50% currency hedged. Utilizing the 50% currency exposure provides a way to step back from asset contribution, distribution, and rebalancing timing relative to where currencies are. It is arguably the most passive way to invest outside of the US.

Related: How to Get True Passive International Exposure