The headline above is but one of countless times Fed Chairman Powell and his colleagues confidently said their policies do not result in wealth or income inequality. Their political stature and use of complex economic lingo give weight to their opinions in the media. Nevertheless, a deep examination of the Fed’s practices and their consequences leaves us to think otherwise.

In our opinion, the Fed’s contribution to wealth inequality is significant and grossly misunderstood. We have written articles explaining why QE and low interest rates generally benefit the wealthy and harm the poor. This article backs up those prior arguments with quantitative muscle.

Timely for investors, we also draw some lines between wealth inequality and financial stability and their relationship to monetary policy. We think it is becoming increasingly possible wealth inequality, and in particular, the outsized effect inflation has on the poor, could be the needle to pop many asset bubbles. The other possible needle is the Fed’s wanting for financial stability.

**Due to the importance of monetary policy from economic, societal, and market perspectives we are breaking this article into two. We will share part two next week.

In our article Two Percent for the One Percent, we explain why inflation is detrimental to the poor, while rising asset prices (financial stability) primarily benefit the wealthy. The following paragraphs from the article explain:

“With that in mind consider inflation from the standpoint of those living paycheck to paycheck. These citizens are often paid on a bi-weekly basis and spend all of their income throughout the following two weeks. In an inflationary state, one’s purchasing power or the amount of goods and services that can be purchased per dollar declines as time progresses. Said differently, the value of work already completed declines over time.  While the erosion of purchasing power is imperceptible in a low inflation environment, it is real and reduces what little wealth this class of workers earned. Endured over years, it has adverse effects on household wealth.”

“Now let’s focus on the wealthy. A large portion of their earnings are saved and invested, not predominately used to pay rent or put food on the table. While the value of their wealth is also subject to inflation, they offset the negative effects of inflation and increase real wealth by investing in ways that take advantage of rising inflation. Further, the Fed’s historically low-interest-rate policy, which supports 2% inflation, allows the more efficient use of financial leverage to increase wealth.”

In no uncertain terms, Fed members make it clear, they want more price inflation. Unfortunately, inflation is not best for everyone. Inflation affects different income classes vastly differently. The disparity is most accentuated with necessities, such as food and housing prices.

Spending on food and shelter comprise over 75% of the after-tax income of the lowest income classes but only about 25% for the highest income classes. The graphs below, courtesy of Brett Freeze, compare food and shelter spending across multiple income classes. In each illustration, the bar chart on the left shows the total food or shelter expense as a percent of after-tax income.  The charts to their right are the sub-components expenditures that comprise the total. 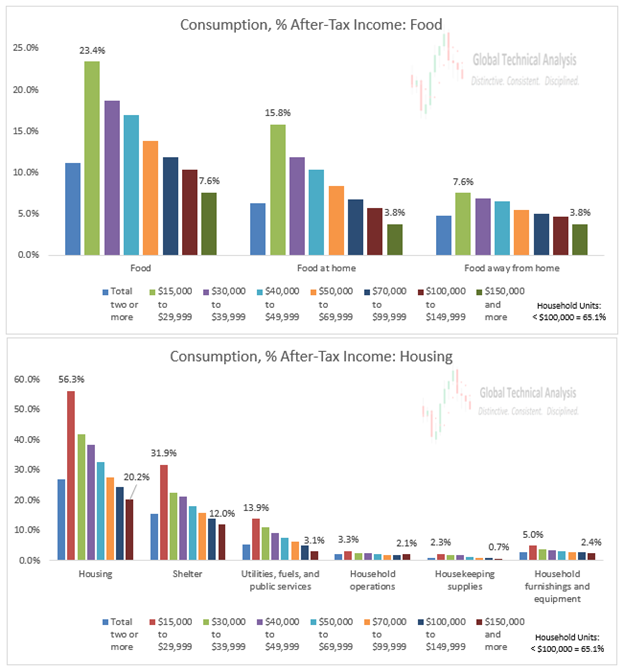 Over the last year, the BLS reported food and beverage prices rose at an average annual rate of 8.84%. For a family in the $15,000 – $29,999 income class, total spending would have to rise by 2.07% on average to consume the same amount of goods and services as a year ago. The increase only accounts for higher food prices. For the highest income class, their change was only .67%.

Housing prices, over the same period, rose on average by 7.07%. For a family in the lowest income class, this one expense pushes their total expenses up by 3.98%. The families in the highest income class will pay 1.42% more.

Who Can Afford Inflation?

The graph below, courtesy of Congressional Research Service – The U.S. Income Distribution: Trends and Issues, quantifies changes in income by income class. The data allows us to assess if wage inflation can offset price inflation. 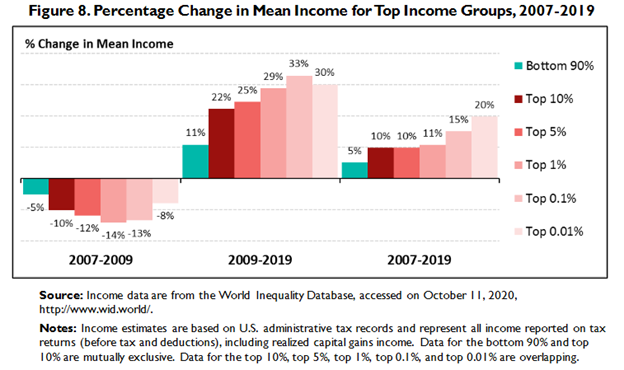 The current annual increases in food and housing costs will require an additional 6.05% of income for the lowest wage earners to keep their financial position indifferent. Any amount less than that and they fall behind. Keep in mind that does not cover inflation for any other expenditures.

Stimulus checks may fill the immediate gap, but in the long-run inflation makes their financial difficulties worse.

The highest income earners will need to earn 2.10% more in income to cover recent price increases. Fortunately for them, that is below the recent rate of annual income increases.

The data above is further affirmed by the latest BLS employment data released May 7, 2021.  Per the BLS, wages rose 0.3% over the last year versus a 4.2% increase in CPI.

Why Investors Should Care

If the prices of food, shelter, and other necessities continue to surge higher without equivalent wage growth, wealth inequality will worsen. This problem represents a coming dilemma for the Fed.

When the media and politicians take notice, they will pressure the Fed on their inflation stance. If the Fed is persuaded or even forced to act, bubbles driven by the latest round of excessive liquidity, are likely to deflate.

Growing wealth inequality may be a needle in search of a bubble.