That’s Why You Buy the Dips

Days like Tuesday (Mar. 9) are why you buy the dips. It was nothing short of a reverse rotation from what we’ve seen as of late. Bond yields moved lower; tech stocks popped.

That’s why I called BUY on the Nasdaq.

Inflation fears and the acceleration of bond yields are still a concern. But it looks as if things are stabilizing, at least for one day. The lesson here, though, is to be bold, a little contrarian, and block out the noise.

Unless you’ve been living under a rock, you know that recent sessions have been characterized by accelerating bond yields driving a rotation out of high growth tech stocks into value and cyclical stocks that would benefit the most from an economic recovery. The Nasdaq touched correction territory twice in the last week and gave up its gains for the year.

But imagine if you bought the dip as I recommended.

The Nasdaq on Tuesday (Mar. 9) popped 3.7% for its best day since November. Cathie Wood’s Ark Innovation ETF (ARKK) surged more than 10% for its best day ever after tanking by over 30%. Semiconductors also rallied 6%.

In keeping with the theme of buying the dip, do you also know what happened a year ago yesterday to the date? The Dow tanked 7.8%!

There’s no way to time the market correctly. If you bought the Dow mirroring SPDR DJIA ETF (DIA) last March 9, you’d have still seen two weeks of pain until the bottom. However, you’d have also seen a gain of almost 36% if you bought that dip and held on until now.

Look, I get there are concerns and fears right now. The speed at which bond yields have risen is concerning, and the fact that another $1.9 trillion is about to be pumped into a reopening economy makes inflation a foregone conclusion. But let’s have a little perspective here.

Bond yields are still at a historically low level, and the Fed Funds Rate remains 0%.

So is the downturn overblown and already finished?

Time will tell. I think that we could still see some volatile movements over the next few weeks as bond yields stabilize and the market figures itself out. While I maintain that I do not foresee a crash like what we saw last March and feel that the wheels remain in motion for an excellent 2021, Mr. Market has to figure itself out.

Most importantly, a correction right now would be an excellent buying opportunity. Just look at the Nasdaq Tuesday (Mar. 9).

It can be a very tricky time for investors right now. But never, ever, trade with emotion. Buy low, sell high, and be a little bit contrarian. There could be some more short-term pain, yes. But if you sat out last March when others bought, you are probably very disappointed in yourself. Be cautious, but be a little bold too.

You can never time the market.

There is optimism but signs of concern. The market has to figure itself out. A further downturn is possible, but I don’t think that a decline above ~20%, leading to a bear market, will happen any time soon.

Nasdaq- That’s Why I Called BUY 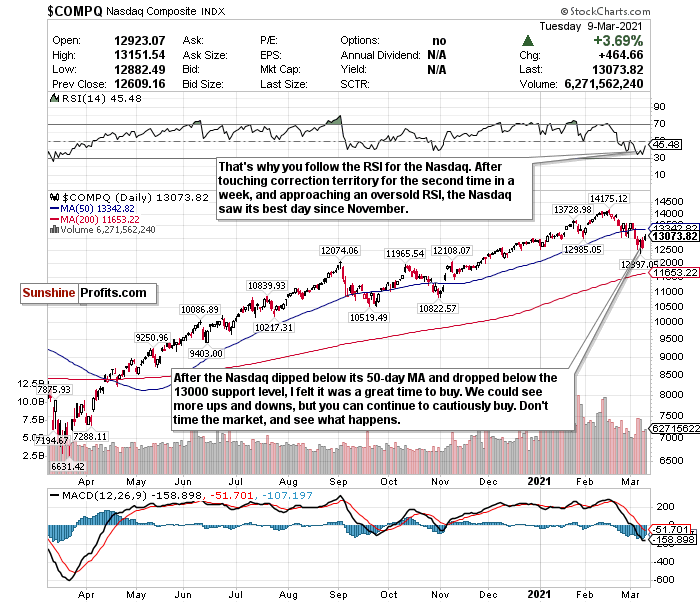 For the second time in a week, the Nasdaq hit correction territory and rocketed out of it. It saw its best day since November and proved once again that with the Nasdaq, you always follow the RSI. There could be more uncertainty over the next few weeks as both the bond market and equity market figure themselves out. However, the Nasdaq declines were very buyable, as I predicted.

If you bought the dip before Tuesday’s (Mar. 9) session, good on you. Be a little bit bold and fearless right now. Take Ark Funds guru Cathie Wood, for example. Many old school investors scoffed at her comments on Monday (Mar. 8) after she practically doubled down on her bullishness for her funds and the market as a whole. After crushing 2020, her Ark Innovation Fund (ARKK) tanked over 30%. Many called her the face of a bubble. Many laughed at her.

I’m not saying that we’re out of the woods with tech. All I’m saying is don’t try to time the market, don’t get scared and have perspective.

The Nasdaq is once again roughly flat for the year, its RSI is closer to oversold than overbought, and we’re still below the 50-day moving average, near a 2-month low, and right around support at 13000.

Mike Wilson , chief investment officer at Morgan Stanley, had this to say about recent tech slides- “I don’t think this is the end of the bull market or the end of tech stocks per se, but it was an adjustment that was very necessary.”

I like the levels we’re at, and despite the possibility of more “adjustments” in the short-run, it’s a good time to BUY. But just be mindful of the RSI, and don’t buy risky assets. Find emerging tech sectors or high-quality companies trading at a discount.

For an ETF that attempts to correlate with the performance of the NASDAQ directly, the Invesco QQQ ETF (QQQ) is a good option.

For more of my thoughts on the market, such as when small-caps will be buyable, more thoughts on inflation, and emerging market opportunities, sign up for my premium analysis today.

Related: Is the Market Downturn Overblown and Already Over?