End of the month and first quarter of 2021. Is time going fast or slow? Markets have been moving at a dizzying pace to start the year.

The first quarter of 2021 is officially almost finished. Time flies when you’re having fun, right? While a broad correction did not happen by now, as I expected, the Nasdaq did enter correction territory twice since February. Despite the Nasdaq’s muted moves on Tuesday (Mar. 30), it’s right on the edge of its third foray into correction territory.

The market themes remain. There is still as much uncertainty for tech stocks as there were at the start of March. Until there’s some clarity on inflation and bond yields, I can’t foresee this ending anytime soon.

Consider this too. President Biden is about to unveil a $2 trillion infrastructure plan during Wednesday’s session (wasn’t it supposed to be $3 trillion?). While this is great for America’s crumbling infrastructure, let’s be honest- does this economy, while recovering, need anymore spending?

Plus, how do you think he will pay for this? Hiking taxes- namely corporate taxes . Those gains that high growth stocks saw after Trump cut corporate taxes in 2017 could very well go away. The market may have priced in a lot of optimism. It may have already priced in some pessimism from potential inflation. But one thing it has not priced in is a possible tax hike.

However, despite the “what ifs,” for now, three pillars remain in motion as a strong backdrop for stocks:

The market has to figure itself out.

More volatility is likely, and we could experience more muted gains than what we’ve come to know over the last year. Inflation, interest-rate worries, and the potential for tax hikes should be the primary tailwinds. However, a decline above ~20%, leading to a bear market, appears unlikely for now. 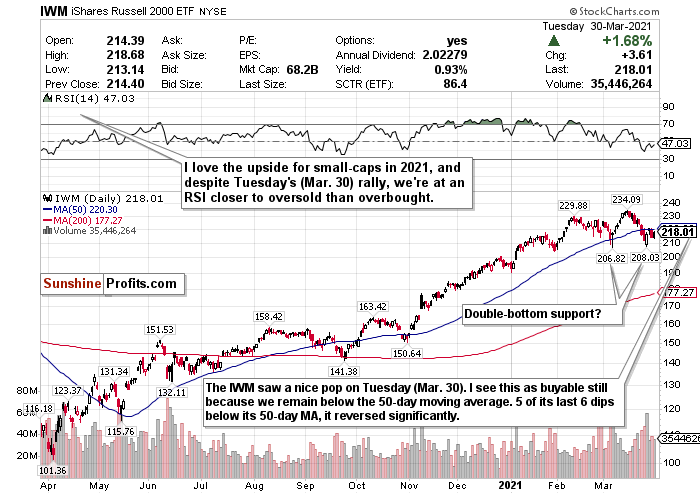 The climate right now supports the Russell 2000. The current economic policy is tailor-made for small-caps. The best part, though? The Russell is still very buyable.

I kicked myself for not calling BUY on the Russell after it saw a minor downturn during the second half of February. I wasn’t going to make that mistake again.

After the iShares Russell 2000 ETF (IWM) went on its latest rally to start March, I checked out the chart. I noticed that almost every time it touched or minorly declined below its 50-day moving average, it reversed.

Excluding the recovery in April from last year’s crash, 5 out of the previous 6 times the Russell did this with its 50-day, it saw a sharp reversal. The only time it didn’t was in October 2020, when the distance between its 50-day and its 200-day moving average was a lot more narrow.

Now, as we start the final week in March, we may be looking at the 6th reversal after dipping below its 50-day. The IWM has been up about 3% since March 24.

Aggressive stimulus, friendly policies, and a reopening world bode well for small-caps in 2021. I think this is something you have to consider for the Russell 2000 and maybe overpay for.

Consider this too. The Russell is on track for its first losing month in almost five months. According to the chart, it may have also found double-bottom support.

Based on macro-level tailwinds, its first losing month in five, potentially finding double-bottom support, its RSI, and where it is in relation to the 50-day moving average, I feel that this is a solid time to BUY.

For more of my thoughts on the market, such as tech, inflation fears, and why I love emerging market opportunities, sign up for my premium analysis today.

Related: The Three Pillars for Stocks