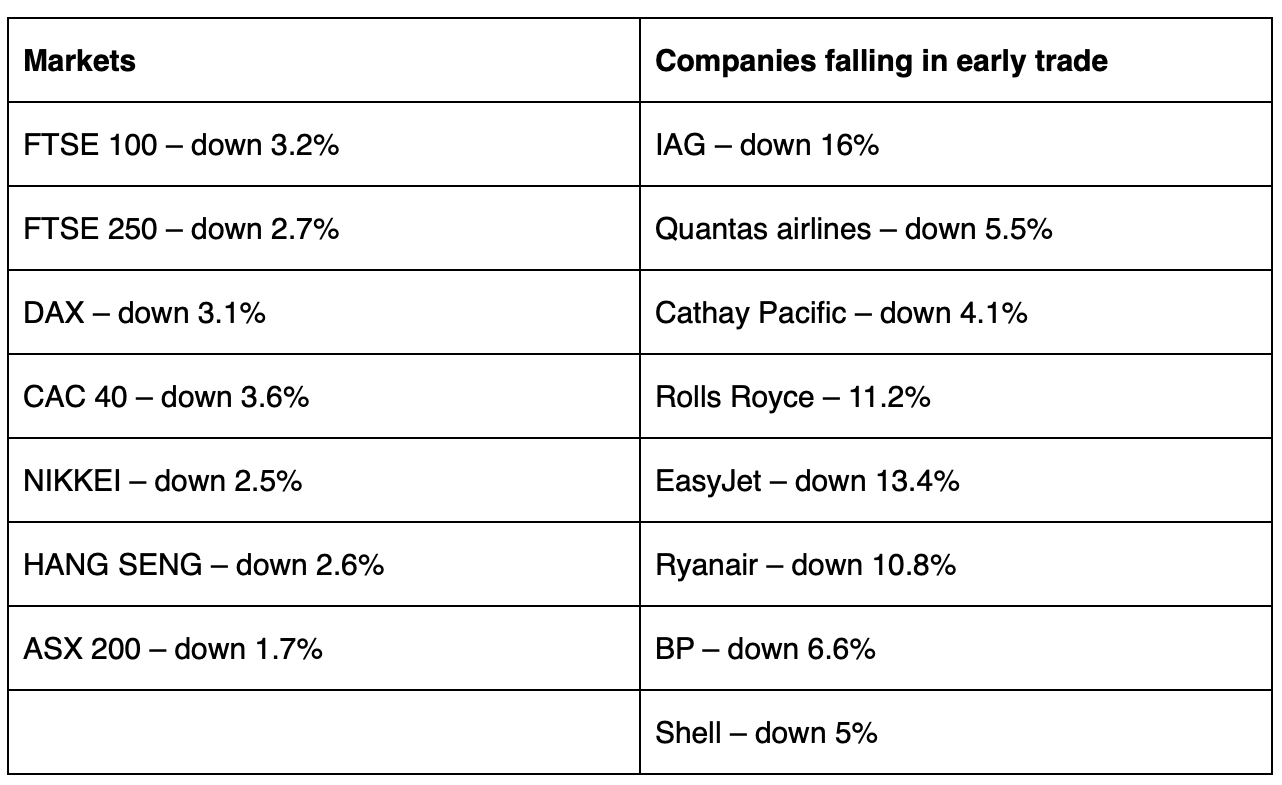 Fear has gripped the financial markets with the travel industry flying into another violent storm, after the discovery of a new Covid strain which could be far more contagious and may render vaccines less effective.

London’s FTSE 100 reversed the slight gains of the week plunging 3.2% in early trade, while the FTSE 250 opened down 2.7%. Oil has also fallen back with a barrel of the benchmark Brent Crude 2.7% lower at just over $80 a barrel over worries of lower global demand and that’s hit energy stocks with BP tumbling 6.5% in early trade and Shell 5.5% lower.

With Europe still battling with the surge of a fourth wave of the virus, there are now fears that the highly mutated Covid strain discovered in states in Southern Africa will prompt fresh shutdowns around the world in an attempt to stop its spread, leading to another drag on recovery. The description of the mutations as ‘horrific’ and of ‘great concern’ by scientists had already spooked Asian markets with Japan’s Nikkei sliding 2.5% and Hong Kong’s Hang Seng by 2.6%. The fear has filtered into European markets, which had already been rattled this week by spiking cases in the region. The DAX, CAC 40, Euro STOXX 100 all took a fresh tumble on the open.

The decision by the UK government to impose stringent quarantine rules on six southern African countries within hours has severely rattled the travel and tourism industry. It’s set off a fresh bout of extreme turbulence for the travel sector.  British Airways owner IAG nosedived 16% in early trade with investors deeply disturbed that demand for long haul transatlantic flights could be badly affected. Rolls Royce followed the descent, plunging by 11%, as the development could prove another major upset for its core business of making and servicing engines for long-haul aircraft. easyJet, Ryanair, TUI and Wizz Air also plummeted in early trading, registering much sharper falls than earlier drops of Quantas on Australia’s ASX which fell 5.5%, and Hong Kong listed Cathay Pacific which was 4.1% lower.

The immediate way the tough restrictions were imposed was a reminder of just how tied companies’ fortunes are to snap government decisions and the latest twists in the trajectory of the virus.

This fresh fall in confidence is the last set-back the industry needed given that it’s already faced with lockdowns in Europe. There had been high hopes of a bounce back in bookings, with Black Friday travel deals launched by airlines including British Airways and easyJet to lure people back into seats. But it’s going to take much more than a discounted ticket to calm nerves and restore optimism, particularly as many travellers have become weary of the rounds of cancellations they’ve experienced over the much of the last two years.’