The S&P 500 index topped the 4,400 level yesterday despite the ongoing Russia-Ukraine conflict news. Will the uptrend continue?

The broad stock market index gained 1.86% on Wednesday following its Tuesday’s decline of 1.6%, as it fluctuated following last week’s rebound from the new medium-term low of 4,114.65. It was 704 points or 14.6% below the January 4 record high of 4,818.62. So the sentiment improved recently, but there’s still a lot of uncertainty concerning the ongoing Russia-Ukraine conflict news. Yesterday the index went slightly above the 4,400 level and it was the highest since Feb. 17.

For now, it looks like an upward correction. However, it may also be a more meaningful reversal following a deep 15% correction from the early January record high. This morning the S&P 500 index is expected to open 0.6% higher following better-than-expected Unemployment Claims number release. However, we may see some more volatility. 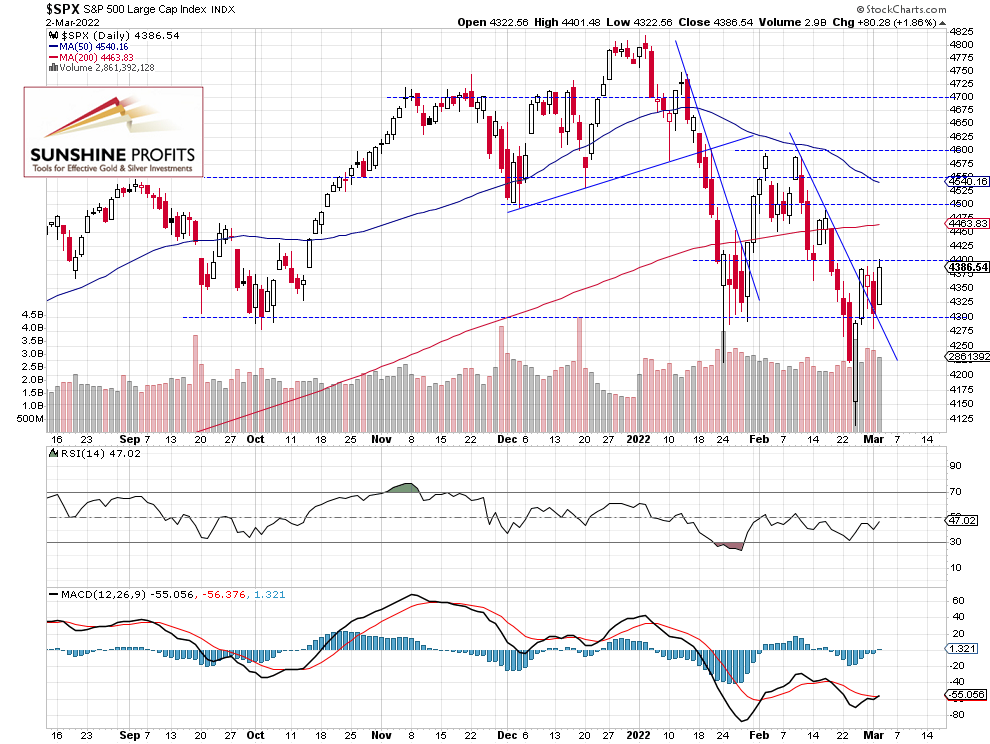 Let’s take a look at the hourly chart of the S&P 500 futures contract. On Thursday it sold off after breaking below the 4,200 level. And since Friday it was trading along the 4,300 mark. This morning it is trading along the local highs.

We are maintaining our profitable long position, as we are still expecting an upward correction from the current levels (chart by courtesy of http://tradingview.com):

The S&P 500 index will likely open 0.6% higher this morning. We may see more short-term fluctuations and obviously, the markets will continue to react to the Russia-Ukraine conflict news.

Related: Volatility Is Here to Stay