Stocks or Gold: Which Is in the Catbird Seat?

S&P 500 spurted higher after prior days of tiny gains. Still lining up the upper border of the Bollinger Bands on the daily chart, stocks keep defying gravity. But the corporate credit markets are sending a gentle warning sign as they failed to move higher in unison on Friday.

Given the Fed support and liquidity injections talked on Friday:

(…)   the Powell bid is in, affecting „traditional“ sectoral dynamics of rotation. Value is probably about to feel the heat if you look at the very long lower knot in financials (XLF ETF) yesterday. Yes, this interest rate sensitive sector still rose in the face of long-dated Treasuries‘ gains. Needless to say, technology loved that, and its heavyweights ($NYFANG) keep driving the sector up. It looks to be a question of time before Tesla (TSLA) joins – Square (SQ) already did.

The spanner in the works proved to be long-dated Treasuries as these gave up all intraday gains, and closed in a non-bullish fashion. The retreat in rising yields is running into headwinds, much sooner than the 10-year one could reach the low 1.50%  figure at least. Value stocks and cyclicals such as financials appear calling it out, and both rose on Friday – and so did industrials and technology, all without tech heavyweights‘ help. Utilities and consumer staples went mostly sideways, disregarding the danger of yields about to rise again.

The rotation simply isn‘t much there, and the TINA trade isn‘t letting much air to come out of the S&P 500 sectors that would be expected to sell off in a more relaxed monetary policy. Treasury holders keep demanding higher rates, disregarding the soft patch in inflation expectations since mid-Mar. And they‘re right in doing so, for the PPI missed badly on Friday – the development I had been anticipating since mid-Feb.

Inflation in the pipeline is one of the reasons behind gold‘s resilience – and its continued rebound off the imperfect double bottom test.While the yellow metal‘s candlestick on Friday mirrors the USD/JPY one, the miners erased opening losses in a bullish show of outperformance. Given the continued consolidation in commodities keeping a partial lid on silver, that‘s bullish – gold appears sensing the upcoming pressure on the Fed to act once yields reach levels high enough to cause havoc across the markets, starting with stocks, just as I described on Mar 29. 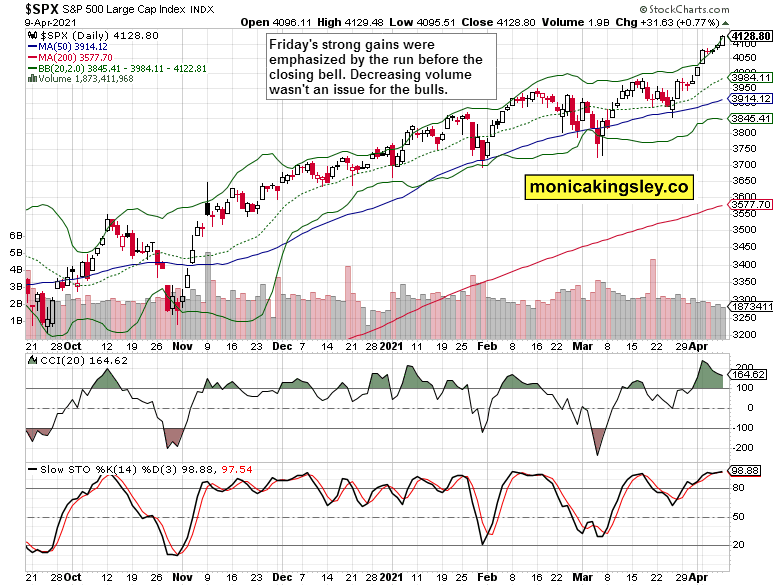 S&P 500 keeps pushing higher, into the upper border of Bollinger Bands that are now widening. Taking into account prior week‘s Easter-shortened trading, the weekly volume behind the upswing just in, is considerably lower than before – and that‘s not bullish. 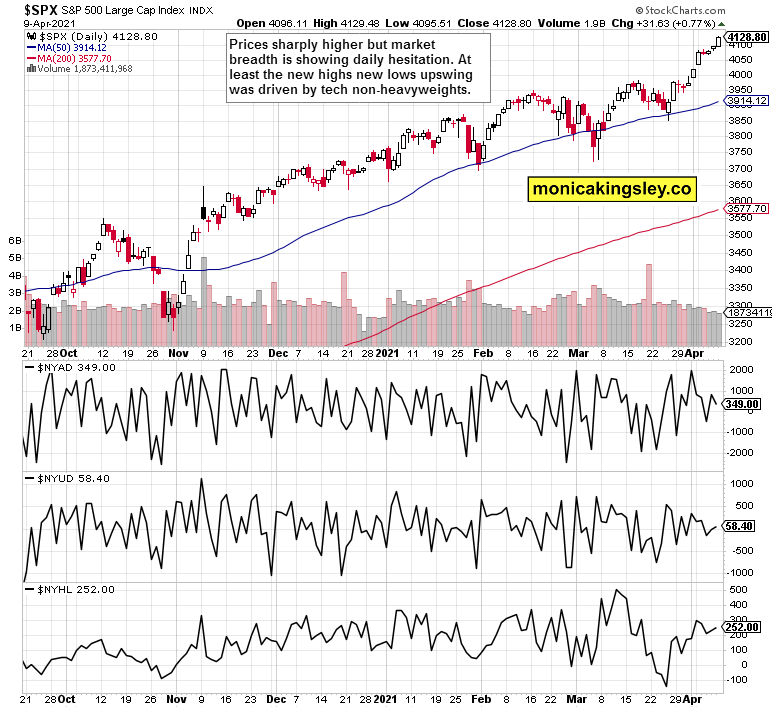 Market breadth indicators aren‘t arrayed in an overly bullish way. Both the advance-decline line and advance-decline volume have been lately unconvincing, but at least new highs new lows turned up. They‘re still below the early April peak, revealing that not as many stocks are pushing to make new highs. 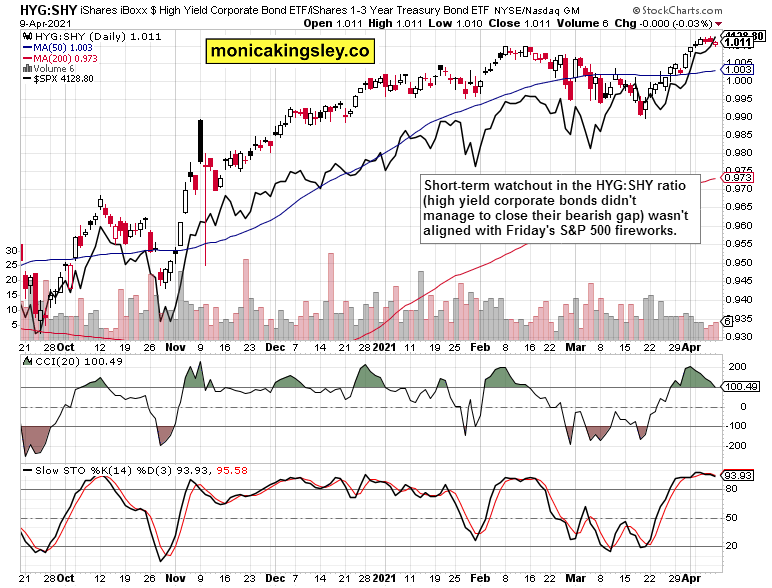 Very tight correlation between the high yield corporate bonds to short-dated Treasuries (HYG:SHY) ratio and the stock market ended on Friday, and it remains to be seen whether that was a one day occurence only. Investment grade corporate bonds (LQD ETF) gave up half of intraday gains as long-dated Treasuries declined – the downward pressure appears returning into the debt markets.

Tech (XLK ETF) turned from the sector most heavily extended to the south of its 50-day moving average, to the north of it. And given the hesitation a ka reversal in TLT reflecting upon $NYFANG, the sector‘s steep gains are likely to meet a headwind soon – and value stocks appear to be anticipating that with an upswing of their own, reflected in the financials (black line). 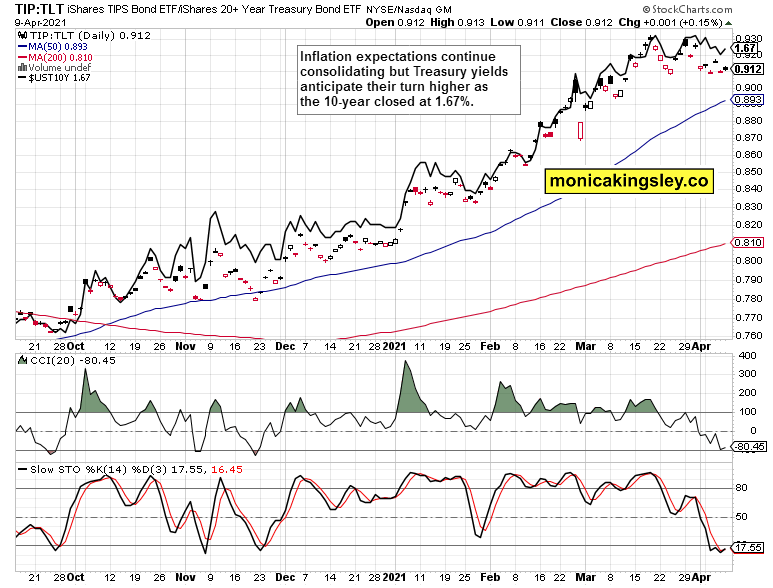 Inflation expectations as measured by the TIP:TLT ratio are basing, but bond yields refuse to budge, clearly agreeing that there is higher inflation coming. 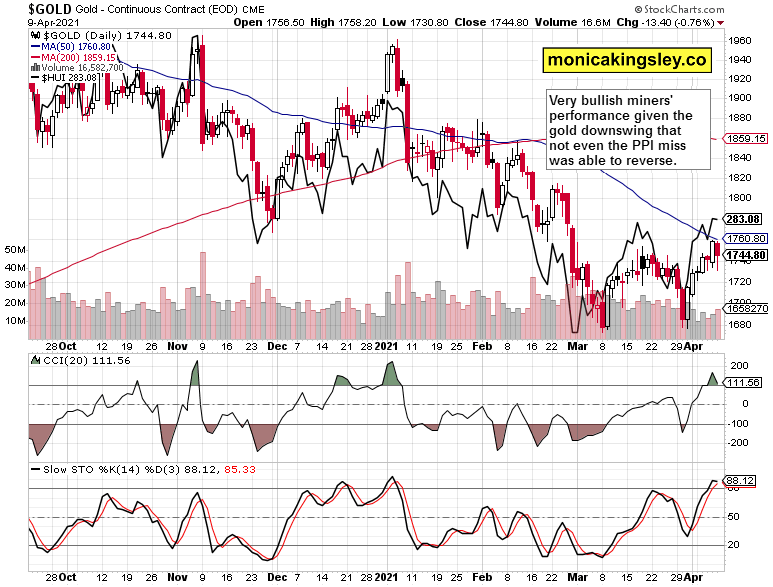 Gold miners are keeping the sector above water, and the daily gold downswing becomes much less credible as a result.

Silver and copper daily downswings are in line with the gold one – there is no indication of a pocket of underperformance in commodities or elsewhere about to spill over and exert pressure on the precious metals sector.

S&P 500 upswing is leaving the index in a vulnerable position, and especially the tech‘s reversal is leaving it in a perched place where no sector is however being really sold off. The current setup is still unfavorable for short-term oriented (bullish leaning) traders who prefer higher signal clarity to the tight correlation we‘ve seen this week, even more so given the corporate credit markets non-confirmation.

Miners did their job on Friday, and the precious metals upswing hasn‘t lost its spark in spite of both metals closing down. The $1,760s are still a tough nut to crack, but I look for these levels to be challenge in the near future.