S&P 500 again rejected within sight of ATHs – again, but not totally convincingly. Especially the credit markets‘ mixed picture leans in effect slightly bullish, yet for the 500-strong index, the source of short-term worry would likely be the tech sector again. Either not pulling ahead as strongly, or taking a breather, which should be more noticeable in XLK than in Nasdaq 100.

VIX looks to be done declining, and the option traders have hedged their Thursday‘s bets. Given the wavering risk-on segment of the credit markets, it‘s probably justifiably enough. Inflation expectations rose a little though, faster than the Treasury yields moved, which could be taken as a sign of value likely to do overall fine next – and that‘s also confirmed by smallcaps and emerging markets. As I wrote on Friday:

(…) Is that the worst of the inflation scare being over, for now? Probably yes, and the retreating Treasury yields are mollifying – but as explained in ample detail, this calm before the (autumn) storm, is deceptive. Calling the Fed‘s bluff, precious metals (and some commodities) are onto something, really.

It‘s only the cream of select commodities that has been taken off – in the big scheme of things, nothing but a consolidation within an existing secular bull market, is happening there. While the inflation trades have been dialed back to a degree, they haven‘t been broken as the Fed is in a reactive, not proactive mode. More precisely, it remains in denial of the inflation ahead.

In other words, I am not buying into the taper smoke and mirrors. The Fed knows that it can‘t (seriously) take away the support – it can only talk that, and look what the market does next. It‘s a long journey of preparation, and I am not looking for the central bank to move any time soon:

(…) soft patch, prolonged commodities consolidation yes, turn to deflation no. In such an environment, silver would have a tougher ride and be vulnerable to volatile swings defined by how the inflation, yields, expectations and Fed action bets play out.

Gold upswing remains well supported by the little lagging miners, and the broader view shows just how little breathing space the bears have. Not enough hot air has left commodities while nominal yields look as likely to retreat further. Silver is similarly bullish as it shows no signs of overheating.

Crude oil suffered a daily setback, not nearly enticing enough for the buyers – but the oil index doesn‘t favor more downside at the moment. The daily chart remains bullish, and the pressure to go higher is building up.

Bitcoin and Ethereum entered into the long weekend on a weak note, but the buyers stepped in. Having convincingly defended the rising support line, carved out a bullish divergence, and the initiative has moved to the bulls.

S&P 500 daily reversal that may or may not be threatening – and in my opinion, it isn‘t. Nasdaq 100 closed higher on the day, signifying that the risk-off shouldn‘t be overrated.

HIgh yield corporate bonds are in no mood to steeply decline, and attest to a risk-off whiff merely. As I am looking for TLT to turn up shortly, HYG wouldn‘t likely suffer too much.

Similarly, the tech downswing shouldn‘t be taken at face value – $NYFANG did fine but value did even better. More market breadth is though what the S&P 500 needs.

Gold rejected yet another downswing attempt, and so did the miners. The chart remains bullish, and the path of least resistance higher.

The copper to 10-year Treasury yield ratio remains on fire, amply supporting the precious metals sector – and as silver isn‘t taking the copper cue in full exactly, the appreciation potential is especially juicy.

The long weekend volatility was resolved at the rising black support line, and Ethereum trades now at $2,550 with Bitcoin changing hands for $36,100. The path taken to conquer the red resistance will be insightful, and the below ratio is tipping the scales in the bulls‘ favor. 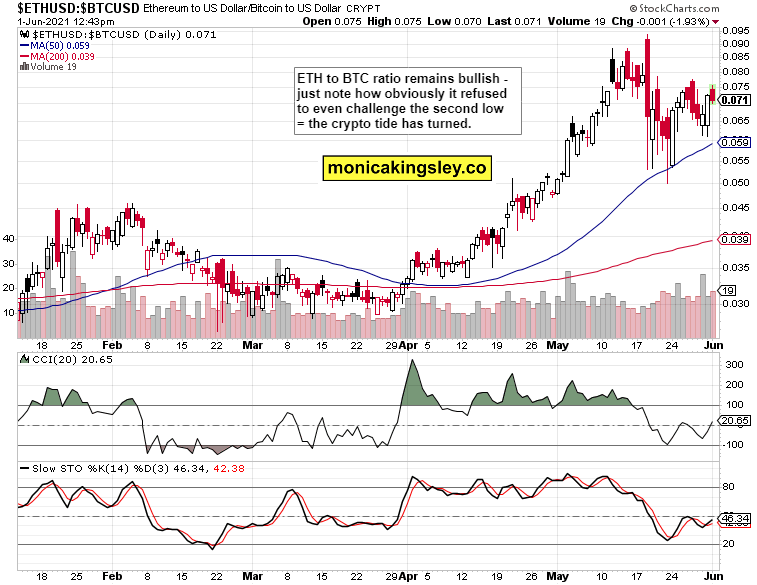 A lot of upside pressure building in the Ethereum to Bitcoin ratio, with the weekend attempt at the lows revealing the turning tide.

S&P 500 is upside bias remains unchanged in spite of Friday‘s woes. Any dip would likely be temporary.

Gold and silver remain primed to go higher, as much as the miners. The upleg is very far from over, and the only watchout is for the white metal not to get caught in the commodities consolidation trade.

Crude oil downswing came on cue, but the bulls might not have gotten a discount steep enough to join, solid oil index performance notwithstanding. At the same time, the largely sideways consolidation is taking a bit too long already.

Bitcoin and Ethereum have turned, but expect still volatile trading ahead, albeit with a bullish flavor.