There has been a severe jolt to investor confidence since the invasion of Ukraine, as sanctions have been slapped on Russia, and commodity prices roared upwards. The HL survey shows that confidence in all global sectors has plummeted, with confidence in Europe suffering the worst fall in March, plunging by more than a third as the devastating events have unfolded. Worries about the repercussions of higher oil and grain prices for global emerging markets are also likely to be behind the 26% fall in confidence for this sector. Confidence in the UK has dropped by more than a fifth (22%) as investors assess the ricochet effect sanctions will have on industries across the board, as they grapple with higher food and transport costs, and a hit to consumer spending power. Investor confidence in the UK has dropped back to levels not seen for 18 months at a time when the country was still reeling from pandemic restrictions, before vaccine breakthroughs dramatically lifted sentiment.

This week investors are once again assessing the potential economic damage that a fresh wave of Covid is causing in China. The Hang Seng in Hong Kong has dropped in dramatic fashion for the second session in a row, as tens of millions of citizens are locked down in the northern eastern province of Jilin, the first time an entire province has been quarantined since the start of the pandemic. The tech city of Shenzhen in the South also remains in lockdown, affecting more than 17 million people. Just as the world thought the worst of the pandemic was over, it seems it’s back to bite a chunk out of economic growth by causing fresh chaos for supply chains.  Major companies are suspending production, including Apple supplier FoxConn, and the car manufacturers Toyota and Volkswagen.

This double whammy of the ongoing conflict in Ukraine, with the fresh chaos caused by Covid in China is rattling nerves today with the FTSE 100 opening down by more than 1.5% in early trade. Mining giants Rio Tinto and Anglo American are once again feeling the repercussions of Chinese lockdowns, with worries about the hit to industrial production rising to the surface. Rio Tinto opened down around 4%, while Anglo American and Antofagasta dropped 3%.”

The investor confidence index is compiled by surveying clients on a monthly basis. Each month we send the investors’ confidence survey to 6,000 random clients and there is a representative split of our clients by age. On average around 10% of clients respond.

Confidence in global sectors has plunged by on average 22% in March: 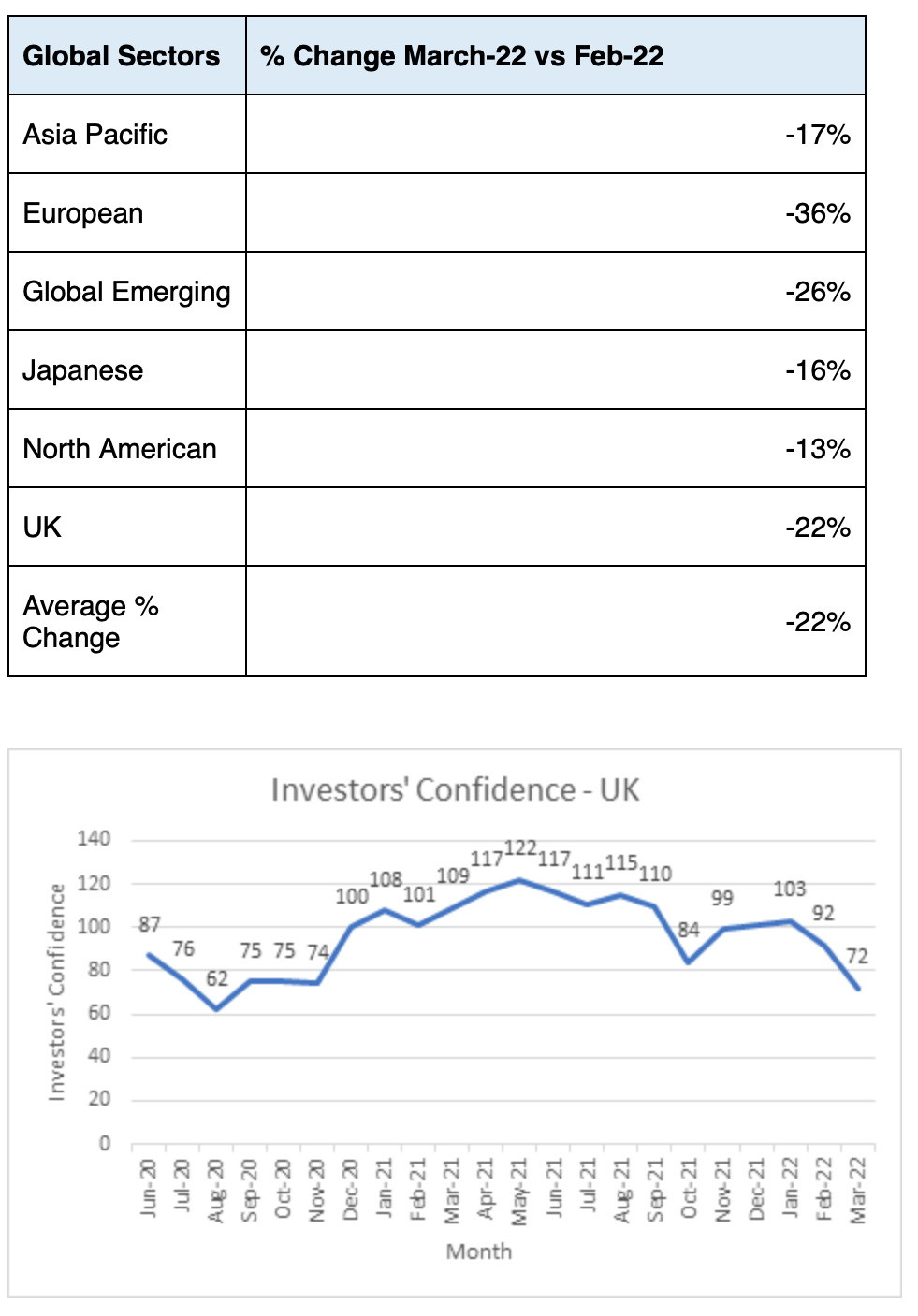