S&P 500 ended a losing streak thanks to the still fine retail sales data, and even consumer confidence edged up. In the flattening yield curve characterizing the move to a slow growth phase, it was (and will be) up to tech to outperform value. Also healthcare is likely to see brighter times ahead. If I were to pick two reasons for why I think stocks are bottoming here, it would be the risk-on turn in bonds accompanied by the 10-year yield soundly below 3.25%, and the capitulation in oil stocks (former star performer as these are likely to get pulled down among the last sectors while the key laggards such as tech are on the verge of starting to outperform) coupled with oil holding my $93 support.

Wednesday‘s very hot CPI print means that the pressure on the Fed to keep hiking aggressively, is on. Indeed no pause in inflation, and if PPI is anything to go by (it is) then there is a lot more in the pipeline – and I‘m not bringing up owners‘ equivalent rent, which would continue driving inflation ahead (it‘ll be now service driven as opposed to goods driven). With 50bp obviously not being enough to recoup some of the Fed‘s badly damaged credibility, the question is by how much they hike actually. There is chatter about a full 1%, but another 75bp one looks most probable to me. And should we see signs of inflation moderating (gasoline and heating oil topped in June, which would help the July figures, and with inflation expectations pointing lower now, odds are that we would then get 25bp in September, and that‘s it – midterms next, justifying Fed‘s wait and see posture.

[This is approximately where I do imagine the end of freely available introduction of extensive articles, which would then be enriched with select chart section(s). Today exceptionally and only, I‘ll be making the full introduction available so that you can see what kind of a key analysis the premium subscribers get.]

True, economic growth is slowing, and we are likely to get a slightly negative Q2 GDP reading, but given the way GDP is constructed (this setback would be driven by inventories and trade balance), I don‘t see NBER as likely to declare the U.S. to be in a recession. Europe, that‘s another story entirely – in the worst case that the Fed doesn‘t succeed in its soft landing, we‘re looking at an early 2023 U.S. recession – regardless of the housing turmoil gathering steam, the States are largely insulated from the darkening clouds worldwide. I‘m looking for a quite good Q4 of S&P 500 gains, but at the same time, remember that the current bottoming is a process, and I view the approaching washout (give it 2 weeks to start roughly) as the likeliest scenario still. So, enjoy the positive seasonality of a few good weeks of July still ahead.

Precious metals don‘t like the strong dollar and tightening prospects ahead, and Powell essentially saying that if having to go into recession is the price of breaking inflation (breaking as in realisitcally driving it to 4-5% annualized), then so be it, doesn‘t help either. The Fed would be certainly in a more difficult position than it‘s in currently if the job market got weaker – having looked at the deceptively allegedly strong non-farm payrolls, something doesn‘t add up with the low figure of hours worked really. In short, this isn‘t yet time for any metals – on the Fed pause in hiking with September being the last one, brighter days are ahead to start the autumn in both precious metals and copper. Makes sense for the Fed to get tougher now, because getting tougher later would be much harder to execute.

Crude oil has likely turned up from $93, but the upcoming upswing would be a labored one. For all the reasons given in today‘s rich chart commentaries, I‘m looking for the next upswing in commodities to be energy-driven. Finally cryptos are likely to modestly participate in the risk-on turn developing (it would positively affect both paper and real assets), before the bears reappear relatively shortly (again around 2 weeks, perhaps a bit less) again.

Let‘s move right into the charts (all courtesy of Stockcharts.com). 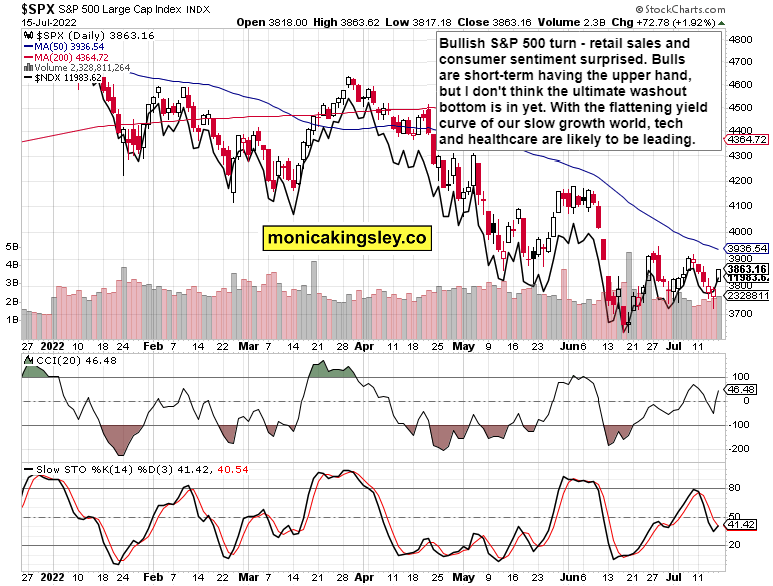 S&P 500 is powered to go higher next, and I‘m looking for 4,000 to be reached again. While tech isn‘t yet clearly outperforming, this is going to change – especially later in the second half of 2022.

HYG upswing is likewise only starting – the bond reprieve is very welcome, and it would be a fresh downleg in bonds (with 10-year yield breaking 3.25%) that would make me concerned as regards the prospects of a good finish to 2022 throughout positive Q4.

Precious metals aren‘t yet bottoming, the momentum has picked up since I last talked the sector, miners are down, and the miners to gold ratio hasn‘t yet turned. As the hawkish Fed turns neutral, a fresh upleg awaits. For now, leaner weeks are still ahead – the pain isn‘t over yet. 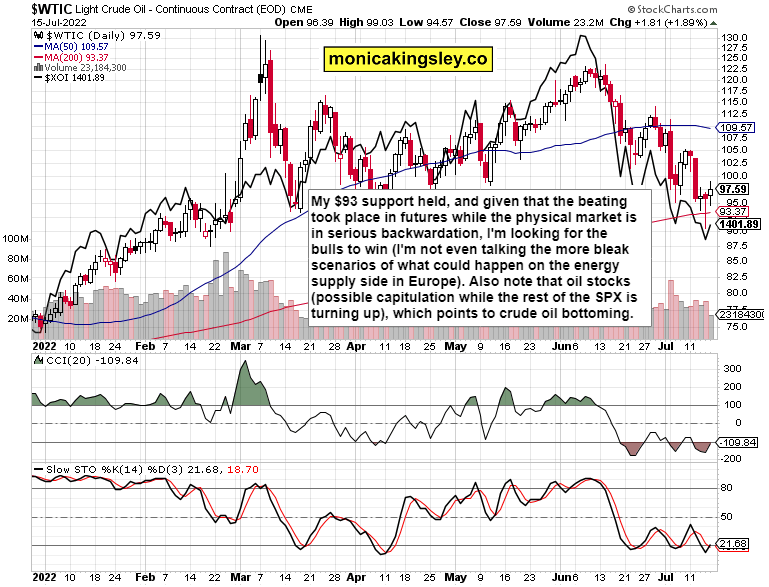 Crude oil is turning the corner, and I‘m most optimistic about this part of the commodity sector. When the SPR (strategic petroleum reserve) stops being dumped into the market, prices would return to the uptrend with more ease. Not looking yet for a sharp appreciation, for that (similarly to other real assets), the dollar has to top first – we‘re getting near, and I‘m looking for September to be that time of greenback rolling over. 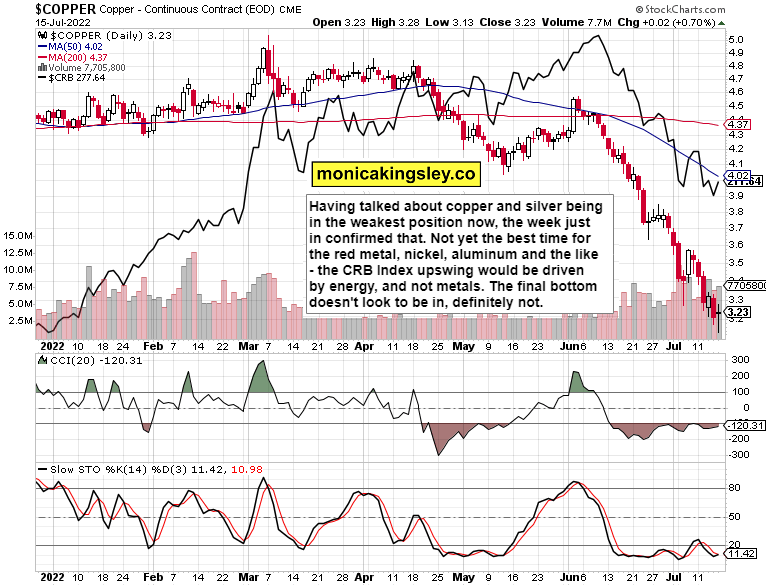 Copper lived up to my expectations of being the weakest of the weak – still. The reversal isn‘t yet on the table, reflecting the troubled real economy outlook just ahead. Not yet the time to buy even though we‘re likely to drift slowly upwards from here, in tandem with stocks. 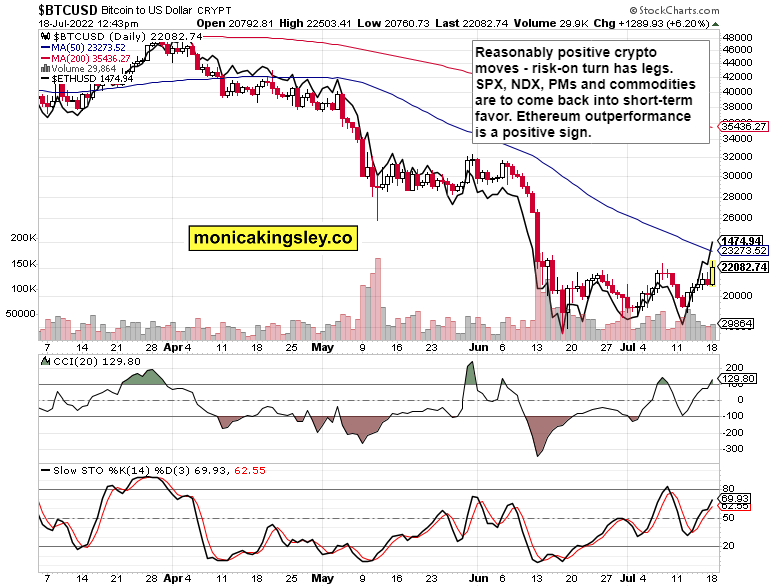 Cryptos are turning up, and that provides a confirmation of the developing risk-on turn, with positive implications beyond Nasdaq and bond prices.