S&P 500 hard at work erasing that early bear raid, but the bulls managed to stage a comeback. Yet, the risk off atmosphere is palpable in bonds, rallying as if no inflation were on the horizon. Or as if no taper was coming.

(…) The dollar doesn‘t look to be turning around – Thursday‘s upswing has been erased, but look for the greenback to reflexively rise when confronted with „taper now“ prospects. But is the Fed ready to welcome higher rates, and work towards them? I look for plenty of assurances that the support would be very gradually withdrawn so as not to affect the markets…Toothless compromises for public consumption fit into the picture greatly too...

Look, the $6T boondoggle is dead on arrival, and won‘t turn out nearly so in the end and fast enough, which would take a little pressure off the still hot inflation trades. Commodities, followed by silver, and finally gold would feel (by extent of reaction) the short-term pinch, but remember that inflation fires on two engines - and the job market one is arriving:

(…) Commodities exerting cost-push influence, and job market pressures, would be a one-two punch to the transitory inflation arguments. Deflationary shock simply isn‘t likely at the moment – the market will more probably find out the Fed isn‘t as serious about taper as it pretends to be – the ostrich pose. Or we might be cushioned into a higher inflation environment actually (thank you, Janet), being told it‘s for our own good.

Gold is more vulnerable than silver to a scared dump, and the miners weakness shows it won‘t be smooth sailing for the yellow metal either. Copper consolidation doesn‘t add to the certainty, but the red metal‘s bullish bias is clearly there, both in the short run and medium-term as I had been stating months ago that you can‘t (attempt to) build a green economy without copper, silver, or nickel, among much else. It‘s massive and we‘re in a commodities superbull already – and the lumber arguments (not confirmed by timber weakness as I remarked) can be easily refuted by the $CRB index performance.

Crude oil daily consolidation didn‘t reach far, again – and the oil index still doesn‘t support deeper downside that could be bought. Yes, the days of higher oil are still coming, for black gold prices can‘t wreck the real economy just yet. Last but not least, the U.S. is no longer a swing producer (wildcard for prices) as the rig count shows.

Bitcoin is showing rare daily strength, testing the late May lows while both Ethereum and Cardano are way weaker. The Bitcoin upswing is thus likely to run out of steam. 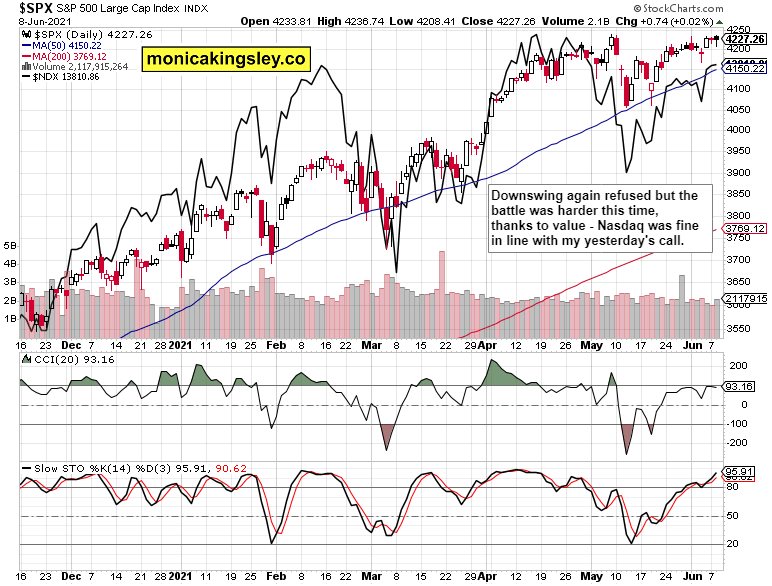 S&P 500 again defended gained ground, and Nasdaq 100 again rose a little – the 500-strong index rally is still likely to be driven by the tech sector in the very short term.

High yield corporate bonds‘black candle looks ominously – but only for the short term. Quality debt instruments rising is a sign of rush to safety and uncertainty ahead of tomorrow‘s CPI. It‘s though still a bullish sign that HYG rose.

Technology including $NYFANG had a relatively good day, but the black candle is a sign of unease in stocks, underlined by value.

Gold held up quite well once again, but the miners repeated non-confirmation is a loud warning, in spite of the nominal yields retreat. Rebalancing in safety trades ahead.

Silver isn‘t flashing warning signs of outperformance in any way, and it‘s the copper chart indecision that‘s soundly affecting the red metal‘s ratio to the 10-year Treasury yield. So far so good. 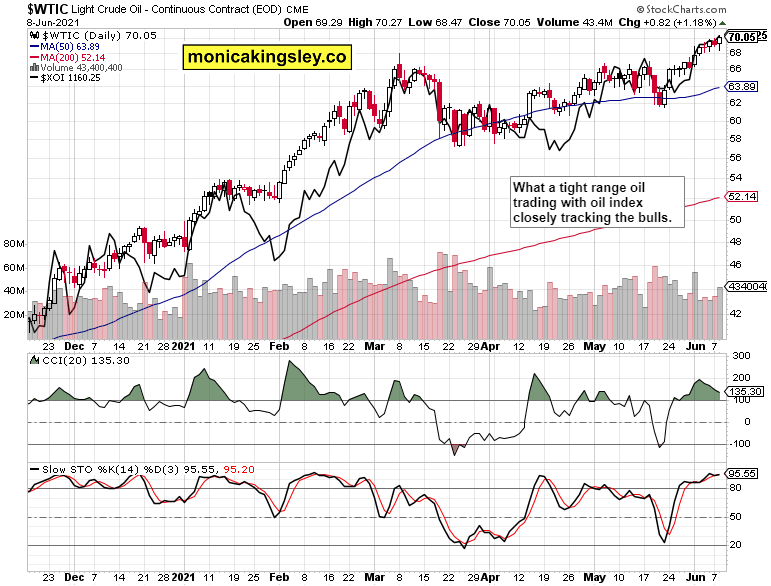 Crude oil bulls had to defend against meek premarket selling yesterday, and the volume still supports them.

S&P 500 tremors will likely be resolved to the upside when the CPI and other dust settles, and I am not looking for a Nasdaq disappointment either.

Gold and silver are likely to repel the onslaught miners‘ weakness is signalling, with the white metal getting under pressure more than the yellow one – at a time when GDX and HUI would attempt to throw off the PMs bulls.

Crude oil chart remains bullish, and dips are likely to be bought. Getting stretched but no real breather on the horizon just yet (apart from CPI).

Bitcoin upswing better be viewed with a healthy dose of suspicion while Ethereum keeps sideways consolidating.

Related: The Guessing Game on the Fed's Taper Goes On