No Upsetting the Apple Cart in Stocks or Gold

The tax hike proposal shock is over, and S&P 500 took again on the ATHs on Friday. Buying pressure throughout the day lasted almost till the closing bell, and is likely to continue this week as well. And why shouldn‘t it – has anything changed? The artificial selling any capital gains tax hike would generate, is likely to come before year end – not now:

(…) Look still though how little has changed, as if the tax raising plans haven‘t been around since the infrastructure bill or implicitly even before. It‘s still April, and markets are pricing in not only this select reality, but broader tax increases coming. Yes, they have woken up, and the reflation paradigm is getting an unwelcome companion. This hit won‘t bring down the bull, but will slow it down – and the implications for broader economy will only hasten the pronounced advent of the commodities supercycle (well underway since the corona deflationary crash last year).

The move towards risk-on was clearly there, overpowering the USD  bulls yet again as the dollar bear market has reasserted itself. It‘s not just about EUR/USD on the way to its late Feb highs, but about the USD/JPY too – the yen carry trade is facing headwinds these days, acting as a supportive factor for gold prices. While these went through a daily correction, commodities pretty much didn‘t – lumber is powering to new highs, agrifoods didn‘t have a down day in April, copper and oil scored respectable gains. The market is in a higher inflation environment already, and it will become increasingly apparent that commodity-led inflation is here to stay.

Back to stocks and bonds, the S&P 500 took well to a daily rise in Treasury yields – and that‘s the key factor overall. The turnaround was most clearly seen in tech heavyweights but defensive sectors such as consumer staples or utilities didn‘t do well (they‘re interest rate sensitive, after all), and Dow Jones Industrial Average traded closer to the optimistic side of the spectrum. The second piece of the puzzle came from value stocks and financials, which are working to put an end to their own shallow correction – just as you would expect when rates take a turn higher.

So, another volatility spike has been banished, but option traders aren‘t yet satisfied, and keep piling into protective instruments. I view this as a fuel of the upcoming rally continuation, unless the tech‘s earnings batch doesn‘t disappoint as Netflix subscriber base growth did.

One more argument in favor of the S&P 500 upswing, comes from the smallcaps – the time of their outperformance, is approaching. Likewise emerging markets are starting to do better, and the dollar effect is part of the explanation.

Gold took sensitively to the rise in yields, and retreating dollar didn‘t lift it up really. The yellow metal disregarded proportional increase in inflation expectations, and so did the miners – indicating that a brief soft patch in the precious metals sector can‘t be excluded. This doesn‘t change my Friday‘s thoughts that:

(…) The precious metals upleg has started, we‘re in a real assets super bull market, and this little hiccup won‘t derail it. The sad implication would actually drive it as capital formation would be hampered, unproductive behaviors encouraged, and potential output lowered.

Pretty serious consequences – add to which inflation as that‘s what the Fed ultimately wants, and the recipe for more people falling into higher tax brackets through illusory gains, is set. Then, as inflation starts firing on all cylinders – a 2022-3 story when the job market starts overheating – the pain would be felt more keenly. 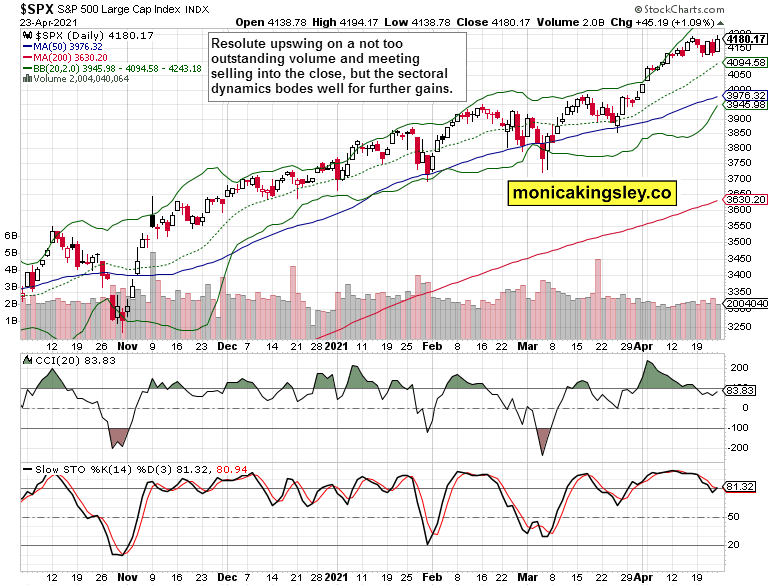 It‘s not an issue that the two latest upswings happened on decreasing volume as I view the preceding modest volume spike as a sign of weak selling turning into accumulation. There is plenty of doubt to drive further S&P 500 gains.

Both high yield corporate bonds to short-term Treasuries (HYG ETF) and investment grade ones (LQD ETF) have risen on Friday, and the divergence to long-dated Treasuries is another key factor driving the risk-on return conclusion.

The $NYFANG strength was the key deciding factor in the S&P 500 upswing, and value stocks didn‘t stand in the way much either. Financials joined in the upswing by tech are a sign of the shallow correction drawing to its end. 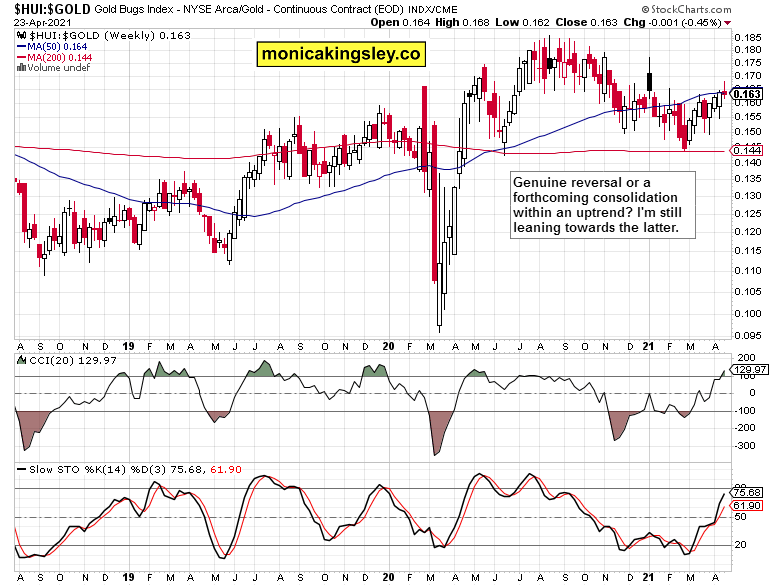 Compare this chart to the one that I published on Thursday – the red candle smacking of reversal is actually just an initial rejection in my view. It‘ll take a while to return back above the 50-day moving average, but that‘s a question of time merely. 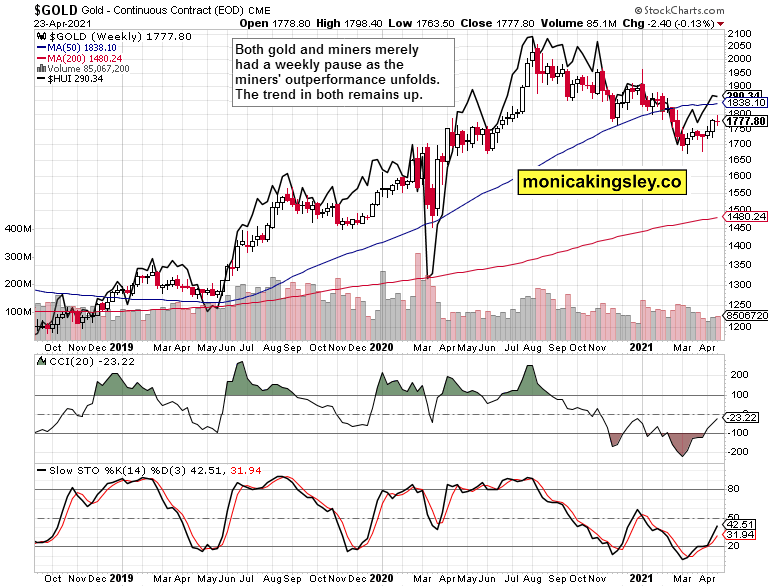 Gold miners are still outperforming, and the upside momentum in the gold sector merely paused. We may see a brief pullback as the bears try their luck, but it will be only a temporary setback – there is no telling weakness in any of the markets I am looking at that would indicate otherwise.

The copper to 10-year Treasury yield ratio shows that the markets aren‘t buying the transitory inflation story – the rush into commodities goes on, and justifiably so. Just look how much silver has been resilient, and the white metal is uniquely positioned to benefit both from the economic recovery, forced shift into green economy, and building monetary pressures. 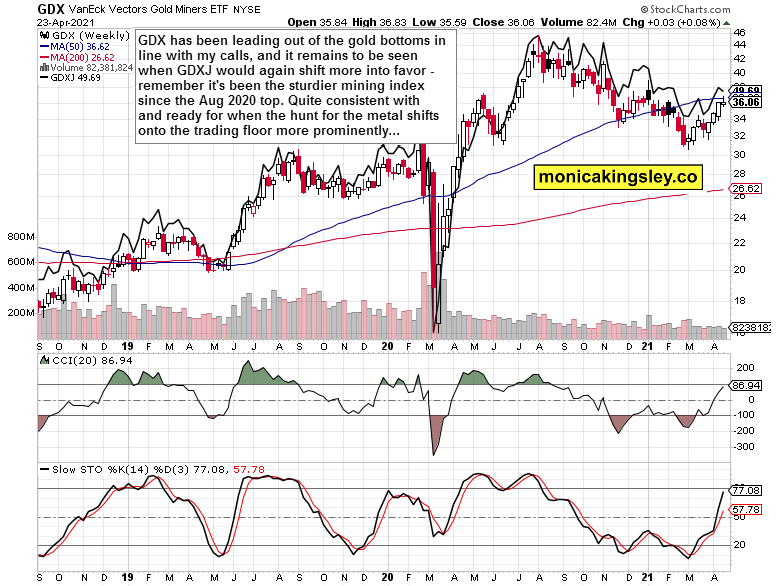 Throughout the 10+month long correction, juniors had been the more resilient ones, but it was the seniors that I called to lead gold out of the bottom. And they did, meaning that juniors had underperformed over the coming month clearly. Once animal spirits return even more to the precious metals sector, their outperformance is likely to return as the market appetite for ounces in the ground grows. We aren‘t there yet, but the new upleg is well underway.

The S&P 500 turned around convincingly, and new highs are a question of a rather short amount of time – be prepared though for headline risks should we get an (unlikely) earnings disappointment.

Gold and miners are in consolidation mode as they failed to take advantage of plunging dollar and rising commodity prices, but the precious metals sector is likely to play a catch up relative to commodities as its sluggish post Aug performance would get inevitably forgotten.

Related: The Tax Plan to Slay the Stock Bull?