The Dow Jones and S&P 500 fell on Monday (Dec 7), while the NASDAQ booked another record close.

In the short-term, there will be optimistic days where investors rotate into cyclicals and value stocks, and pessimistic days such as Monday where investors rotate into tech and “stay-at-home” names. On other days, like last Friday, the markets will broadly rise without any one specific catalyst. With this much uncertainty comes market unpredictability.

In the mid-term and long-term, there is certainly a light at the end of the tunnel. Once this pandemic is finally brought under control and vaccines are mass deployed, volatility will stabilize, and optimism and relief will permeate the markets. Stocks especially dependent on a rapid recovery and reopening such as small-caps should thrive.

According to Ed Yardeni, president and chief investment strategist at Yardeni Research, “Renewed lockdown restrictions in response to the third wave of the pandemic are likely to weigh on the economy in coming months, but we don’t expect a double-dip…(but) the economy could be booming next spring if enough of us are inoculated against the virus.”

For at least the rest of 2020, markets will wrestle with the negative reality on the ground and optimism for an economic rebound in 2021. Amidst the current fears of a stall in economic recovery with further COVID-19-related shutdowns and no stimulus, it is very possible that short-term downside persists. However, if a stimulus deal passes before the end of the year, it could mean more market gains.

Due to this tug of war between good news and bad news, any subsequent move downwards will likely be modest in comparison to the gains since the bottom in March and the gains since the start of November. It is truly hard to say with conviction that another crash or bear market will come. If anything, the mixed sentiment will keep markets relatively sideways.

Tech’s Volume Has Declined and Valuations Have Heated...But the Rally May Not Be Over 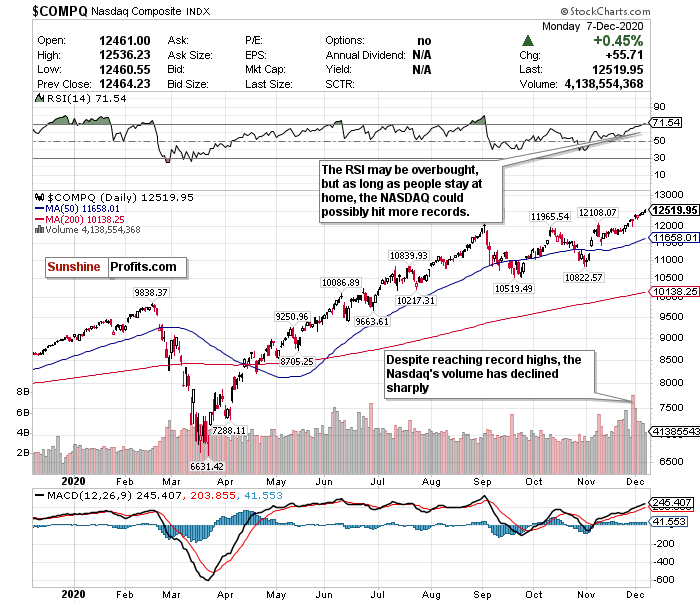 Despite initially lagging behind cyclicals and value stocks during the vaccine rallies of early November, the NASDAQ has outperformed both the Dow and S&P for two consecutive weeks. The trend continued to start this week.

As long as people continue to stay-at-home and the pandemic rages, the “new normal” economy dictated by tech companies will continue. On pessimistic days, the market will react this way too with the NASDAQ outperforming the other indices.

However, according to the chart, there are some serious concerns of the index being overbought and the rally being sustainable. Tech valuations have now reached astoundingly inflated levels, and there are questions if it can go on this way.

Despite gaining 2.2% last week and reaching yet another record high on Monday, the NASDAQ’s volume has continued to decline. With valuations this high, it is quite concerning. Low volume, especially a sharp drop in volume like the NASDAQ has seen, means that there are fewer shares trading. Lower volume also means less liquidity across the index, and an increase in stock price volatility. Therefore, the NASDAQ’s trending volume adds another layer of concern on top of already overinflated valuations.

Additionally, the RSI remains above the overbought 70 level. While an RSI in excess of 70 doesn’t automatically mean a trend reversal, it is something to be concerned about.

On pessimistic days, having NASDAQ exposure is certainly a good thing because of all the “stay-at-home” stocks that trade on the index. However, positive vaccine news always induces the risk of downward pressure on tech names- both on and off the NASDAQ.

It is very hard to say with conviction to sell your tech shares. However, all of the signs are pointing to an eventual sell-off and correction sooner rather than later. If anything, just tread lightly. For now, the NASDAQ gets a HOLD call. But if it keeps surging and hitting more record highs with a declining volume and an RSI as high as this, it will simply not be sustainable.