Markets Rising from the Ashes

S&P 500 caught a partial bid yesterday, enough to stave off the break of prior Wednesday‘s lows. All isn‘t fine under the surface though as yet another Fed trial baloon emerges – this time, talking about talking taper, doing predictable wonders for the dollar. As I have stated, it‘s when the Fed would really move that the greenback would go up again. The important word here is „really“ - this doesn‘t qualify yet, but the noises can‘t be ignored.

That‘s taking me to the partial bid mention as it shows in the S&P 500 sectoral action – tech rises and value continues trembling. The Russell 2000 keeps lagging while emerging markets seem to still doubt the Fed‘s seriousness. But the VIX daily move is positive as the daily spike has been clearly rejected – another, this time a smaller and pickier algo repositioning at work. At the same time, option players got positioned for another shoe to drop, tying in well with their moves overall since late Feb.

(...) when the central bank‘s manual consists mostly of transitory inflation talking points and tolerance to upside overshoots. The market is thinking otherwise, and the speed with which stocks seem to be discounting the P&L impact of cost-push inflation, sends a warning as clear as the dissipating PPI effects. Just wait for when the job market pressures add in. In my view, the market is worrying that the Fed is losing / has lost the inflation battle.

At the same time, the Fed is prepping / making noises it‘s prepping for the inflation specter. As said, inflation is the tool to eventually sink stocks, and the fear is hitting value and tech alike. Yet similarly to Nasdaq upswing yesterday, corporate credit markets are sending a glimmer of hope that the return to risk-on is approaching, and could lift the challenged value stocks, which typically don‘t take well to retreating yields lately. At the same time, we‘re still in the phase of their outperformance of tech, which is in line with the reflation and reopening themes. The discrepancies in sectoral performance of late are the explanation behind the S&P 500 pendulum swinging bullish delayed again.

Gold caught a safe haven bid but the miners hesitated to a degree. Silver sold off in sympathy with most commodities, but not much has changed overall in the precious metals upswing anatomy. Yes, the upcoming soft patch I first mentioned on Monday, isn‘t over yet – but the miners to gold ratio says this is just white noise aka pullback within an uptrend. Metals bulls needn‘t worry, and could time it the way I did – to take off the table sizable open profits in the maxed out position sizing limits of mine that had been accumulating since the march to imperfect second bottom in late Mar.

Keep in mind the big picture:

(…) as I stated a month ago, the unavoidable inflation data bringing down real rates, are forming a bid below the metals, mainly below gold. What started as a decoupling from rising nominal yields that I talked in early Mar, will continue in a more obvious way, the more the markets would worry about Fed‘s perceived control over inflation.

By the same token, the more the Fed moves to control nominal rates, the more under pressure real rates would get. Patience still though as I am looking for the 10-year yield to trend modestly lower over the coming weeks, and for return of rising yields in early autumn. For now, metals keep looking forward, discounting…

Crude oil isn‘t happy about the Iranian deal, and keeps searching for a bottom. It would however come back once the risk appetite returns. For now, let‘s see where the bulls would step in – the oil sector ($XOI) still favors that to happen relatively soon.

Bitcoin and Ethereum are recovering from yesterday plunge, and more than a few bulls are dipping their toes in. The worst certainly appears to be over, and the very profitable Bitcoin short (closed yesterday) resulted in smashing gains. 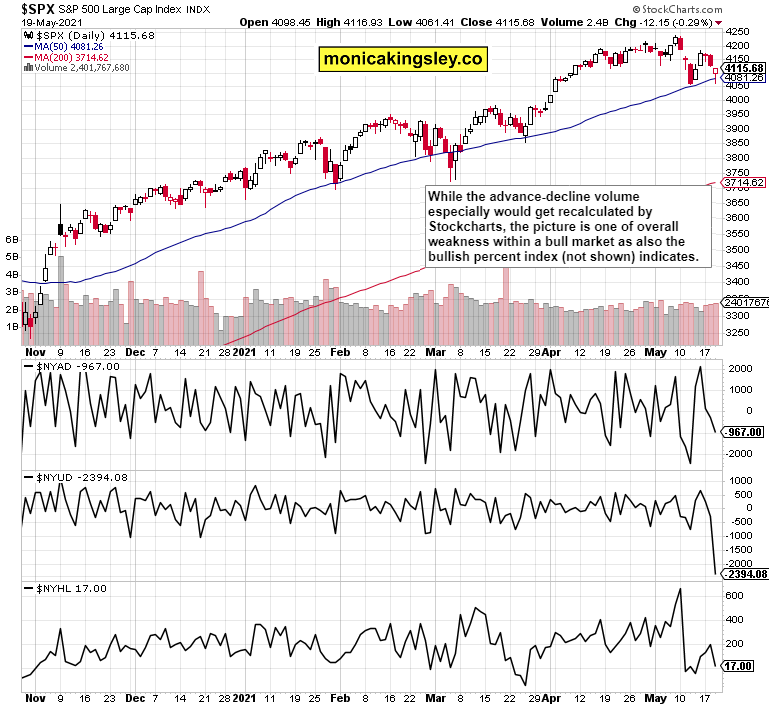 The S&P 500 is far out of the woods just yet – the market breadth attests to weakening leadership. While the bullish percent index remains okay for now, new highs new lows better start recovering alongside value.

Corporate bonds – whether high yield or investment grade ones – show an early sign of S&P 500 support, the junk ones especially.

Tech rose without much help from $NYFANG, but it‘s value that needs to be watched closely. Fed-driven change in gears wouldn‘t serve the sector well.

Gold bulls better get ready to defend gained ground as a move lower appears increasingly likely, not only the miners say.

The copper to 10-year Treasury yield ratio spells short-term caution for both gold and silver. 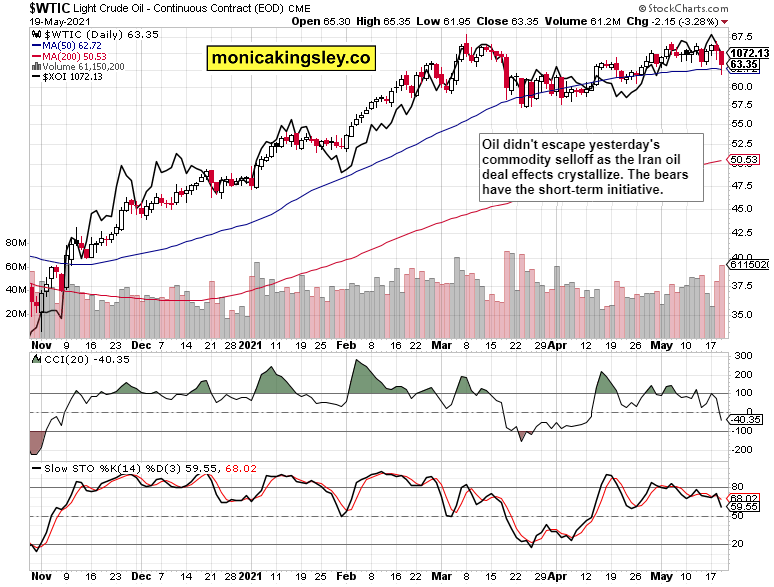 Crude oil is about to form a local low quite soon, and the starting signs of accumulation are there.

S&P 500 bulls have the initiative and budding credit market support. How well they defend the gains, needs to be watched closely next.

Gold and miners still indicate we haven‘t left the soft patch as silver waits for more support from the commodities space.

Crude oil is stabilizing and the oil index supports higher prices, but the local bottom isn‘t yet formed.

Bitcoin and Ethereum recovery goes on, making it worthwhile to eye an opportune entry point after the washout.