Markets Recover Some Losses, All Eyes on Georgia

Stocks gained on Tuesday (Jan. 5) after the major indices all sold off to start the year on Monday (Jan. 4).

After stocks sharply dropped on Monday (Jan. 4) to kick off 2021, widespread gains on Tuesday (Jan. 5) offset some of these losses. While Monday (Jan. 4) was the first time since 2016 that the Dow Jones started a year off with declines, two major catalysts sent the major averages higher: the oil production agreement reached between OPEC and Russia, and better than expected manufacturing results from December.

This tug of war between good news and bad news can be expected in the early part of this new year. Although Monday (Jan. 4) witnessed a sharp pullback (and in my opinion, a predictable one), Tuesday (Jan. 5) witnessed a reversal. In general, though, I still believe that markets have overheated and that between now and the end of Q1 2020, a correction could likely happen.

Markets have overheated, and I believe that much of the good news ranging from economic stimulus to vaccines has been baked in. Eventually, the reality on the ground will outweigh the positive news in the short-term.

National Securities’ chief market strategist Art Hogan put it best in my opinion, saying that he believes we could see a 5%-8% pullback as early as this month. Hogan said that

“we have a tug of war between virus news and vaccine news the better part of six months, and that’s been balanced off by stimulus...That seems to be behind us, and right now I think the virus news takes over a little bit.”

Additionally, if the Georgia elections on Tuesday (Jan. 5) go as I think they’ll go (Democrat sweep), it could be a short-term catalyst leading to a potential correction. The balance of power in the U.S. Senate is at stake with these elections. Investors are likely to prefer a divided Senate. If the Democrats sweep and wrestle away Senate control from the Republicans, it could leave President Biden’s powers largely unchecked, and enable him to pass more ambitious, progressive, and less market-friendly policies.

At the time of this publication, Democrat candidate Raphael Warnock was declared the winner over the incumbent Republican Kelly Loeffler for the first Senate seat up for grabs. The other contested seat between Democrat Jon Ossoff and incumbent Republican David Perdue had yet to be called.

According to John Stoltzfus , chief investment strategist at Oppenheimer Asset Management , the S&P 500 could fall by 10% if the Democratic candidates sweep the Georgia runoffs.

“It is thought by not just a few folks on Main Street as well as on Wall Street that if tomorrow’s run-off results in a sweep for the Democrats — providing them with control of the Senate as well as the House — that it would bode ill for business with the likelihood that corporate tax rates could rise substantially,” Stoltzfus said.

On the other hand, a Democrat sweep could mean potentially larger stimulus packages - and soon.

There is optimistic potential, but the road towards normality will hit inevitable speed bumps and uncertainty. This Senate election and the potential market reactions reflect that.

If and when a correction does happen, I believe it will be healthy and a good thing. Corrections are normal market behaviors and happen more frequently than most realize. Only twice in the last 38 years have we had years WITHOUT a correction (1995 and 2017). Since we have not had one since March 2020, I believe we are long overdue, and the catalysts are there. Most importantly though, a correction could be a great buying opportunity for what I believe will be a strong second half of the year.

While there will certainly be short-term bumps in the road, I love the outlook in the mid-term and long-term once vaccines become more widely available. The pandemic is awful right now, and these new infectious strains are quite concerning. But despite this, I believe the positive manufacturing data released on Tuesday (Jan. 5) is a step in the right direction, especially considering all the restrictions that most countries are living through.

The consensus is that 2021 could be a strong year for stocks. According to a CNBC survey which polled more than 100 chief investment officers and portfolio managers, two-thirds of respondents said the Dow Jones will most likely finish 2021 at 35,000, while five percent also said that the index could climb to 40,000.

The premium analysis this morning will showcase a “Drivers and Divers” section that will break down some sectors that are in and out of favor. As a token of my appreciation for your patronage, I decided to give you a free sample of a “driver” and “diver” sector. Please do me a favor and let me know what you think of this segment! I’m always happy to hear from you. 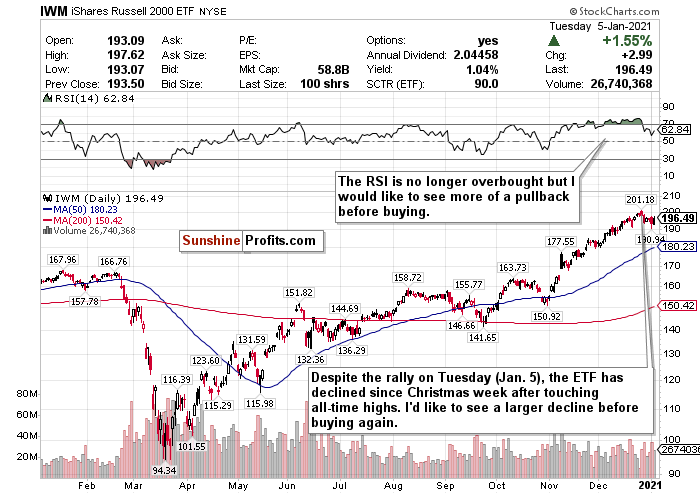 After seeing a sharp pullback since Christmas week, the Russell 2000 briefly returned to its winning ways on Tuesday (Jan. 5). The IWM Russell 2000 ETF which tracks the small-cap index witnessed a 1.55% gain - its best day in a while.

Although I genuinely love small-cap stocks in the long-term as the world will eventually reopen, I believe that in the short-term the index has overheated. Until the start of this week, the RSI for the IWM Russell 2000 ETF was at an astronomical 74.54. Although the RSI is at a more manageable 62.84, I still believe that the party of seeing vertical gains is over for now.

Small-caps in the short-term will be more sensitive to bad news, and right now there is a lot. Vaccine gains have possibly been baked in by now and stocks just don’t go up vertically the way that the Russell 2000 did between November and late December. It is very possible that small-caps in the near-term could trade sideways before an eventual larger pullback. I truthfully hope small-caps decline a minimum of 10% before jumping back in for long-term buying opportunities.

For now, SELL and take short-term profits if you can - but do not fully exit positions .

If there is a pullback, this is a STRONG BUY for the long-term recovery. 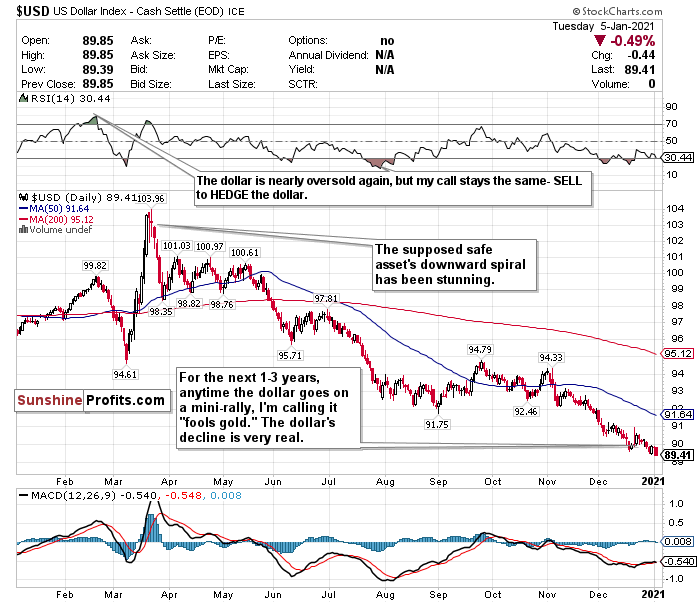 I have zero faith in the U.S. Dollar as a safe asset, even if we may see some short-term volatility and “risk-off” trades. I still am calling out the dollar’s weakness after several weeks despite its low levels. I expect the decline to continue as well thanks to a dovish Fed.

Any time the U.S. Dollar rallies, it is simply “fool’s gold.” Since I started doing these newsletters about a month ago, I have consistently said that any minor rally the dollar would experience would be a mirage. Since the dollar briefly pierced the 91-level on December 9th, it has fallen over 1.8%. Despite the dollar experiencing another mini-rally and nearly piercing the 91-level again on December 22, I remained steadfast in my bearish outlook of the dollar. Since the open on December 23rd, the U.S. Dollar has declined another 1.25%. I believed the dollar would drop back below 90 before the new year, and here we are to start off 2021 with the dollar at 89.41. Since hitting a nearly 3-year high on March 20th, the dollar has plunged nearly 13.8% while emerging markets, foreign currencies, precious metals, and cryptocurrencies continue to strengthen. Gold for example reached an 8-week high on Tuesday (Jan. 5)

On days when COVID-19 fears outweigh any other positive sentiments, dollar exposure might be good to have since it is a safe haven. But in my view, you can do a whole lot better than the U.S. dollar for safety.

I have too many doubts on the effect of interest rates this low for this long, government stimulus, strengthening of emerging markets, and inflation to be remotely bullish on the dollar’s prospects over the next 1-3 years. Meanwhile, the US has $27 trillion of debt, and it’s not going down anytime soon.

Another headwind to consider for the dollar is the Georgia Senate election. If Democrats sweep, there could be more aggressive stimulus in the near term. With Democrats controlling both the House and the Senate, more stimulus could be bearish for the dollar.

Additionally, according to The Sevens Report , if the dollar falls below 89.13, this could potentially raise the prospect of a further 10.5% decline to the next support level of 79.78 reached in April 2014. With the dollar now at 89.41, we are coming dangerously close.

The dollar’s RSI is also nearly oversold once again and is trading significantly below both its 50-day and 200-day moving averages.

For now, where possible, HEDGE OR SELL USD exposure.