Is the Market Downturn Overblown and Already Over?

The theme of last week was primarily the same as the previous few weeks- rising bond yields and inflation fears caused stocks to crumble.

Look, it's not the fact that bond yields are rising that are freaking out investors. Bond yields are still at a historically low level, and the Fed Funds Rate remains 0%. But it's the speed at which they've risen that are terrifying people. So far this year, the 10-year yield has soared 72%

Fed Chair Jay Powell's statement that inflation could "temporarily return" did not help matters much last week either. However, despite the fears, the indices really did not perform all that badly the previous week after a Friday (Mar. 5) reversal. The Dow Jones managed to gain 1.8%, the S&P eked out a 0.8% gain, and after briefly touching correction territory and giving up its gains for the year, the Nasdaq managed to decline only -2.1%.

So what's on tap for this week? Is the downturn overblown and already over?

This is a massive week for market sentiment. The Senate, first and foremost, passed President Biden's $1.9 trillion stimulus plan over the weekend. On the one hand, stocks could pop from this. On the other hand, this makes inflation a foregone conclusion. Remember this, too- when the market gets what it expects, it's usually a sell signal rather than a buy signal. Markets look forward. Not to the past, and not to the present.

Time will tell where we go from here. While I still do not foresee a crash like we saw last March and feel that the wheels remain in motion for a healthy 2021, inflation is a genuine concern and could be here already.

According to Bloomberg , the price of gas and food already appear to be getting a head start on inflation. For January, Consumer Price Index data also found that the cost of food eaten at home rose 3.7 percent from a year ago — more than double the 1.4 percent year-over-year increase in all goods included in the CPI.

This could only be the start too. In its 2021 outlook report, the Economic Research Service for the U.S. Department of Agriculture forecast the food cost from grocery stores to rise 1 to 2% this year.

Moody's Analytics chief economist Mark Zandi also believes that Wall Street is significantly underestimating inflation's seriousness and warns it could affect every sector in the market — from growth to cyclicals.

I'm not trying to sound the alarm- but be very aware. These are just the early warning signs.

I still feel that a correction of some sort is imminent. The Nasdaq touched it briefly last week and is still about 2% away from one. Other indices could possibly follow. But don't fret. Corrections are healthy and normal market behavior, and we have been long overdue for one. Only twice in the last 38 years have we had years WITHOUT a correction (1995 and 2017).

Most importantly, this correction could be an excellent buying opportunity.

It can be a very tricky time for investors right now. But never, ever, trade with emotion. Buy low, sell high, and be a little bit contrarian. There could be some more short-term pain, yes. But if you sat out last March when others bought, you are probably very disappointed in yourself. Be cautious, but be a little bold too.

There's always a bull market somewhere, and valuations, while still somewhat frothy, are at much more buyable levels now.

There is optimism but signs of concern. A further downturn by the end of the month is very possible, but I don't think that a decline above ~20%, leading to a bear market, will happen.

Nasdaq: Buyable but Beware of the Risks 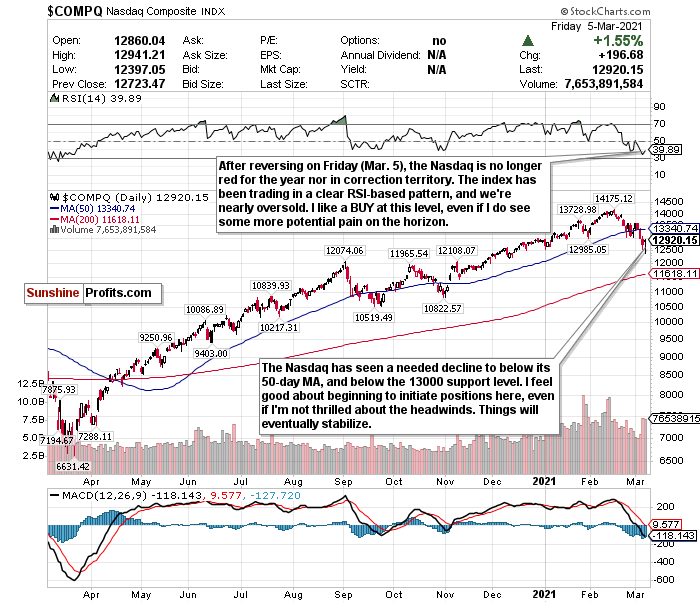 The Nasdaq is no longer in correction territory, nor is it negative for 2021 any longer. But beware- this could change very quickly. More pain could be on the horizon until we get some clarity on this bond market and inflation. However, this Nasdaq downturn is long overdue and starting to be buyable.

If you bought at the bottom on Friday before the afternoon reversal and made some quick gains, good on you. It actually didn’t end up being THAT bad of a week for the Nasdaq after Friday’s (Mar. 5) reversal.

Be that as it may, Friday’s (Mar. 5) reversal does not mean we’re out of the woods. According to Morgan Stanley’s chief U.S. equity strategist Mike Wilson , “10-year yields finally caught up to other asset markets. This is putting pressure on valuations, especially for the most expensive stocks that had reached nosebleed valuations.”

Expensive stocks? Nosebleed valuations? Sounds like tech to me.

Wilson also said that once valuation correction and repositioning are finished, then growth stocks can potentially “rejoin the party.”

The Nasdaq is now mostly flat for the year, its RSI is closer to oversold than overbought, and we’re at almost a 2-month low.

I also think it’s an outstanding buying opportunity for big tech companies with proven businesses and solid balance sheets. Take Apple (AAPL), for example. It’s about 15% off its January 26th highs. That is what I call discount shopping.

I like the levels we’re at, and despite the possibility of more losses in the short-run, it’s a good time to start to BUY. But just be mindful of the RSI, and don’t buy risky assets. Find emerging tech sectors or high-quality companies trading at a discount.

For more of my thoughts on the market, such as when small-caps will be buyable, more thoughts on inflation, and emerging market opportunities, sign up for my premium analysis today.