Investing During a Tightening Cycle

In about two months the Federal Reserve is expected to issue its first interest rate hike in three years, and presumably begin a new tightening cycle. Fed Chair Jerome Powell’s comments on 1/26/22 has the market expecting at least four hikes in 2022. Many pundits like to guess the number of hikes and percentage change, but we are not going to play that game, and instead focus on what asset classes work in this environment. To do that, we chose to look to the past; over the last 30 years there have been four tightening cycles in the U.S.

In the short term (six months), investing abroad is attractive, as not all central banks move in sync. Example, in January 2022 the People’s Bank of China cut its one-year prime rate. Moving further down the timeline to one year after the initial rate hike REITs (Real Estate Investment Trusts), equities, and commodities start to close the gap in performance. Two years into a cycle, oil, REITs, and dividend-paying equities are the best performing asset classes on average. One caveat on oil — it performed very well in all tightening cycles except for the latest one in 2016, when its returns across all timeframes were quite volatile. But almost all the asset classes in the table were positive on average over every period, with the notable exception being the U.S. dollar, indicating again that it’s not timing the market, it’s time in the market. 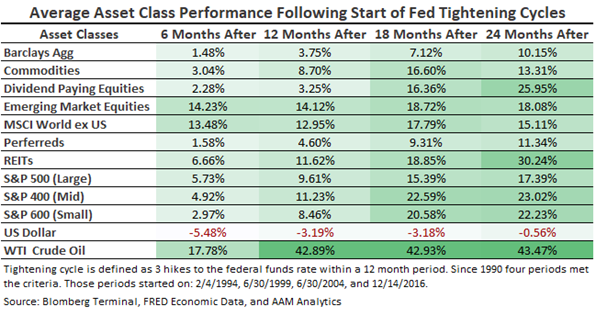 Related: To Issue or Not to Issue? That Is Every Municipality’s Question