Has the Government Run Out of Funding?

In recent months, there was a growing concern that policymakers would fail to come to an agreement to raise the debt ceiling. As a result, the Treasury would be at risk of running out of funds to pay the governments’ obligations and eventually default1 on the nation’s debt. Indeed, Treasury Secretary Janet Yellen confirmed that by mid- to late-October, the Treasury would run out of money after drawing down funds from the Treasury General Account (TGA) and exhausting its use of “extraordinary measures”2.

While these fears were certainly warranted following the near technical defaults experienced in 2011 and 2013 due to the same debt ceiling issue, by a narrow 219-206 vote, the House raised the debt ceiling on Tuesday, October 12th by $480 billion to $28.9 trillion, narrowly averting a technical default. With that said, this increase may only give the Treasury room to borrow normally until early December, at which point a lack of resolution on further fiscal negotiations between Democrats and Republicans could put the risk of a default back on the table.

Nonetheless, this short term resolution should allow the Treasury to increase its cash buffer, or balance at the TGA, somewhat. The Treasury has been spending down its elevated cash position since the beginning of the year3 rather than issue new Treasury bills, which has led to materially negative Treasury bill issuance year-to-date. As highlighted, as of September, T-bill supply has fallen by $1.2 trillion, putting downward pressure on short term rates as robust demand driven by abundant liquidity and the Fed’s QE program have been met with a dearth of supply.

For investors, this brief resolution should allow net T-bill issuance to turn and remain positive through the end of November, and a modest rebuild in the TGA should allow an easing in bank reserve growth. With that said, we have only deferred the debt ceiling issue for a couple of months at best. Until there is a more permanent fix, T-bill supply will likely turn negative again, suggesting the supply/demand dynamics holding down front-end yields are unlikely to abate. 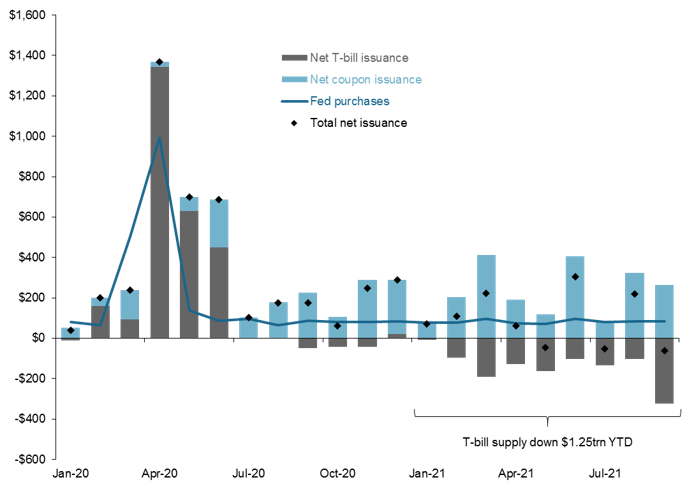 1 We highlight the potential implications of a technical default in a previous blog post here.

Related: Why Are Oil Prices Soaring?