Right from the open, stocks have been losing altitude yesterday, and value couldn‘t indeed overpower the tech slide. Long-dated Treasuries had a climactic day of incomplete reversal on outrageous volume. Regardless of the evidence of asset price inflation, there is almost universal short-term vulnerability, and yesterday‘s broad based selling spanning precious metals and commodities, confirms that. The dollar has been missing from the party though, only having reversed prior losses to close little changed on the day.

Are we seeing a trend change, or a time-limited yet powerful push lower? That depends upon the asset – in stocks, I look for the tech big names and healthcare to do worse than value (the VTV:QQQ ratio jumped up greatly through the week, portending the tech issues). Both silver and gold would be under pressure, and I look for the white metal to be mostly doing better overall. Oil and copper would take a breather while remaining in bull markets.

That roughly matches my very short-term idea for where the markets would trade, echoing the expressed, tweeted need to watch oil and copper turn the corner still yesterday (copper didn‘t, not confirming any intraday turnaround notions as valid) – the below being written 7hrs before the U.S. open:

(…) As yesterday's session moved to a close, the dollar erased opening losses, and went neutral. TLT's massive volume shows that yields are likely to stabilize here for now, and even decline a bit – HYG absolutely didn't convince me. The oil-copper tandem didn't kick in yesterday. Right now, we're in a weak constellation with both silver, oil, and stocks down. Copper's modest uptick doesn't cut it. So, the outlook for the European session on Fri is more bearish than bullish for stocks really, and gold rather sideways in the coming hours.

Would we get a bounce during the U.S. session? It‘s possible to the point of likely. The damage done yesterday though looks to have more than a few brief sessions to run to repair. If you were to be hiding in the not too greatly performing S&P 500 sectors before the uptrend reasserts itself, you would be rather fine. The same for commodities and metals which were solidly trending higher before – oil, platinum, copper. E.g. look at yesterday‘s low platinum volume, or at the modest Freeport McMoRan decline – these charts are not broken while I see silver relegated to sideways trading (with a need to defend against the bears sternly) and silver miners taking their time.

Just as I wrote yesterday, technology is the most precarious spot as long-term rates are turning and the dollar hasn‘t moved yet. Should it start coming to life (it did yesterday as the 10-year yield retreated from 1.60% back below 1.50%), overcoming the 91 – 91.5 resistance zone, that would help put into perspective the concerted selling we saw yesterday, especially if it continues in future days in similar fashion. 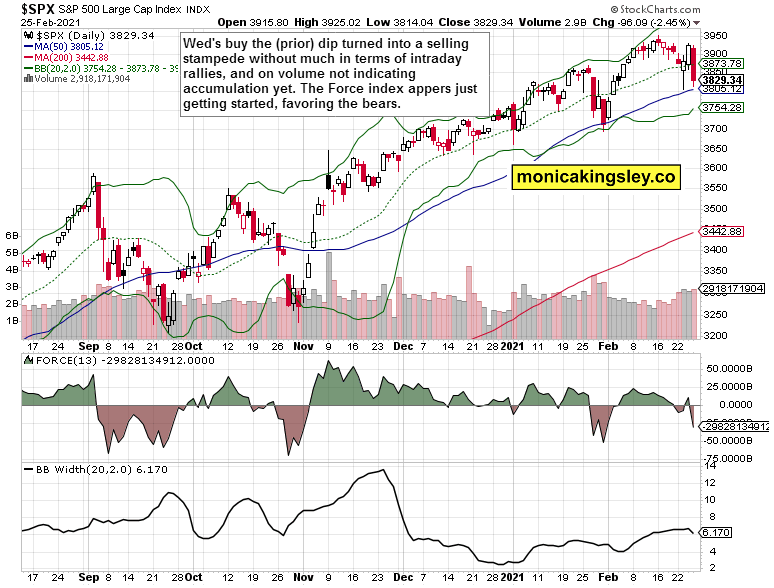 The Force Index shows that the bears have the upper edge now, and volume coupled with price action, shows no accumulation yet. The chart is worrying for it could reach the Jan lows fast if the sellers get more determined. 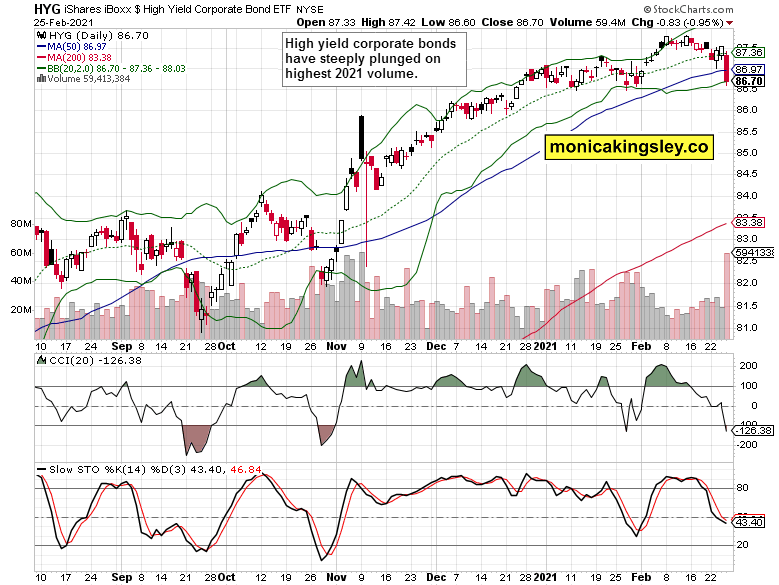 High yield corporate bonds (HYG ETF) reveal the damage suffered, underlined by the strong volume. High yields in TLT and LQD are starting to have an effect on stocks. 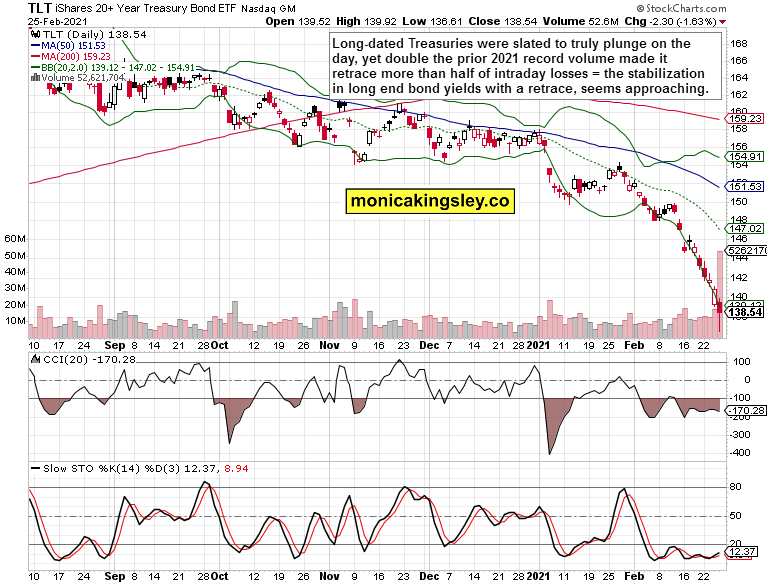 Another stressed bond market chart – long-term Treasuries show a budding reversal to the upside. Given yesterday‘s happenings in the 10-year bond auction with the subsequent retreat from high yields since, and the dollar moving over 90.50 as we speak, the signs are in place for the TLT retracing part of the steep slide as well. 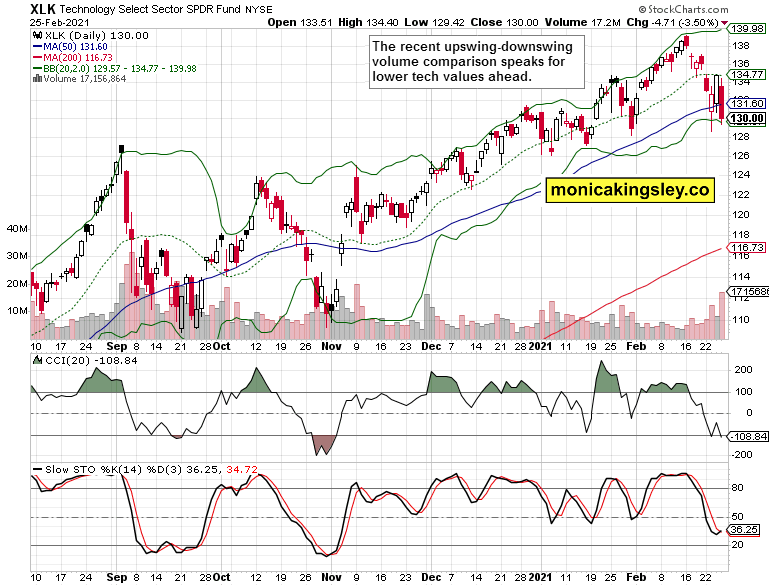 The momentum in tech (XLK ETF) is with the bears as the 50-day moving average got easily pierced yesterday again. It‘s still the heavyweights that matter (roughly similar to the healthcare situation here), and the sector remains very vulnerable to further downside.

The volatility index rose, but is far below the two serious autumn 2020 and the late Jan 2021 corrections. It even retreated on the day, regardless of the heavy S&P 500 selling. Neither the options traders are taking yesterday‘s move as a true game changer, even though it was (for the bond markets). Would the anticipated stock indices rebound today bring it down really substantially, spilling over into commodities too, and show that this indeed wasn‘t a turning point? 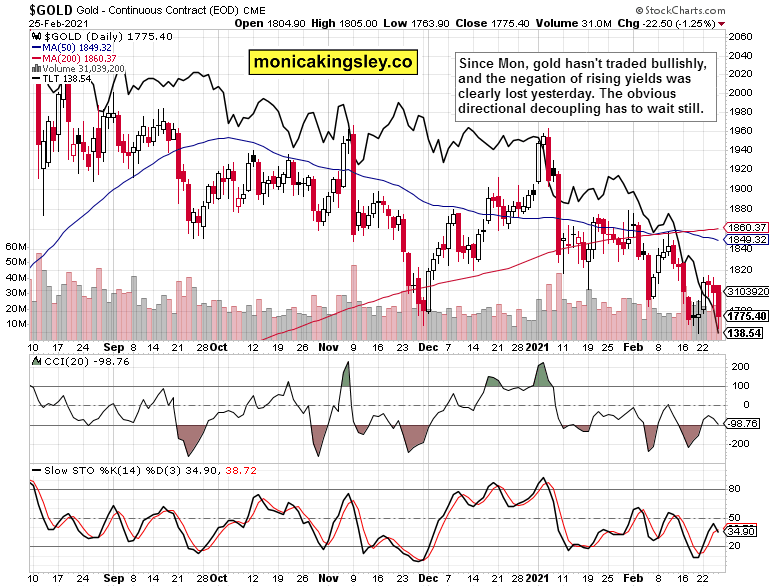 Gold didn‘t rise in spite of the falling long-term Treasuries for too long, as Tue and Wed hesitation (which I view with suspicion on both days) was resolved with a strong decline. This time, I am not calling for the yellow metal to rise the way I did a week ago. It‘s that the many precious metals market signals have become less constructive too.

Silver is being taken down a notch or two, and the miners are already reflecting that in yesterday‘s close. Silver miners steeply declining, the bullish outperformance of gold juniors vs. gold seniors was lost yesterday. Given the red ink on Thursday already in copper, and its arrival into oil today, the bears are having the short-term (more than several sessions) upper hand. The miners to gold ratio ($HUI:$GOLD and GDX:GLD) as the final ingredient missing, can keep on waiting.

Stock bulls got a harsh reality check, and everything isn‘t very fine yet in the tech arena. By the shape of things thus far, today‘s rebound is more likely than not to turn out a dead cat bounce, and more short-term downside remains likely since Monday, regardless of all the value stocks performance.

Gold and silver didn‘t escape the bloodbath either, and aren‘t out of the woods – neither gold, nor silver. Treasury yields are taking a good look around, having a chance to stabilize and retreat to a degree, but gold appears unfazed thus far, and the commodities‘ dynamics doesn‘t bode well. On the other hand, the dollar looks getting ready to move higher over the coming days, and thanks to the short-term correlation between the two turning positive, that would help the embattled yellow metal down the road.