S&P 500 paused to a degree, but bonds didn‘t – we‘re far from a peak. That though doesn‘t mean a brief correction (having a proper look at the chart, sideways consolidation not reaching more than a precious couple of percentage points down) won‘t arrive still this month. It‘s a question of time, and I think it would be driven by tech weakness as the sector has reached lofty levels. It‘ll go higher still, but this is the time for value and smallcaps.

And when the dollar starts rolling over to the downside (I‘m looking at the early Dec debt ceiling drama to trigger it off), emerging markets would love that. And commodities with precious metals too, of course – sensing the upcoming greenback weakness has been part and parcel of the gold and silver resilience of late. Precious metals are only getting started, but the greatest fireworks would come early spring 2022 when the Fed‘s failure to act on inflation becomes broadly acknowledged.

For now, they‘re still getting away with the transitory talking points, and chalking it down to supply chain issues. As if these could solve the balance sheet expansion or fresh (most probably again short-dated) Treasuries issuance (come Dec) – the Fed is also way behind other central banks in raising rates. Canada, Mexico and many others have already moved while UK and Australia are signalling readiness – the U.S. central bank is joined by ECB in hesitating.

Don‘t look for the oil breather to last too long – black gold is well bid above $78, and hasn‘t made its peak in 2021, let alone 2022. As I wrote on Friday, its downswing that works to increase disposable income (serving as a shadow Fed funds rate in the zero rates environment), would prove short-lived. The real economy would have to come to terms with stubbornly high oil prices – and it will manage. The yield curve is starting to steepen modestly again, and fresh spending initiatives would breathe some life into the stalling GDP growth. Next year though, don‘t be surprised by a particularly weak (even negative) quarterly reading, but we aren‘t there by a long shot, I‘m telling you. 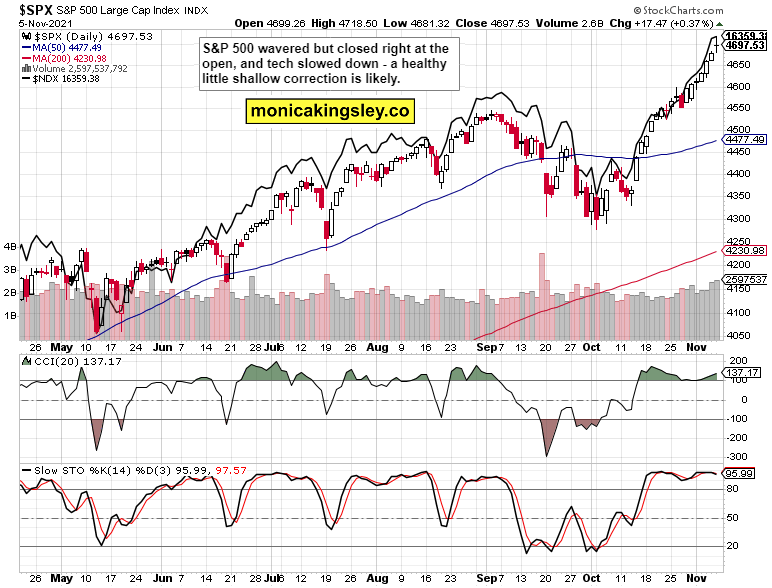 S&P 500 looks getting ripe for taking a pause – the rising volume isn‘t able to push it much higher intraday.

Gold and silver continue reversing the pre-taper weakness, and miners are indeed joining in. I‘m looking for more gains with every dip being bought. 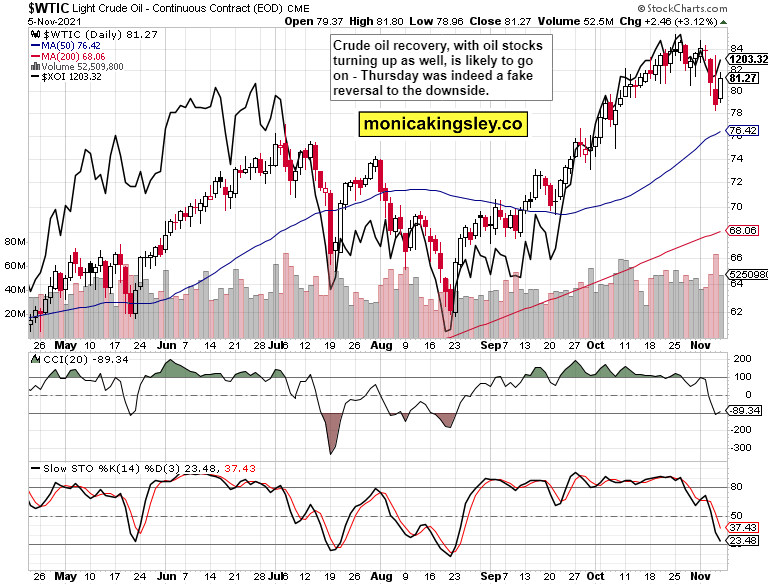 Crude oil hasn‘t peaked, and looks getting ready to consolidate with a bullish bias again. $85 hasn‘t been the top, and the energy sector remains primed to do well. 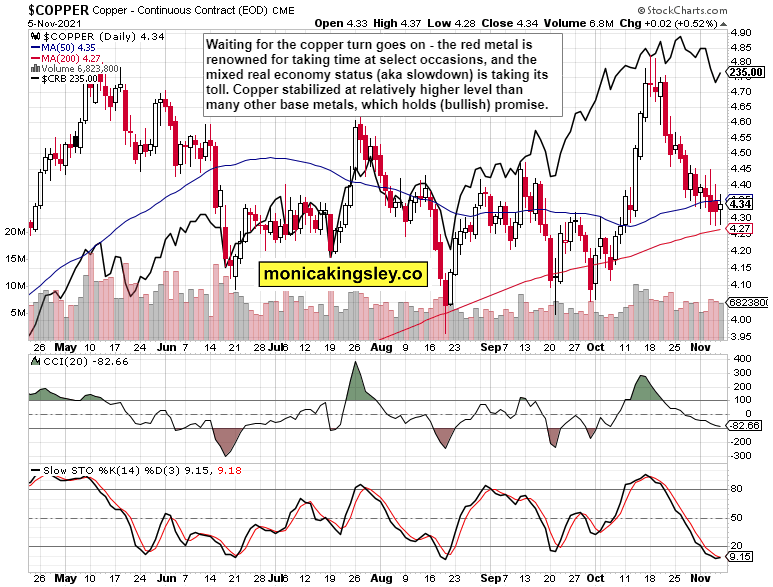 Copper is deceptively weak, and actually internally strong when other base metals are examined. As more money flows into commodities, look for the red metal to start doing better – commodities haven‘t topped yet. 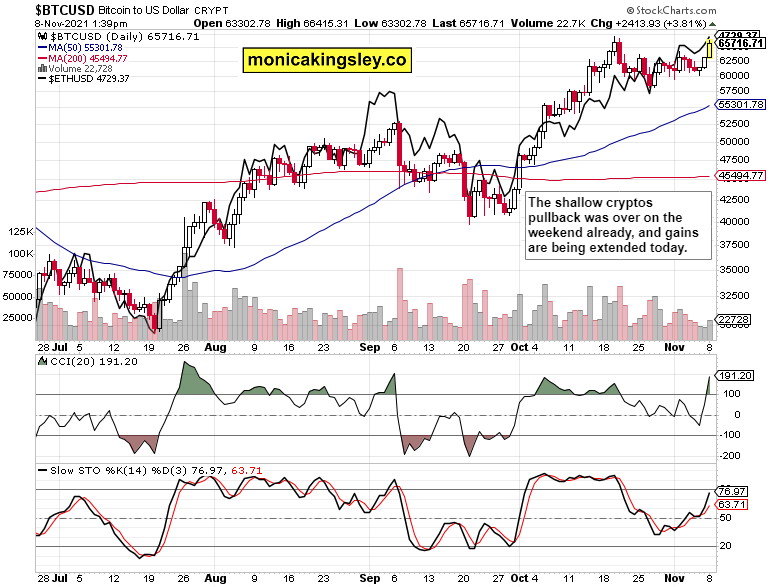 Bitcoin and Ethereum consolidation has come to an end, and the pre-positioned bulls have a reason to celebrate as my prior scenario– stabilization followed by slow grind higher is what‘s most likely next – came to fruition.

S&P 500 breather is a question of time, but shouldn‘t reach far on the downside – the credit markets don‘t support it. Commodities are catching up in the (dovish as assessed by the markets too) taper aftermath, and precious metals are sniffing the dollar‘s weakness a few short weeks ahead. With fresh money not needed to repair commercial banks‘ balance sheets, it flows into the financial markets, and the taper effects would be negated by the repo operations – yes, I‘m not looking for a liquidity crunch.