Slowly At First, Then All At Once

Bull markets always seem to end the same – slowly at first, then all at once.

My recent discussion on why March 2020 was a “correction” and not a “bear market” sparked much debate over the somewhat arbitrary 20% rule.

“Price is nothing more than a reflection of the ‘psychology’ of market participants. A potential mistake in evaluating ‘bull’ or ‘bear’ markets is using a ‘20% advance or decline’ to distinguish between them.”

Interestingly, while there are some “rules of thumb” for falling prices such as:

It’s all a bit arbitrary and rather pointless.

The Reason We Invest

It is essential to understand what a “bull” or “bear” market is as investors.

Here is another significant definition for you.

Investing is the process of placing “savings” at “risk” with the expectation of a future return greater than the rate of inflation over a given time frame.

Investing is NOT about beating some random benchmark index that requires taking on an excessive amount of capital risk to achieve. Instead, our goal should be to grow our hard-earned savings at a rate sufficient to protect the purchasing power of those savings in the future as “safely” as possible.

As pension funds have found out, counting on 7% annualized returns to make up for a shortfall in savings leaves individuals in a vastly underfunded retirement situation. Moreover, making up lost savings is not the same as increasing savings towards a future required goal.

Nonetheless, when it comes to investing, Bob Farrell’s Rule #10 is the most relevant:

Of this, there is no argument.

However, understanding the difference between a “bull” and a “bear” market is critical to capital preservation and appreciation when the change occurs.

So, what defines a “bull” versus a “bear” market. 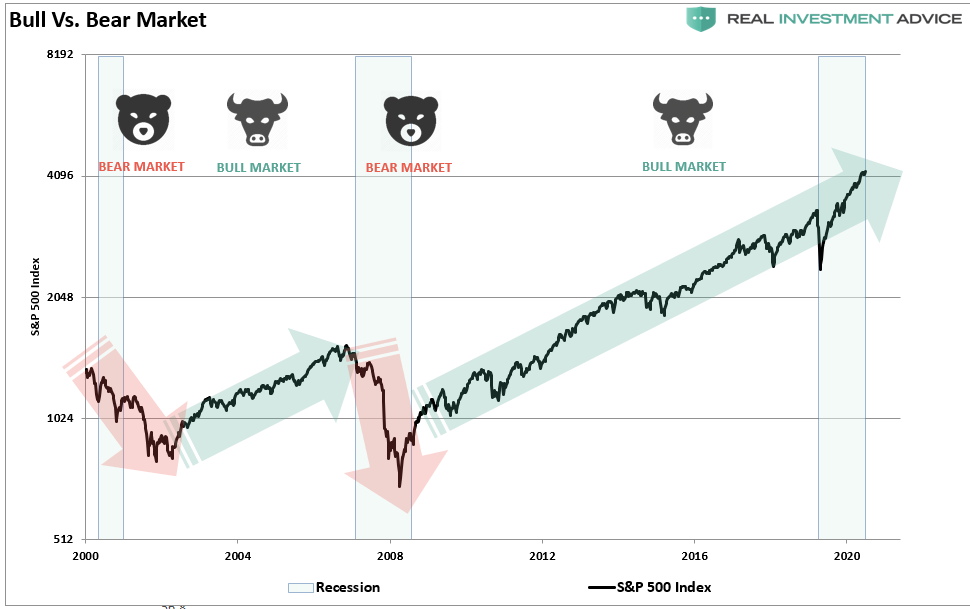 Bull and bear markets are evident with the benefit of hindsight.

The problem, for individuals, always comes back to “psychology” concerning our investing practices. During rising or “bullish,” markets, the psychology of “greed” keeps individuals invested longer and entices them into taking on substantially more risk than realized. “Bearish,” or declining, markets do precisely the opposite as “fear” overtakes the investment process.

Most importantly, it is difficult to know “when” the markets have changed from bullish to bearish. Over the last decade, several significant corrections have certainly looked like the beginning of turning from a “bull” to a “bear” market. Yet, after a short-term corrective process, the upward trend of the market resumed.

So, while it is evident that missing a bear market is incredibly important to long-term investing success, it is impossible to know when the markets have changed.

The next couple of charts will build off of the weekly price chart above.

“In the short run, the market is a voting machine but in the long run it is a weighing machine” – Benjamin Graham

In the short term, which is from a few weeks to a couple of years, the market is simply a “voting machine” as investors scramble to chase what is “popular.” Then, as prices rise, they “panic buy” everything due to the “Fear Of Missing Out or F.O.M.O.” Then, they “panic sell” everything when prices fall. However, these are just the wiggles along the longer-term path.

In the long-term, the markets “weigh” the substance of the underlying cash flows and value. Thus, during bull market trends, investors become overly optimistic about the future bid-up prices beyond the practical aspects of the underlying value. The opposite is also true, as “nothing has value” during bear markets. Such is why markets “trend” over time. Eventually, excesses in valuations, in both directions, get reverted to, and beyond, the long-term means. 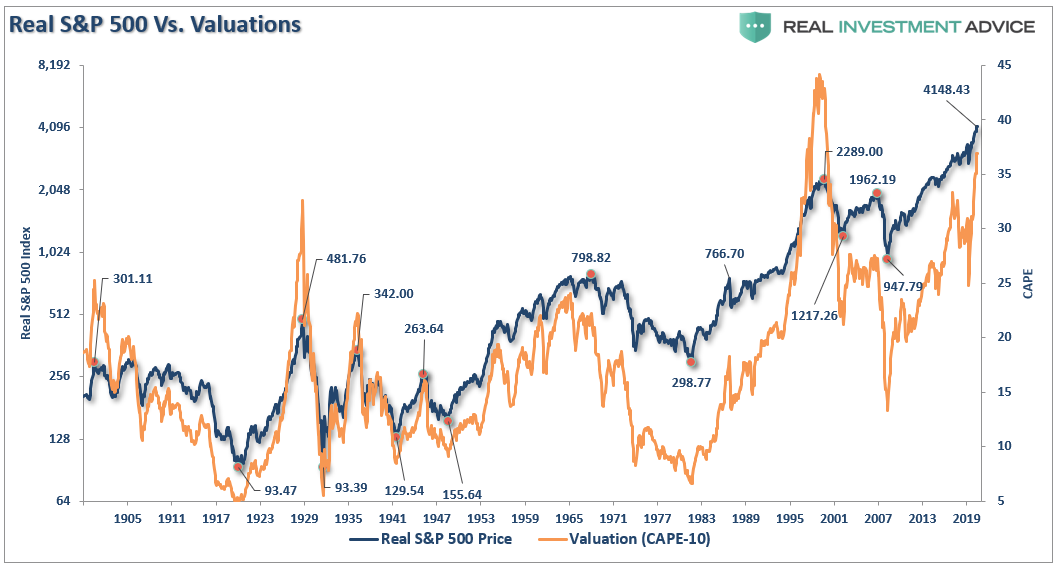 While the long-term picture is relatively straightforward, valuations still don’t do much in terms of telling us “when” the change is occurring.

Change Starts Slowly, Then All At Once

“Tops are a process and bottoms are an event” – Doug Kass

The keyword is TREND. 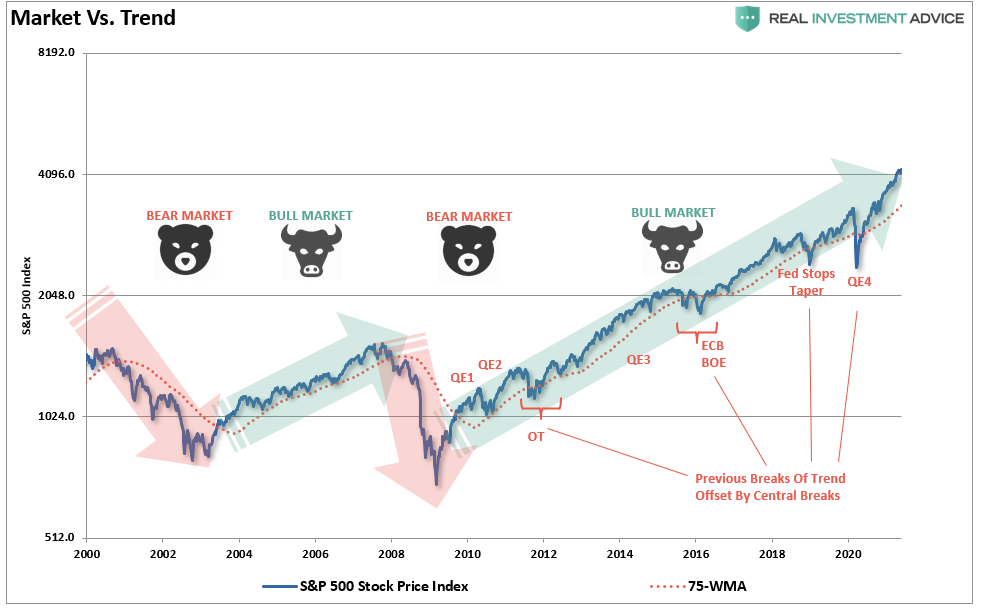 Since 2009, there are four occasions where the long-term moving average was violated but did not lead to a longer-term change in the trend.

Each of these declines only gets classified as “corrections.” The market did not sustain the break of the long-term trend, valuations did not revert, and psychology remained bullish.

“Like a rubber band stretched too far – it must get relaxed in order to stretch again. The same applies to stock prices that are anchored to their moving averages. Trends that get overextended in one direction, or the other, always return to their long-term average. Even during a strong uptrend or strong downtrend, prices often move back (revert) to a long-term moving average.”

Since 2017, with the globally coordinated interventions of Central Banks, those deviations have started exceeding levels not seen previously. As of the end of May, the index was nearly 800 points above the long-term average or 4x the normal warning level. 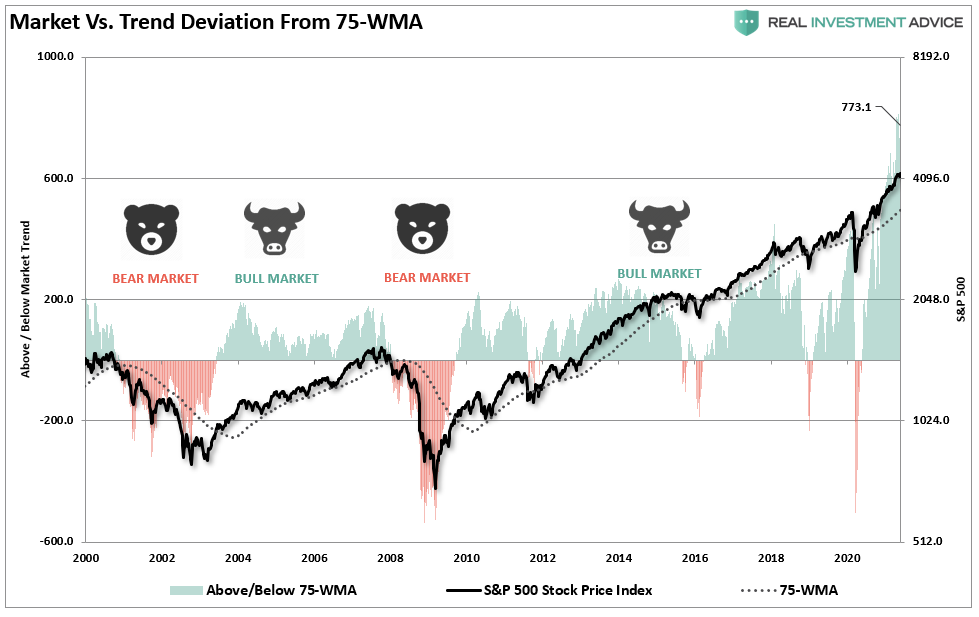 We can see the magnitude of the current deviation by switching to percentage deviations. Historically, 10% deviations have preceded corrections and bear markets. Currently, that deviation is 22.5% above the long-term mean. 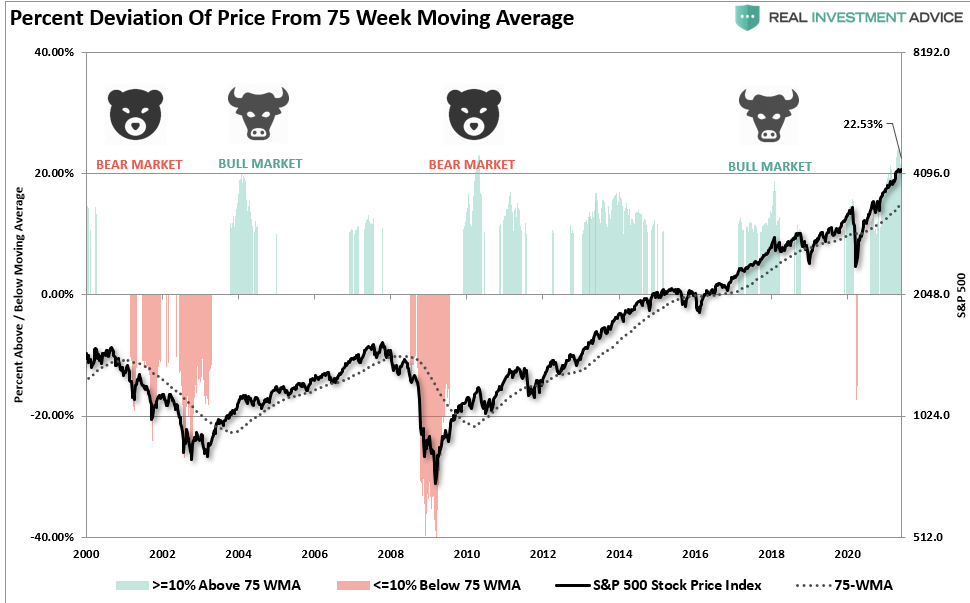 Understanding that change is occurring is what is essential. But, unfortunately, the reason investors “get trapped” in bear markets is that when they realize what is happening, it is far too late to do anything about it.

Bull markets are lure investors into believing “this time is different.” When the topping process begins, that slow, arduous affair gets met with continued reasons why the “bull market will continue.”  The problem comes when it eventually doesn’t. As noted, “bear markets” are swift and brutal attacks on investor capital.

“‘The more it changes, the more it’s the same thing.’ I have always thought this motto applied to the stock market better than anywhere else. Now the really important part of the proverb is the phrase, ‘the more it changes.’

The economic world has changed radically and will change even more. Most people think now that the essential nature of the stock market has been undergoing a corresponding change. But if my cliché is sound, then the stock market will continue to be essentially what it always was in the past, a place where a big bull market is inevitably followed by a big bear market.

In other words, a place where today’s free lunches are paid for doubly tomorrow. In the light of recent experience, I think the present level of the stock market is an extremely dangerous one.”

Pay attention to the market. The action this year is very reminiscent of previous market topping processes. Tops are hard to identify during the process as “change happens slowly.” The mainstream media, economists, and Wall Street will dismiss pickup in volatility as simply a corrective process. But when the topping process completes, it will seem as if the change occurred “all at once.”

Related: Warning Signs A Correction Is Ahead