I called Jay Powell's bluff a week ago. Remember when he said last week that we're still far from The Fed's inflation targets?

Well, I was right to doubt him. The market didn't like his change in tone Thursday (Mar. 5).

You see, when bond yields are rising as fast as they have, and Powell is maintaining that Fed policy won't change while admitting that inflation may " return temporarily ," how are investors supposed to react? On the surface, this may not sound like a big deal. But there are six things to consider here:

Look, it's not the fact that bond yields are rising that are freaking out investors. Bond yields are still at a historically low level, and the Fed Funds Rate remains 0%. But it's the speed at which they've risen that are terrifying people.

According to Bloomberg , the price of gas and food already appear to be getting a head start on inflation. For January, Consumer Price Index data also found that the cost of food eaten at home rose 3.7 percent from a year ago — more than double the 1.4 percent year-over-year increase in all goods included in the CPI.

I'm not trying to sound the alarm- but be very aware. These are just the early warning signs.

So, where do we go from here? Time will tell. While I still do not foresee a crash like we saw last March and feel that the wheels remain in motion for a healthy 2021, that correction that I've been calling for has already started for the Nasdaq. Other indices could potentially follow.

Corrections are healthy and normal market behavior, and we have been long overdue for one. Only twice in the last 38 years have we had years WITHOUT a correction (1995 and 2017).

Most importantly, this correction could be an excellent buying opportunity.

It can be a very tricky time for investors right now. But never, ever, trade with emotion. Buy low, sell high, and be a little bit contrarian. There could be some more short-term pain, yes. But if you sat out last March when others bought, you are probably very disappointed in yourself. Be careful, but be a little bold right now too.

There's always a bull market somewhere, and valuations, while still somewhat frothy, are at much more buyable levels now.

There is optimism but signs of concern. A further downturn by the end of the month is very possible, but I don't think that a decline above ~20%, leading to a bear market, will happen.

Nasdaq: From Overbought to Oversold in 3 Weeks? 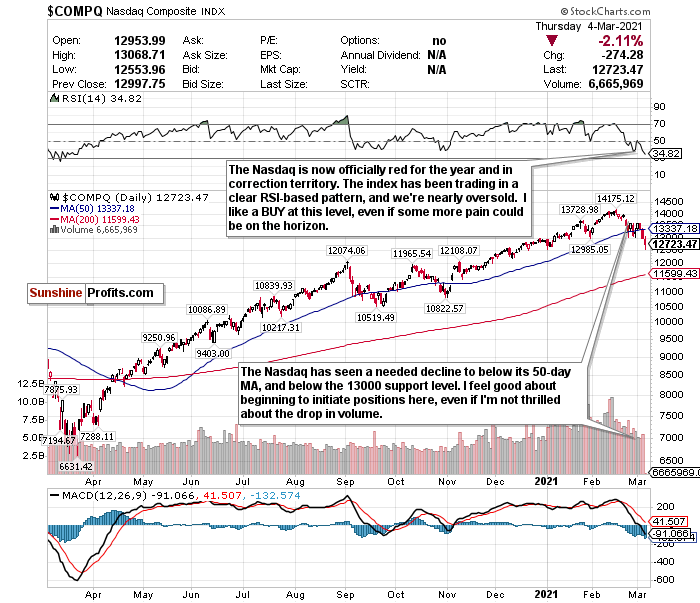 The Nasdaq is finally in correction territory! I have been waiting for this. It’s been long overdue and valuations, while still frothy, are much more buyable. While more pain could be on the horizon until we get some clarity on this bond market and inflation, its drop below 13000 is certainly buyable.

The Nasdaq has also given up its gains for 2021, its RSI is nearly oversold at about 35, and we’re almost at a 2-month low.

Plus, it’s safe to say that Cathie Wood, the guru of the ARK ETFs, is the best growth stock picker of our generation. Bloomberg News ’ editor-in-chief emeritus Matthew A. Winkler seems to think so too. Her ETFs, which have continuously outperformed, focus on the most innovative and disruptive tech companies out there. Not to put a lot of stock in one person. But it’s safe to say she knows a thing or two about tech stocks and when to initiate positions- and she did a lot of buying the last few weeks.

I also think it’s an outstanding buying opportunity for big tech companies with proven businesses and solid balance sheets. Take Apple (AAPL), for example. It’s about 30% off its all-time highs. That is what I call discount shopping.

What’s also crazy is the Nasdaq went from overbought 3 weeks ago to nearly oversold this week. The Nasdaq has been trading in a clear RSI-based pattern, and we’re at a very buyable level right now.

I like the levels we’re at, and despite the possibility of more losses in the short-run, it’s a good time to start to BUY. But just be mindful of the RSI, and don’t buy risky assets. Find emerging tech sectors or high-quality companies trading at a discount.

For more of my thoughts on the market, such as the streaky S&P, inflation, and emerging market opportunities, sign up for my premium analysis today.

Related: Is the Worst for Stocks Over?