It has been tough to say anything nice about the municipal market over the last year and a half. Consistent inflows into bond funds have held ratios on municipals near historic lows. Rates have stayed so low that most might have missed that the long-term municipal bond volume set a record last year in issuance at $483.6 billion. Some may be even more surprised to learn that halfway through 2021 we are ahead of the 2020 record-setting pace. In the graph below we can see a month-to-month comparison of municipal new issue supply to the first half of 2020/2021. 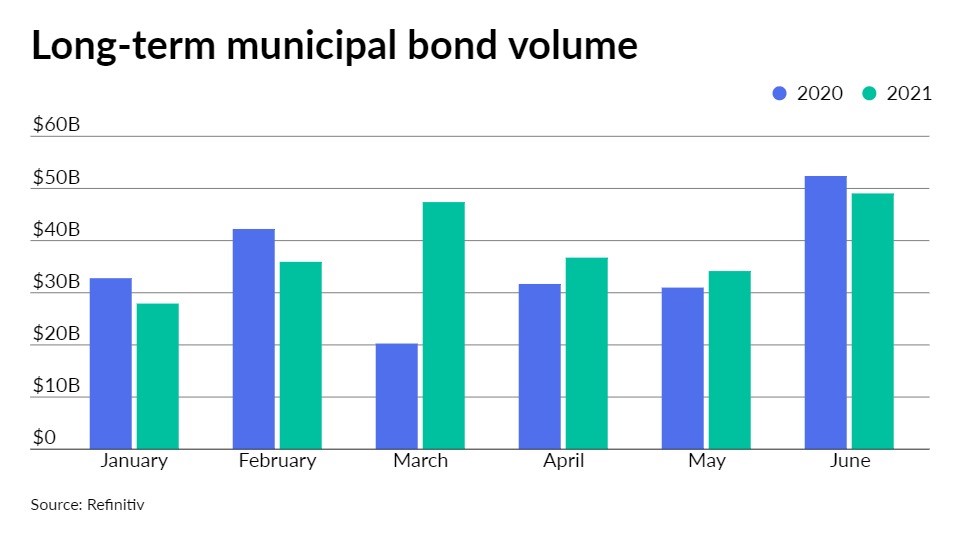 In the first quarter of 2021, we saw $111.24 billion of new issue municipal supply; that is a 16% increase from 2020. In the second quarter, we saw a 4% increase in issuance at $119.94 billion. This equates to an approximate 10% increase in supply year over year. With this increase, what can we expect in the near future with regard to supply going into the end of the year? Let’s look at a few factors that are likely to affect the New Issue Market.

On August 10 the U.S. Senate passed the $1.1 trillion IIJA. In that bill there will be $550 billion of new spending over five years on traditional infrastructure such as bridges, roads, water, airports, etc. $340 billion (62%) of this spending will flow through traditional municipal issuers, while $210 billion will go to sectors that do not issue municipal bonds. There are, however, a few things left out of the IIJA that could affect supply and yields moving forward such as refundings, direct-pay bonds, and the state and local tax (SALT) deduction. These are issues that Congress hopes to address in the Budget Reconciliation Bill.

Now that the IIJA has moved to the House we are only waiting for it to go to vote. House Speaker Pelosi, however, has voiced her plan to hold up the IIJA until the Senate has passed the $3.5 trillion Budget Reconciliation Bill. Nobody seems to know what exactly is going to be in this bill, but we believe it will – in some way – deal with the refunding and SALT issues not addressed in the IIJA.

Even though we have seen an increase in supply for the first half of the year (compared to 2020), we believe it is safe to assume that we will see a much larger increase going into the end of the year. Historical norms suggest that we will see more supply at the end of the year as issuers try and fill their budgetary shortfalls prior to year-end. The end of this year, however, has the potential to see a much greater increase in supply than the norm. The relative lack of volatility in yields through the summer have allowed many issuers to take a “wait and see” approach on how much money they will be receiving from the government. Had rates moved higher, we may have seen many issuers take on new debt so as to not to lose their chance to do so in this low interest rate environment. As year-end draws closer, they may not be able to wait any longer and we could see a rush to the market to issue paper ahead of any settlement on either bill. The increase in supply going into the end of the year could create a potential opportunity to grab some yield.

Related: Is the Market “IFFY”?