The Metaverse: What Every Early-Stage Investor Needs to Know

You may not be familiar with the term metaverse, but if you’ve been a consumer of popular books, movies and video games over the past 30 years or so, you probably are aware of the concept.

Consider films like The Matrix or Ready Player One, set in vast virtual realities in which people live, work and play. In Neal Stephenson’s 1992 science fiction novel Snow Crash, believed to be the first work to contain the word metaverse, online inhabitants make transactions using digital currencies, as hyperinflation has all but destroyed fiat currency. No, really, Stephenson wrote this in 1992.

The reason I’m bringing this up now is because, like a lot of the best ideas from sci-fi, the metaverse could soon make the leap from page to reality.

If you listened to Facebook’s earnings call last week, you know what I’m talking about. CEO Mark Zuckerberg must have mentioned the word at least 20 times in his effort to describe the social media company’s plans to begin developing an immersive 3D internet-like experience.

Facebook, which reported record quarterly revenue of $29 billion, is in a very good position to bring such a high-tech, high-concept experience to consumers. Besides having a staggering 2.9 billion active monthly users, the company already sells the Oculus virtual reality (VR) headset and Portal smart display screen. It also will be releasing smart glasses in partnership with Ray-Ban.

“This is going to be the successor to the mobile internet,” Zuckerberg told shareholders last Thursday. “You’re going to be able to access the metaverse from all different devices and different levels of fidelity from apps on phones and PCs to immersive virtual and augmented reality devices.”

A true metaverse, as seen in Ready Player One or Tron, may still be a few years away. In the meantime, Facebook and other pioneers are busy laying the groundwork for a future that permits families, friends, coworkers and more to meet and interact in shared digital spaces that look and feel authentic.

I’m not just talking about VR headsets and video conferencing. Even in cyberspace, people will need real-world services, from entertainment to finance. In the coming years, I imagine companies as various as Amazon, Netflix, DoorDash and Robinhood all rolling out their own contributions to a shared metaverse. Digital currencies will also be essential, which should benefit crypto miners and brokers.

With that in mind, I urge investors to keep an eye on this space.

Take Robinhood, for instance. Shares of the commission-free trading app favored by millennials began trading on Nasdaq last week after years of speculation. Before that, participation was restricted to angel investors, venture capitalists and other accredited investors who must meet certain capital requirements.

That includes rappers Snoop Dogg and Nas, both of whom invested in Robinhood seven years ago, according to BNN Bloomberg’s Jon Erlichman. At the time, the company was worth $62 million. Today, it’s valued at $32 billion, an incredible 516-fold increase. 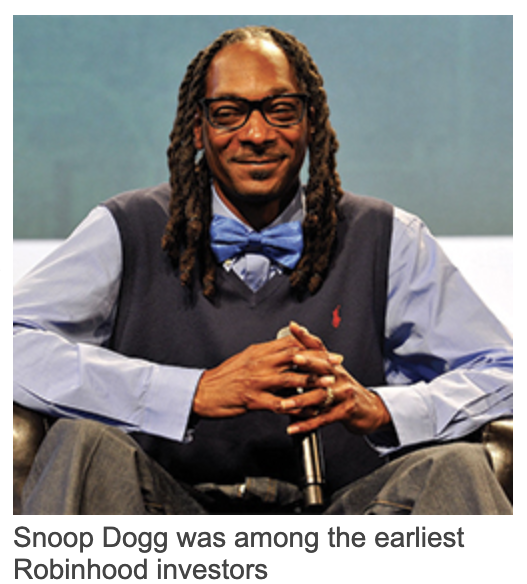 Think about it: Only in America can a twentysomething Bulgarian immigrant (Robinhood founder Vlad Tenev) launch an app that disrupts the global brokerage industry. Only in America can two men whose childhoods were spent on the streets, with numerous run-ins with the law, become fabulously successful and wealthy through not only their musical talents but investment decisions.

This brings me to a topic I’ve written about before: the dearth of new public listings.

The sad truth is that, instead of having to deal with the (growing) mountain of rules and regulations that publicly traded firms must comply with, many companies have just chosen to stay private for longer. And once companies finally get around to tapping public markets, they may have already gone through their strongest period of growth. Robinhood was about eight years old at the time of its initial public offering (IPO), which is slightly less than the median 12 years old that most venture-backed tech companies were when they listed.

This hurts retail investors and families more than anyone else. Returns on private equity can often be very high, but again, everyday Americans generally don’t have access.

Fortunately, this trend appears to be reversing. As of July 29, there were 261 new listings so far in 2021, which is the most of any full year going back to 2014, according to Renaissance Capital. Meanwhile, companies have raised a record $94.2 billion, an increase of more than 20% from 2020. The reason? In my opinion, Jay Clayton deserves a lot of the credit.

Clayton was one of former President Donald Trump’s best picks to head a federal agency. The Securities and Exchange Commission (SEC) chairman, who resigned in December 2020, made it his mission to encourage more companies to list on public exchanges earlier in their lifecycles.

He must have done something right.

“That bothers me,” Clayton said in 2018, referring to the lack of market availability. “If that trend continues, a much more select group is participating in the growth of the economy.”

It’s Not too Late to Be Early

I believe one of the most attractive early-stage investments remains cryptos, particularly Bitcoin and Ether, both of which are still in their infancy with incredible upside potential.

Others have the same idea, apparently. The number of people who use cryptocurrencies shot past 220 million for the first time, according to research by Crypto.com. As of the end of June, as many as 221 million people around the world were participating in the crypto ecosystem, including trading, investing and making transactions in Bitcoin, Ether and other digital coins.

And it’s not just individual investors who are driving adoption. Many companies have reported holding Bitcoin on their balance sheets, among the largest being Michael Saylor’s MicroStrategy (holding more than 105,000 BTC at a dollar value of $4.1 billion), Tesla (43,200 BTC/$1.5 billion) and Square (8,027 BTC/$220 million).

In the first half of 2021, in fact, Ether trading volume surged 1,400%, thanks in large part to institutions taking exposure, according to CoinDesk. The Ether market grew three times faster than Bitcoin in the first six months. The world’s second largest crypto by market cap outperformed Bitcoin in not only volume growth but also price performance, similarly outshining the S&P 500 and gold in price performance.

Related: The Blockchain Revolution May Not Be Televised, But It's Happening