The Metaverse Is A $1 Trillion Revenue Opportunity. Here’s How To Invest

Quick: What do Mickey Mouse, the Gucci bee and Snoop Dogg have in common? Besides being animal-themed, all three are coming to a metaverse near you.

The metaverse, as I’ve explained before, is part of the next iteration of the internet some are calling Web 3.0—and it promises to upend everything as we know it. Within the next few years, we will all work, play, socialize and invest in this all-encompassing ecosystem, whether that means attending a professional conference at a virtual Four Seasons hotel, shopping for a new designer handbag for our digital avatar or swinging through the New York City skyline with Spider-Man.

First, a short primer on the history of the internet and where we believe it’s headed. The earliest days of the internet, known as Web 1.0, were characterized by static, one-way webpages—think Netscape and Yahoo. Users were little more than passive observers.

Next came Web 2.0, the period we’re currently in. Controlled by a disproportionately small number of companies (Facebook, YouTube, etc.), the internet of today is highly centralized despite users’ role as an active participant.

That brings us to Web 3.0, which will usher in a whole new level of experience that, to some people, may sound more like Tron than real life. Here’s a somewhat plausible scenario of what I’m talking about: It’s the year 2026, and you’re about to go on a first date with someone you met on Planet Theta, a virtual reality (VR) dating platform set to launch next year. You strap on a VR headset—perhaps one made by Meta Platforms, formerly known as Facebook—and because you want to make the best possible first impression, you dress your avatar in an Armani suit and pair of Ray-Ban non-fungible token (NFT) sunglasses that you purchased with Ether (ETH). After spending some time strolling through an enchanted forest, you and your date watch the latest Disney movie, projected against the wall of a magical castle.

Everything Old Is New Again

If you’re of a certain age, you probably recall feeling similarly lost when the internet came to prominence in the 1990s. (I recommend watching this clip from 1994 of Today anchors Katie Couric, Bryant Gumbel and Elizabeth Vargas arguing comically over what the @ sign means. “What is internet anyway?” a clearly perplexed Gumbel asks.)

Fast forward to now, and the internet’s value to the world economy is incalculable. Internet-native companies such as the FANG stocks—Facebook, Amazon, Netflix and Google—are among the largest and most influential in human history.

It’s no wonder, then, why many companies and investors are scrambling to gain a foothold in the emerging digital ecosystem that is the metaverse, estimated by Grayscale Investments to be a trillion-dollar revenue opportunity. Investment banking group Jeffries believes investing in the metaverse will be like investing in the earliest days of the internet. Head of thematic research Simon Powell says investors should focus first on hardware providers, then software providers, then on companies that operate within the metaverse. Initially that may mean considering traditional tech companies like Nvidia, Intel, Cisco and Apple, which are well positioned to reap the benefits of increased demand for semiconductor chips, processors, cloud services and the like.

VR headsets have already become must-have gadgets – sales for which are expected to go mainstream as soon as this decade. Remarkably, Meta’s Oculus Quest 2 headset is believed to have outsold Microsoft’s Xbox gaming console this year. And by 2025, the total value of augmented and virtual reality products, including the Oculus, is forecast to hit $36 billion, according to market research firm International Data Corporation (IDC). That would be a ninefold increase from $4 billion this year, representing an incredible compound annual growth rate (CAGR) of 68%.

Not Just For Gaming

I should reemphasize the point that VR headsets and goggles will not just be for gaming, though that will be an increasingly attractive investment case, with gaming companies such as Roblox, Electronic Arts, Activision Blizzard and others expected to be big players.

In an end-of-the-year blog post, Bill Gates says he believes that in the next “two or three years,” most virtual meetings will move from two-dimensional, Zoom-style interfaces to the metaverse. “There’s still some work to do, but we’re approaching a threshold where the technology begins to truly replicate the experience of being together in the office,” Gates writes. He adds that Microsoft, whose board Gates stepped down from in May, is set to release its own “interim” VR tools next year in conjunction with its planned virtual workspace, Mesh for Microsoft Teams.

Looking Sharp In The Metaverse

And then there’s NFTs, which are digital certificates that prove ownership of property, digital as well as analog. If Ether, Bitcoin and other cryptos are the money of the metaverse, then NFTs represent the stuff that fills up the metaverse.

NFTs are already high in demand, with new entrants arriving every day. This year alone, NFTs trading volume is estimated to surpass $24 billion, up massively from only $0.1 billion last year, according to DappRadar.

I find it particularly interesting that luxury goods companies have been among the most aggressive in terms of releasing new NFTs. Luxury designers and retailers tend to be very traditional and have historically resisted digitization. Many of them missed the e-commerce surge of the 1990s and 2000s.

Understandably so, they don’t want to make the same mistake this cycle. We’ve seen Gucci, Burberry, Nike, Adidas and many more announce plans to offer digital versions of their apparel to consumers who seek to turn heads in the metaverse. And with no raw materials for companies to buy, no warehouses or overstock to account for, profit margins have been considerable.

Not to be outdone, former First Lady Melania Trump is launching her first NFT platform, which will release new NFTs on a regular basis. That includes “Melania’s Vision,” a watercolor project that began trading last week. 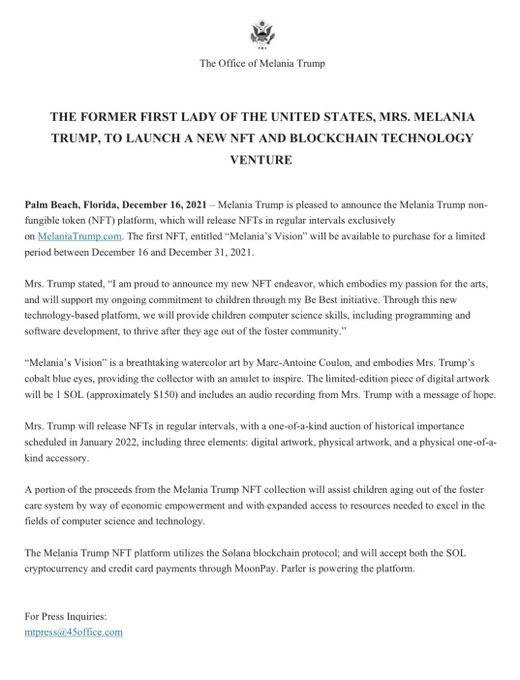 U.S. Global Investors believes so strongly in the future of NFTs that, in October, we announced our investment in Network Entertainment, a Vancouver-based media production company that plans to create and distribute NFTs using its rich library of award-winning content.

Believe it or not, NFTs can also include virtual real estate. According to UBS, investment firms have been investing millions in digital land across a number of metaverse platforms, including Decentraland and The Sandbox.

At the moment, the spotlight is on Snoop Dogg. Back in September, the legendary rapper announced via Twitter that he was “entering the metaverse” on Sandbox, a blockchain-based mobile game that allows players to buy and sell digital assets, including real estate. An anonymous Sandbox player made headlines earlier this month when he purchased an in-game plot of land next to Snoop Dogg’s virtual mansion for nearly $500,000. Yes, that’s half a million real USD.

Total sales within the virtual world of The Sandbox, in fact, have surged since the Doggfather made his announcement. Daily trading volume of NFTs exceeded $180 million this month, up from around $800,000 just a year earlier. Once you have the land, then comes development. Again, according to UBS: “Architects are creating office buildings, luxury villas, entertainment complexes and even malls”—all of which people will be able to visit and enjoy in three dimensions without leaving their homes.

Related: Having Your Doubts About The Metaverse?