I’ve enjoyed the rise and rise of the Libertarian dream of ungoverned finance. In 2022, facing the reckoning, it’s now quite funny to see the Libertarians saying we need regulations. As I’ve always said: you cannot have money without governance.

The challenge here however is what governance? Do we need central banks and nations to regulate digital money or can we create a governance structure that is truly decentralised?

This will be the big debate of 2023 and forwards, after all of the failures of exchanges and currencies in the crypto world of 2022. It’s easy to call it a crypto winter but, for me, it was more like a crypto freeze. Terra-Luna, Three Arrows, Celsius, FTX, BlockFi and the list goes on.

It’s a year of reckoning.

The critical part here, however, is regulations. More than this, it is governance and government. Who governs cryptocurrencies? This has been a debate I’ve been engaged with since bitcoin arrived in 2009, and it still applies.

TBH, it’s hard to say. There are pros and cons on both sides. For example, if you have a national government with a central bank who authorise the operation of cryptocurrencies – such as El Salvador or the Central African Republic – then is that a good thing? It may well be. In these countries, bitcoin si recognised as legal tender by the government and seen as a positive thing. On the downside, after the crypto freeze crept in, maybe these governments are now asking themselves, as do we all, was this a good thing to do?

But then think about it with the boot on the other foot: does it matter to citizens? Whether the CFA Franc, the other currency of the Central African Republic, or the Salvadoran Peso are your preferred currencies, the point is two-fold: what do you believe has value and why?

Why do you believe the CFA Franc or Salvadoran Peso is worth anything? Because the government says so. Then you find the economy in a meltdown, like Zimbabwe was a few years ago, and you realise they’re worth nothing.

So, the government then tells you that the US dollar is what’s worth it. The US dollar. Is this the most stablecoin in the world? It certainly has been for the past few decades, which is why half of the US dollars issued are circulating as currencies overseas, but what happens if we stop believing in America?

Well, you can just as easily say believe in bitcoin. Btu there is a fundamental difference between the Franc, Peso and Dollar and bitcoin. The first three are backed by governments, regulations and licenses. bitcoin is not … but it could be.

According to Brad Garlinghouse, CEO of Ripple, the USA will follow Singapore, the European Union, Brazil and Japan with crypto legislation and regulations this year. 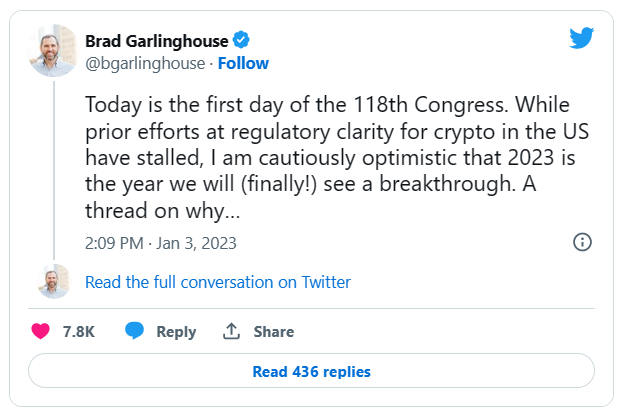 If true, then some crypto currencies become legal tender with legal backing and legal recognition. Without such legal recognition, then crypto remains in the wild and so, when the libertarians tell me they want their money back, I come back to my basic tenet: you cannot have money without government. Which government do you want on the network of money? I’m guessing, now, after the crypto winter freeze and collapse, you’ll be far happier having a government you recognise behind the money and not some flaky networked economy that seems more like a Ponzi scheme than a real economy.

Having said that, as Bloomberg points out, it is hard to imagine Satoshi Nakamoto or Vitalik Buterin working for Goldman Sachs or JPMorgan Chase. In a piece by Tyler Cowen, he asks:

What about crypto as a means of owning and trading one’s online data? Or as a means of affirming one’s online identity? How about lower-cost remittances made using crypto? Who has the knowledge to conclude that current attempts to build out DAOs — Decentralized Autonomous Organizations — are going to fail? The point is that no regulators or commentators have the knowledge to understand which of these projects is going to succeed or fail.

In other words, if I interpret these things personally, it is purely what the network believes that determines the governance. It is not the government of America, Europe, India, China or anywhere else. Let the people decide. But, equally, let the people cry if they decide to back the wrong horse.

Related: Just When You Think That Crypto Has Failed …