As I discussed in a Frank Talk last week, the Senate just approved a $1 trillion infrastructure bill that’s now the business of the House. Among the parts of the bill that I seriously hope lawmakers will consider amending is the part that creates new tax reporting requirements for the cryptocurrency industry.

Specifically, the bill would require crypto “brokers” to provide the names and addresses of their clients. At issue is the vague way in which the bill’s authors define a crypto broker, which would unintentionally include not just brokers such as Coinbase but also crypto miners, software developers and more. These types of companies do not keep track of who owns the Bitcoin, Ether or other cryptos they may have mined. Doing so, in fact, would be impossible.

This legislation is a prime example of what happens when lawmakers try to regulate something they don’t fully understand.

A video of Ted Cruz went viral on Reddit last week after the Texas senator made a full-throated defense of his amendment, which would strike all language related to cryptos from the bill. “There aren’t five senators within this body with any real understanding of how cryptocurrency operates,” Cruz said, and yet lawmakers were willing to “obliterate” this “new and exciting,” “fast moving” industry. We would be destroying billions of dollars in value and sending countless jobs overseas, he argued.

Cruz can be a polarizing figure, and I may not always agree with him or his methods, but here he’s 100% correct. I hope his words can convince House members to amend the bill’s language or remove it altogether.

That said, I believe most leaders in the crypto industry would invite some level of regulation, so long as it’s reasonable and drafted from a place of understanding.

You can watch Ted Cruz’s full speech by clicking here.

Both Bitcoin and Gold Are Money

It’s not just lawmakers who aren’t fully versed in Bitcoin, of course. I’ve received many questions over the past few days regarding the differences between the crypto and gold. With that in mind, below are six reasons why both Bitcoin and gold can be considered money. But whereas gold is the fear trade, Bitcoin is the greed trade.

Ideally, money should be able to withstand basic wear and tear, one of the main reasons why many currencies have historically been made of metal, shells and other hardy materials. A few years ago, I shared with you why we can single gold out among the 118 elements as the best possible candidate to be money. It’s chemically inert, for one, meaning it doesn’t rust or tarnish. You can bend it, break it and melt it down, but it’s virtually impossible to destroy. Since humans started mining the metal between 5,000 and 7,000 years ago, we’ve dug up close to 200,000 tonnes, nearly all of it still around in one form or another.

We can also call Bitcoin a durable asset, capable of withstanding the test of time. BTC exists only in digital space, on a highly encrypted, decentralized peer-to-peer network.

In order for money to be a convenient medium of exchange, it needs to be portable. This is why land, although inherently valuable and durable, cannot be considered money.

Granted, not every form of gold is “portable.” A bar of the stuff, for instance, weighs about 27.5 pounds, making it impractical to carry around with you during a shopping spree. Gold coins, on the other hand, can be carried in a pocket or purse. And remember that not too long ago, U.S. bank notes, which are light and can fit in a wallet, were fully backed by and convertible into gold.

BTC is extremely portable because, well, it has no physical form. So long as you have a smartphone with access to the internet, you can carry as many or as few bitcoins around with you.

As I write this, one bitcoin is valued at around $46,000. Fortunately for those who may not have that kind of cash on hand, BTC can be purchased in fractions. What’s more, the growing number of companies that accept BTC as a form of payment will provide change.

Gold maintains a reliable level of uniformity. Regardless of which country’s mint you might purchase a one-ounce gold coin from, it should have more or less the same value in markets all around the world.

It’s possible that, in the future, traders may be interested in paying a premium on bitcoins that were mined using only green energy, or on newly minted bitcoins that have no history of being used to launder money or finance illicit activities, but for now, one bitcoin equals one bitcoin.

Gold is attractive as money because its supply is limited. Indeed, we may very well have reached peak gold. Meanwhile, bank notes continue to be printed at a rapid rate, which has contributed to the higher-than-average inflation we’re witnessing right now.

Like gold, Bitcoin has a limited supply baked into it. Only 21 million coins will ever be mined. Supply growth is also restricted by halving events. After every 210,000 blocks are mined, the Bitcoin reward is cut in half. 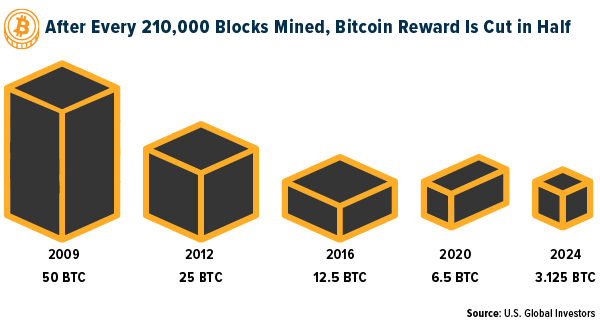 It’s difficult to call an asset money if not everyone agrees that it has value. Using this yardstick, gold is undeniably money. Nearly every central bank on earth holds the precious metal in its reserves, and some countries have used these holdings to pay down their debts.

Not all central banks are totally sold on Bitcoin, of course, and to date, only one country, El Salvador, has adopted Bitcoin as legal tender. Interestingly, that’s one more country than those that use gold as legal tender. Also consider that Bitcoin can be sent anywhere in the world, from peer to peer, and it will still have value.

Related: The Metaverse: What Every Early-Stage Investor Needs to Know