Bitcoin’s Use Case Strengthens As Canadian Bank Accounts Get Frozen

History has shown us that the more socialist a country is, the more authoritarian it risks becoming. If you’ve been following the events of the Canadian trucker convoy protests, and the Trudeau administration’s crackdown on demonstrators’ basic liberties, you know this to be true.

The protests, by the way, are against so much more than vaccine mandates. At a time when countries are dropping Covid restrictions, people in some parts of Canada, most notably Quebec, are still having to deal with nightly curfews, restrictions on where you can walk your dog and more. Fines have been handed out to those who assist the demonstrators in any way.

The prime minister has invoked emergency powers that allow him to “commandeer” banks and insurers. Despite the fact that peaceful protest is constitutionally protected in Canada’s Charter of Rights and Freedoms, two key protest organizers were arrested in the capital of Ottawa last week. GoFundMe fundraisers have been shut down and bank accounts have been frozen without a court order.

That leaves Bitcoin. Although Trudeau can’t prevent someone anywhere in the world from sending Bitcoin to protestors’ wallets, he’s made it more difficult for them to convert the digital assets into Canadian dollars.

As a native Torontonian, I’m saddened to see that the administration has resorted to treating citizens with real concerns and grievances in ways you’d expect to find in Venezuela, Cuba and other oppressive countries. And for what purpose? Canada already has one of the highest vaccination rates in the world. Like many others, I happen to believe that the vaccines are safe and effective, but in a free country, it should be left to individuals to decide what they put in their bodies. If there’s anything edifying about this, it’s that authoritarianism and capital controls can happen anywhere, even in common law jurisdictions. In the past, people used gold to escape oppressive regimes and sidestep errant governments—consider the daring story of the Vietnamese boat people, many of whom paid their way out of the country with gold after the fall of Saigon—and today we’re witnessing Bitcoin’s use case play out in real time. 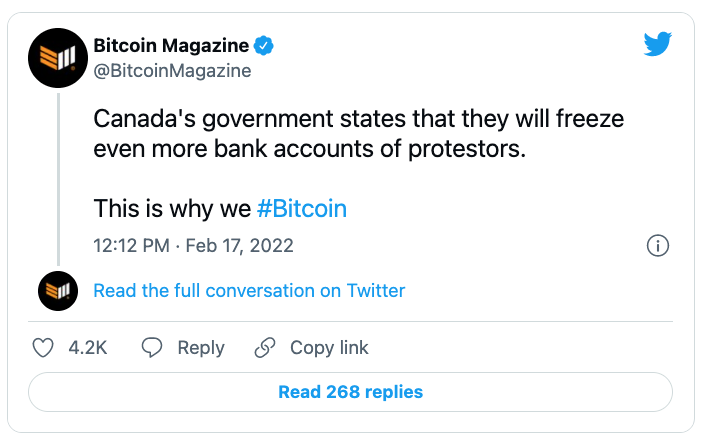 Many called (and continue to call) former U.S. president Barack Obama the “greatest gun salesman in America” due to his support of strict gun control measures. Similarly, I believe Justin Trudeau will be remembered as the greatest Bitcoin salesman in Canadian history.

As gold, silver and crypto investor Mark Jeftovic said in a recent blog post, “It’s never been riskier to NOT own Bitcoin.” Unlike fiat currency, the digital asset is decentralized and cannot be controlled by any central bank or politician, making it a powerful peer-to-peer payment network. Why else are some lawmakers and bureaucrats so eager to regulate or outright ban it?

Gold Just Broke Out On Geopolitical Risks And Recession Fears

Speaking of “classic” Bitcoin, gold had a constructive week on Russian-Ukraine tensions, which continue to heat up, and jitters over a possible upcoming recession. The yellow metal broke out of its narrow trading pattern as it climbed above $1,900 an ounce in intraday trading last week for the first time since June 2021. Tensions have ratcheted up as Putin has moved what he calls “peacekeeping” troops into Ukraine, but as I wrote in last week’s Frank Talk, I still believe an all-out war can be avoided. Should it happen, though—heaven forbid—you may expect to see the gold price surge and possibly test its all-time high of around $2,070.

There’s another reason why gold could be rallying right now, and that has to do with what the bond market is telling us. Going back to the 1950s, every time the two-year Treasury yield has exceeded the yield on the 10-year Treasury, a recession wasn’t far behind. The last time such an inversion occurred, briefly, was in August 2019, and we all know what happened the following year. Although there’s no way the pandemic could have been predicted, an economic pullback was highly probable. In any case, if you look at the chart above, you’ll see that the yield curve may be trying to invert once again. Last week the Bank of America, among other financial institutions, sounded the alarm bell, telling clients it expects an inversion to occur sometime this year as the Federal Reserve raises rates to slow inflation and, simultaneously, the U.S. economy. With inflation running at a scorching 7.5% over last year, Fed governors may be compelled to hike rates more aggressively than initially planned, which could potentially shock economic growth.

If you recall in an earlier Frank Talk, I showed you that gold has historically performed well following Fed tightening cycles, so now may be a good time to accumulate. I’ve always recommended a 10% weighting, with 5% in physical gold bullion and the other 5% in high-quality gold mining stocks and ETFs. A position in Bitcoin of around 2% may also be appropriate at this time.