Bitcoin Powers Past $57,000 on Its Quest to Hit a New All-Time High

Bitcoin powered past $57,000 on Monday for the first time since May as a number of positive crypto developments galvanized investors in the month of “Uptober.”

For one, legendary investor George Soros’s family office fund confirmed last week that it held Bitcoin in its nearly $6 billion portfolio. Speaking at a Bloomberg event, Soros Fund Management CEO and chief investment officer Dawn Fitzpatrick said that Bitcoin was more than an inflation hedge, having “crossed the chasm to mainstream.”

Indeed, there were an estimated 221 million people actively involved in the crypto ecosystem in June, according to Crypto.com. That’s more than twice the number of people who were trading and holding cryptos at the beginning of 2021, suggesting an exceptionally robust growth rate that’s far outpaced stock ownership. Also supporting cryptos was an assurance by Gary Gensler, head of the Securities and Exchange Commission (SEC), that his agency does not have the authority or intention to ban cryptocurrencies as China has done in recent weeks.

Gensler, who’s under fire from certain U.S. lawmakers for signaling an interest in regulating the industry, said last Tuesday that a crypto ban would be “up to Congress.” However, I believe this is just as unlikely, given that there are a number of staunch pro-Bitcoin members of Congress, including Sen. Cynthia Lummis (R-WY) and Rep. Warren Davidson (R-OH).

One of the most constructive bits of crypto news, as I see it, is Bank of America’s decision to introduce coverage of digital assets. In its maiden report last week, the second biggest U.S. bank said the $2 trillion crypto space is just “too large to ignore.”

Crypto strategist Alkesh Shah is particularly “bullish on the long-term prospects for the digital asset ecosystem as it enters the mainstream.” (There’s that word again!) “We anticipate significant growth as digital asset use cases move beyond Bitcoin’s store of value thesis to an industry characterized by product innovation, regulatory clarity, increased institutional participation and mainstream adoption.”

Bank of America also spends time discussing non-Bitcoin coins (altcoins), writing that digital assets that can “enable a platform to be built, like the Apple iPhone did for applications, are gaining the most value.”

The biggest altcoin is Ether with a current market cap of $427.7 billion, and it’s up 392% for the year. I’m pleased to share with you that HIVE Blockchain Technologies mines both Bitcoin and Ether, which helped it generate a record $37.24 million in revenue during the quarter ended June 30. That’s the highest revenue of any publicly traded crypto miner, and what’s more, HIVE appears the most attractive on a relative basis when looking at market cap-to-revenue. Of the assets shown above, Bitcoin was also the best performer for the year as of last Friday. The digital currency was up more than 84%, followed by Alphabet (+62%), Microsoft (+36%) and Facebook (+23%).

2021 has been a challenging year for the two precious metals, gold and silver, with the former down 9.5% as of Friday, the latter down around 16.5%.

Much of this price action is due to institutional investors’ evolving preference for Bitcoin, if JPMorgan’s analysis is any indication. In a report last week, the bank said it believes big investors “appear to be returning to Bitcoin, perhaps seeing it as a better inflation hedge than gold.” JPMorgan adds that the success of the Lightning Network, which allows nearly instantaneous crypto transactions, and El Salvador’s adoption of Bitcoin as legal tender have helped convince investors that the digital currency can scale up to meet institutional demand.

Speaking of gold miners… A recent chart by “Bear Traps Report” founder Lawrence McDonald shows that the number of companies in an NYSE Arca Gold Miners ETF that are trading above their 200-day moving averages is coming off recent lows. As McDonald points out, “Historically this has led to strong returns in the following six months.”

In other words, this may be an opportune time to get exposure. 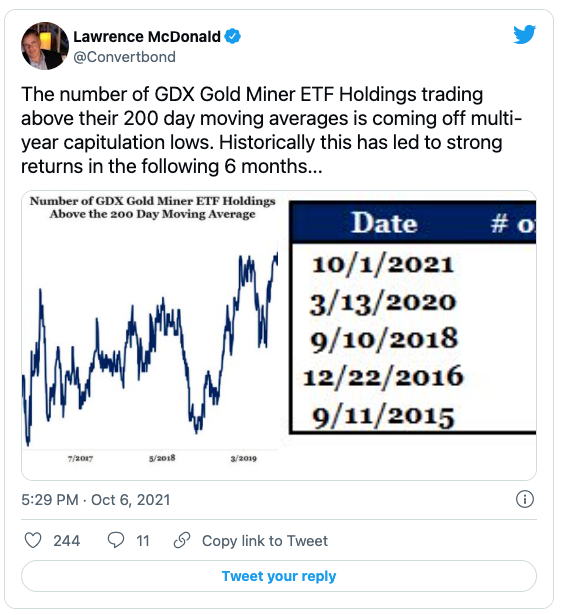 Having come across this, I was curious to see which gold mining companies had the strongest cash positions right now. Specifically, I looked at free cash flow (FCF) yield, which tells you how well a company can meet its financial obligations, pay down debt and potentially raise its dividend. You can calculate the yield by dividing a company’s per-share FCF by its market cap. I like to see a number above 7% or 8%.

The results are below. For comparison’s sake, I also included the FCF yield for the gold mining index as well as the S&P 500. As you can see, there are quite a few companies that have very strong cash positions at a time when investor sentiment for gold miners is very low. Again, when sentiment has been this low, returns have historically been attractive six months later. The companies above, I think, would be a good place for investors to start hunting for opportunities in anticipation of the next bull run. We invest in several of the names here at U.S. Global Investors.

If you’re familiar with crypto miners, you know that they HODL (“hold on for dear life”) most of the coins they produce. I wish more gold miners did this. Of the miners featured above, the only one I’m aware of that HODLs its gold is Gran Colombia. HODLing their metal would help them appeal to more millennial investors.