Will Powell Decouple Gold from the Stock Market?

This week, Powell gave a long television interview and a testimony to the Senate. What groundbreaking did he say, and what do his remarks imply for the gold market?

Powell dominated media news this week. On Sunday, the Fed Chair gave an interview to CBS news magazine “60 Minutes,” while on Tuesday, he testified before Congress. What did he say? In an interview, Powell tried to persuade viewers that the Fed has not exhausted its powers to help the economy: “we’re not out of ammunition by a long shot (…) So there’s a lot more we can do to support the economy, and we’re committed to doing everything we can as long as we need to”. But are you really so powerful, if you need convince others that you are powerful?

He also reiterated his bearish views from the recent speech to the Peterson Institute for International Economics on the US economic growth in 2020, in which he said that in the second quarter, the GDP could drop by 20-30 percent on an annualized basis, while the unemployment rate could soar to 20-25 percent. Although the GDP will start to recover in the third quarter, it will take some time to pick up steam and the economy won’t get back to where it was before the outbreak of pandemic by the end of this year.

Powell also said that the Congress should spend more money to prevent mass bankruptcies and that it is not the time to worry about the long-term consequences of the rising Fed’s balance sheet and federal debt. So, investors could be prepared for even more interventions from the Fed and Treasury. New lending and spending programs should support gold prices, as the precious metals investors – contrary to bureaucrats and policymakers – really do think about long-term effects. After all, all crises leave scars and the coronavirus crisis will be no exception.

In his testimony before the Senate Banking Committee, Powell basically reiterated what he said earlier. First of all, he assured that the Fed could do much more. He said: “We are committed to using our full range of tools to support the economy in this challenging time even as we recognize that these actions are only a part of a broader public-sector response”.

So, Powell does not expect – and we neither – the V-shaped recovery. Actually, Powell said that some sectors of the economy will recover only after the emergence of the vaccine! This is also what we said several times: only vaccine will fully restore the confidence among households, entrepreneurs and investors and without such confidence the recovery of the US economy will not be vivid. The lack of vigorous rebound creates a downside risk for the global stock markets, but it’s rather positive for the gold market.

So far, we claimed that U-shaped recovery (or even L-shaped in some sectors) is more likely. However, there might be also a W-shaped path, a stop-go economy, where the economy swings between contraction and growth, between lockdowns and re-openings, depending on the number of new infections. Such manic-depressive economy should be positive for the gold prices, perhaps even more than the U-shaped recovery, as there is much more uncertainty in the former scenario.

Importantly, Powell’s cautious remarks and worries about the U-shaped or W-shaped recovery could cool stock markets bulls. Over the last few days, we have seen a possible  decoupling of the tandem upside moves in gold and equities, as the chart below shows. 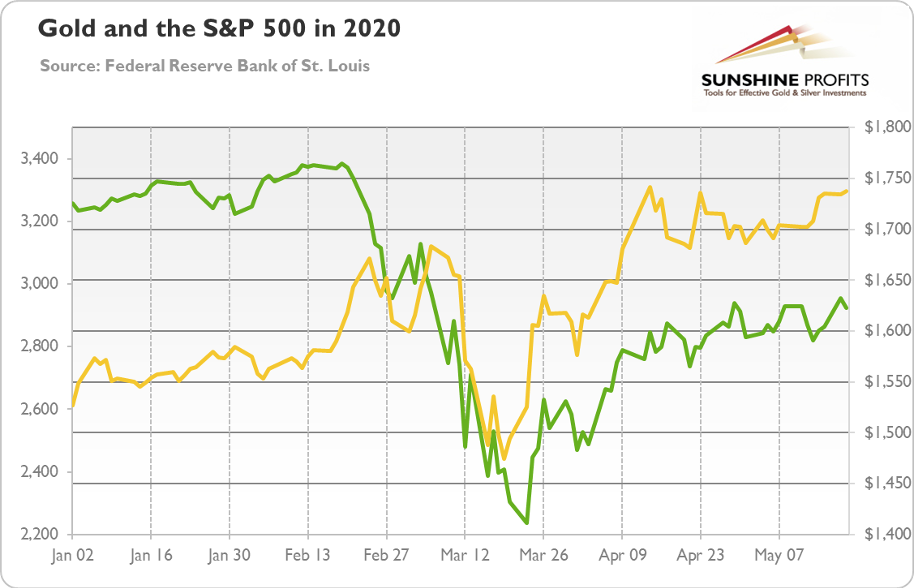 The price of gold went further up, while the S&P 500 Index came under pressure and seemingly started trading sideways. It is, of course, yet to be seen, whether the real decoupling will actually occur, but there are no doubts that in case it does, it could be a big (positive) change for the gold market.