Will Euro and Gold Go Up With Pandemic Upturn in Euro Area?

The worst may already be behind the euro area’s economy. This bodes well – both the euro, as well as gold, can benefit from it.

The Governing Council of the European Central Bank met last week, keeping its monetary policy unchanged. The inaction was widely expected - no surprises here. The June meeting could be much more interesting as the ECB will have to decide whether or not to slow its bond buying under the Pandemic Emergency Purchase Programme that was accelerated in the second quarter of the year. Given the dovish stance of the European policymakers, and the bank’s pledge to provide the markets with favorable financing conditions during the pandemic, we shouldn’t expect any tapering soon.

Certainly, there are important dovish parts of the latest ECB’s statement on its monetary policy . It stems from the grim economic situation in the euro area. The real GDP declined by 0.7 per cent in the fourth quarter of 2020, and it is expected to decrease again in the first quarter of 2021. The nearest future doesn’t look promising:

The near-term economic outlook remains clouded by uncertainty about the resurgence of the pandemic and the roll-out of vaccination campaigns. Persistently high rates of coronavirus (COVID-19) infection and the associated extension and tightening of containment measures continue to constrain economic activity in the short term.

However, investors should always look beyond the near-team outlook. In the medium-term, the situation in the euro area looks much better. As the ECB notes, this is because the current virus wave seems to have peaked in Europe, while the pace of vaccination is accelerating:

Looking ahead, the progress with vaccination campaigns, which should allow for a gradual relaxation of containment measures, should pave the way for a firm rebound in economic activity in the course of 2021.

All these factors are positive for the euro and, thus, also for the price of gold. As you can see in the chart below, gold was highly correlated with the spread between the American and German long-term government bond yields - the widening divergence in the US and European interest rates that started in August 2020 pushed the yellow metal down. 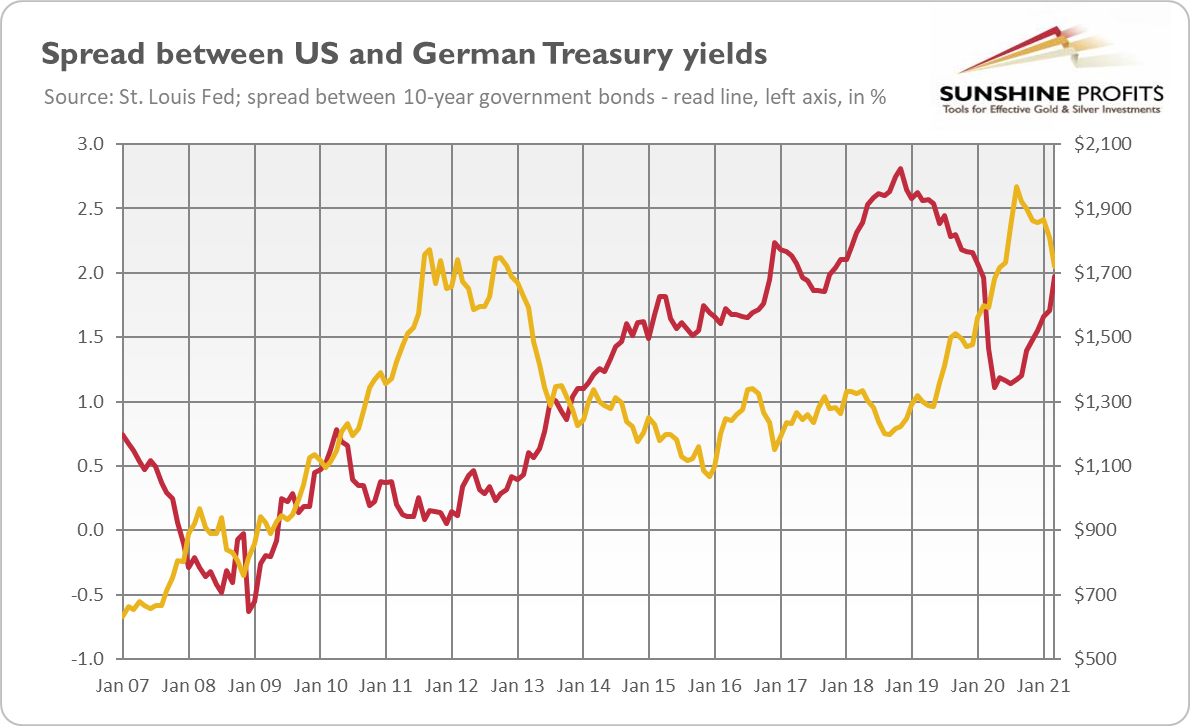 The third wave of pandemic has already peaked in Europe; therefore, the old continent may somewhat catch up with the US. This could narrow the divergence in yields, creating downward pressure on the greenback while supporting the gold prices .

Another positive factor for the euro and the yellow metal is the fact that although inflation jumped in both the US and the euro area, it’s much higher in the former country as the chart below shows. So, the purchasing power parity could support the common currency, as well as gold, against the greenback. 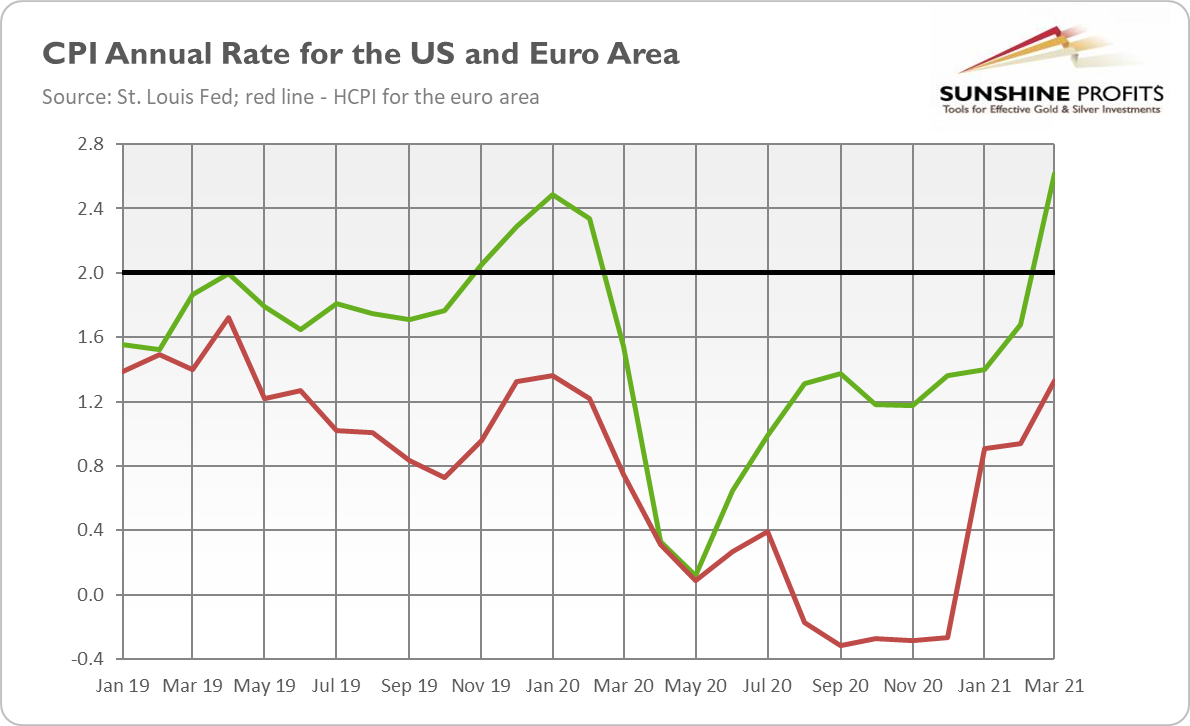 Of course, it might be the case that inflation won’t materialize, just like it never did after the Great Recession . But this time may be really different due to the surge in the broad money supply and a huge increase in government spending in the form of direct cash transfers to citizens who are hungry for traveling, eating in restaurants, and generally a normal life with all its money-spending. So, inflation is the wild card, which makes it reasonable to have some gold in investment portfolios . Investors should remember that gold is an investor’s asset rather than a demand asset, which means that in periods of reflation , gold initially lags commodities, only to outperform them and shine brightly in later phases.