Here’s What’s Eating Away at Gold

Gold is dodging bullets, as it comes increasingly under fire from rising U.S. interest rates and a USD that is poised to surge.

Catching unsuspecting traders in yet another bull trap , gold’s early-week strength quickly faded. And with investors unwilling to vouch for the yellow metal for more than a few days, the rush-to-exit mentality highlights a short-term vexation that’s unlikely to subside.

Destined for devaluation after hitting its triangle-vertex-based reversal point (which I warned about previously ), the yellow metal is struggling to climb the ever-growing wall of worry.

Mirroring what we saw at the beginning of the New Year, gold’s triangle-vertex-based reversal point remains a reliable indicator of trend exhaustion.

And when you add the bearish cocktail of rising U.S. interest rates and a potential USD Index surge, $1,700 remains the initial downside target , with $1,500 to even ~$1,350 still possibilities under the right curcumstances. 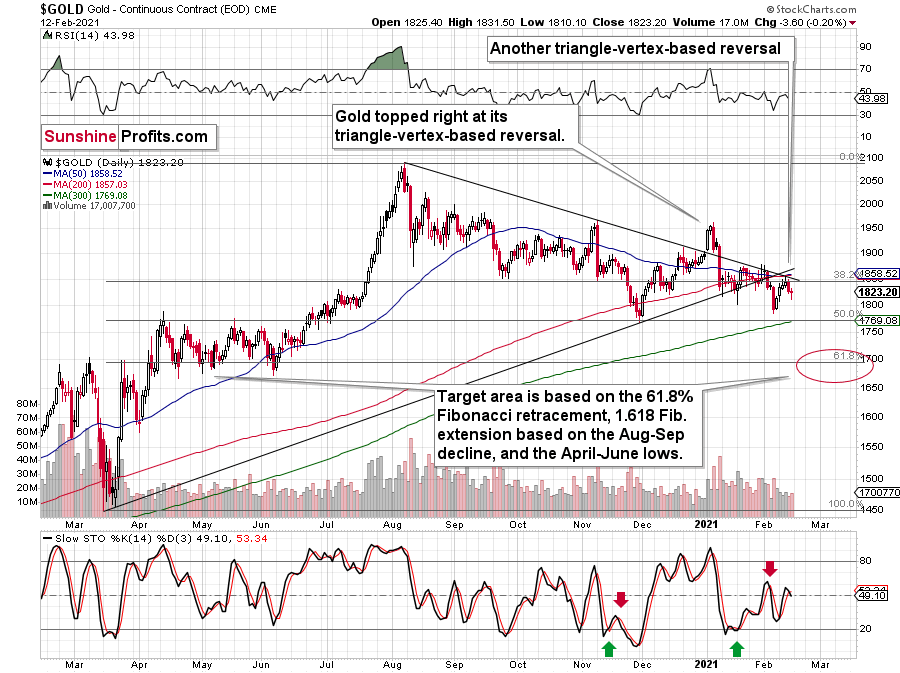 To explain the rationale, I wrote previously:

This means that if the shape of the price moves continues to be similar, the next short-term move lower could be bigger than what we saw so far in January and bigger than the decline that we saw in the second half of November. This is yet another factor that points to the proximity of $1,700 as the next downside target.

In addition, as a steepening U.S. yield curve enters the equation, I wrote on Jan. 27 that the bottom, and subsequent move higher, in U.S. Treasury yields coincided with a USDX rally 80% of the time since 2003.

And while the USDX continues to fight historical precedent, on Feb. 12, the U.S. 30-Year Treasury yield closed at its highest level in nearly a year. As such, the move should add wind to the USDX’s sails in the coming weeks.

In conclusion, gold is under fire from all angles and dodging bullets has become a near impossible task. With the USD Index likely to bounce off its declining resistance line (now support), a bottom in the greenback could be imminent. Also ominous, a steepening U.S. yield curve signals that the yellow metals’ best days are likely in the rearview. However, as the situation evolves and gold eventually demonstrates continued strength versus the USD Index, its long-term uptrend will resume once again.

Before moving on, I want to reiterate my previous comments and explain why $1,700 remains my initial target:

One of the reasons is the 61.8% Fibonacci retracement based on the recent 2020 rally, and the other is the 1.618 extension of the initial decline. However, there are also more long-term-oriented indications that gold is about to move to $1,700 or lower.

(…) gold recently failed to move above its previous long-term (2011) high. Since history tends to repeat itself, it’s only natural to expect gold to behave as it did during its previous attempt to break above its major long-term high.

And the only similar case is from late 1978 when gold rallied above the previous 1974 high. Let’s take a look at the chart below for details (courtesy of chartsrus.com) 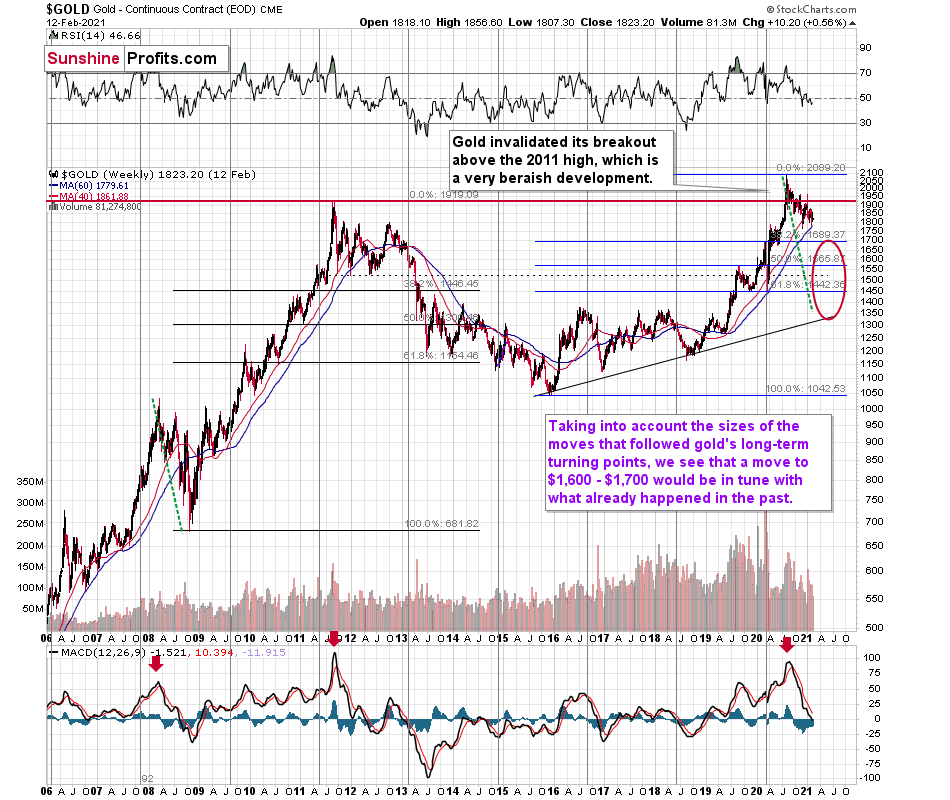 If you analyze the red arrow in the lower part of the above chart (the weekly MACD sell signal), today’s pattern is similar not only to what we saw in 2011, but also to what we witnessed in 2008. Thus, if similar events unfold – with the S&P 500 falling and the USD Index rising (both seem likely for the following months, even if these moves don’t start right away) – the yellow metal could plunge to below $1,350 or so. The green dashed line shows what would happen gold price, if it was not decline as much as it did in 2008.

Related: What Happens To Gold During the Pandemic Winter?