What are Non-Fungible Tokens (NFTs)?

Watching the mainstream news show the other day, it finished with an item about NFTs, non-fungible tokens.

It’s not the sort of thing that I would have expected most pensioners sitting having their night-time cup of cocoa watching the news would expect to see or hear about, but hey, I’m not a news programmer. Then I realised that the reason it’s being covered on the mainstream news is because of the money, particularly the money related to digital art.

Musician Grimes has sold several pieces of digital artwork at auction, raising a total of $6m – and their new “owners” do not own the work itself, meaning it can still be seen and shared online. Grimes is one of several artists using NFT (non-fungible token) technology to sell art. But the art in question does not have a physical presence the same way a painting or sculpture does. Instead, the token represents ownership – but not the work itself. The token is recorded on a digital ledger, and can be re-sold. The artwork can go up or down in value, but the owner of the token never possesses the original digital file.

The NFT is perhaps best described as a sort of digital certificate of authenticity, and for some it’s become a desirable collectible. Last month an NFT of the 10-year-old meme Nyan Cat sold for $580,000, and a video clip of basketball player Lebron Jones went for $100,000. NFTs exists on the blockchain – the same technology that underpins cryptocurrencies including Bitcoin – and that is how transactions are logged.

The BBC article also mentions the digital artist Beeple, whose work has just sold for a record $69 million and then there’s the Kings of Leon selling their music as an NFT. There’s even Jack Dorsey selling his first tweet as an NFT for $2.5 million (last time I looked). Oh, and then there’s this:

An anonymous guild of “art digitalists” buy an original Bansky and then set it ablaze—but not before digitizing the work into a non-fungible token (NFT).

A nice little primer as to what NFTs are all about is given in this video: 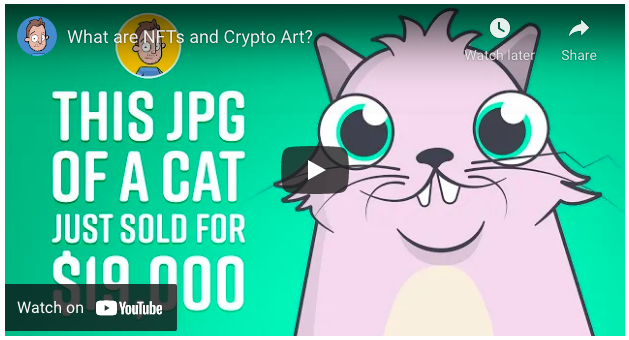 But, if you can’t play the video for some reason, here’s my primer.

In November 2008, an anonymous person eponymously called Satoshi Nakamoto released a white paper about a thing called bitcoin. bitcoin has two aspects: one is a currency that can be traded in a decentralised form without intermediaries such as financial institutions; the second is a technology that can record transactions with certainty and trust.

The former has become a fear of financial institutions, governments and regulators – it’s illegal, used by criminals, unregulated, you will lose your money, a scam, a Ponzi scheme, avoid, avoid, avoid. The latter became a technology that everyone loves but has found difficult to implement. I blogged about that in 2015 and it still holds true that the use cases for blockchain are more related to complex agreements between multiple counterparties than a simple use for one thing.

However, blockchain technology has always been clearly relevant for provenance, as demonstrated by one of the first companies to adopt this use case, Everledger, valued at over $100 million last time I looked and used to track the provenance of diamonds and fine wines.

This provenance use case is what is driving the rise of NFTs, particularly for digital art.

Digital art, by its very nature, is hard to own. Once it’s on the network, anyone can copy and share it. By way of example, here’s the Bitcoin Angel: 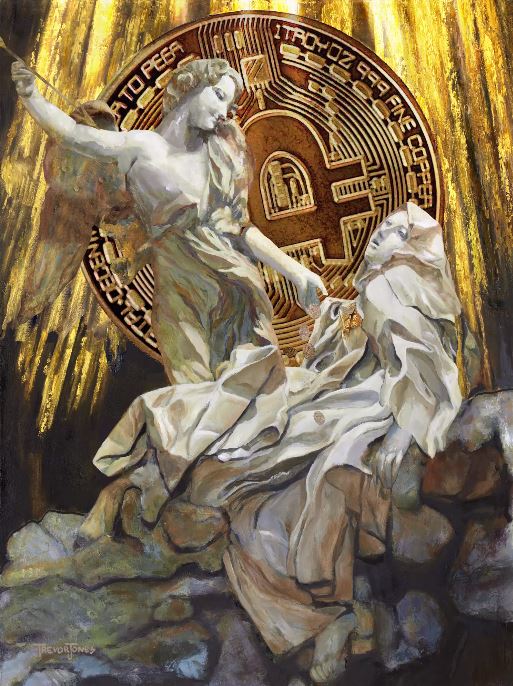 It’s a work of art by Trevor Jones that you can buy using a cryptowallet. You get a stake in the artwork, but anyone can cut and paste and view it, as I have above.

However, to give it the proper definition:

Fungibility is the ability of a good or asset to be interchanged with other individual goods or assets of the same type. Fungible assets simplify the exchange and trade processes, as fungibility implies equal value between the assets.

Therefore, if these are non-fungible tokens, they cannot be swapped with something else. They are unique and show who is the real, true owner of the asset. That’s why NFTs are a really important development, as it can track and trace who is the owner of the digital art but, equally, it could be the owner of physical assets like diamonds or fine wine.

This is the first time I’ve seen blockchain being discussed in the mainstream news with a direct use case, and would say that this, in its own right, makes it a pretty exciting landmark moment. Wouldn’t you?

Related: The Investment Case for Bitcoin