The window of opportunity for the stock bears is slowly but surely closing down as Friday‘s gentle intraday peek higher turned into a buying spree before the closing bell. The sentiment readings and put/call ratio are at the greed, euphoric and compacent end of the spectrum again.

I asked on Friday:

(…) How long can it last, and what shape the upcoming correction would have? Right now, the warning signs are mounting, yet the bears shouldn‘t put all their eggs into the correction basket really, for it shapes to be a shallow one – one in time, rather than in price.

Today, I‘ll say that waiting for a correction is like waiting for Godot. Trust me, I have come to experience quite some absurd and Kafkaesque drama not too long ago. What an understatement.

One week ago, I called the dollar as making a local top, and look where we are in the process. Coupled with the steepening pace of rising long-dated Treasury yields, that‘s a great environment for financials (XLF ETF) as they benefit from the widening yield curve.

Gold remains a drag on the precious metals performance, with silver and platinum flying. The miners‘ outlook and internal dynamics between various mining indices, provides a much needed proof to those short on patience. Little wonder, after 5+ months of downside correction whose target I called on Aug 07 in the article S&P 500 Bulls Meet Non-Farm Payrolls. Little wonder given the monstrous pace of new money creation beating quite a few prior interventions combined.

Yet, the precious metals complex is coming back to life as the economic recovery goes on, and will get new stimulus fuel. Commodity prices are rising steeply across the board, yet inflation as measured by CPI, will have to wait for the job market to start feeling the heat, which it obviously doesn‘t in the current pace of job creation and low participation rate.

Until labor gets more powerful in the price discovery mechanism (through market-based dynamics!), the raging inflationary fire will be under control, manifesting only in (financial) asset price inflation. That‘s precisely what you would expect when new money is no longer sitting on banks‘ balance sheets, but flowing into the economy.

(…) One more note concerning the markets – in our print-and-spend-happy world, where the give or take $1.9T stimulus will sooner or later come in one way or another, we better prepare on repricing downside risk in the precious metals, and also better not to fixate on the premature bubble pop talk too closely. I have been stating repeatedly that things have to get really ridiculous first, and this just doesn‘t qualify yet in my view. All those serious correction calls have to wait – in tech and elsewhere, for we‘re going higher overall – like it or not. 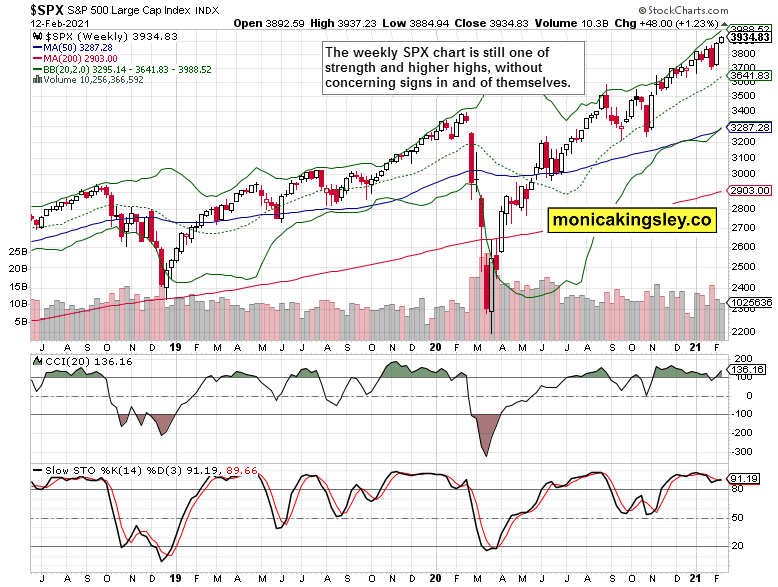 The weekly S&P 500 chart is still one of strength, without a top in sight. And the lower volume, I don‘t view as concerning at all. 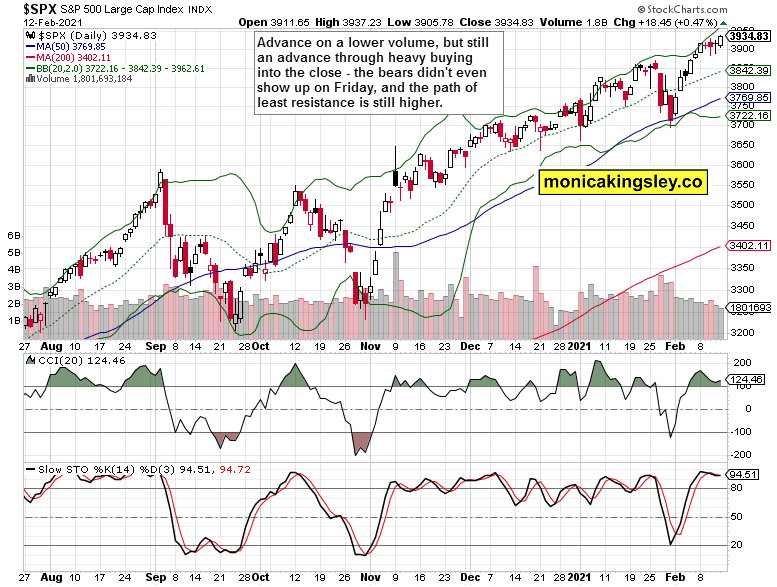 After a three day sideways consolidation, stock bulls forced a close higher on Friday. Low volume, but still higher prices. The bears missed an opportunity to act, having hesitated for quite a few days.  Not that the (big picture) path of least resistance weren‘t higher before that, though. 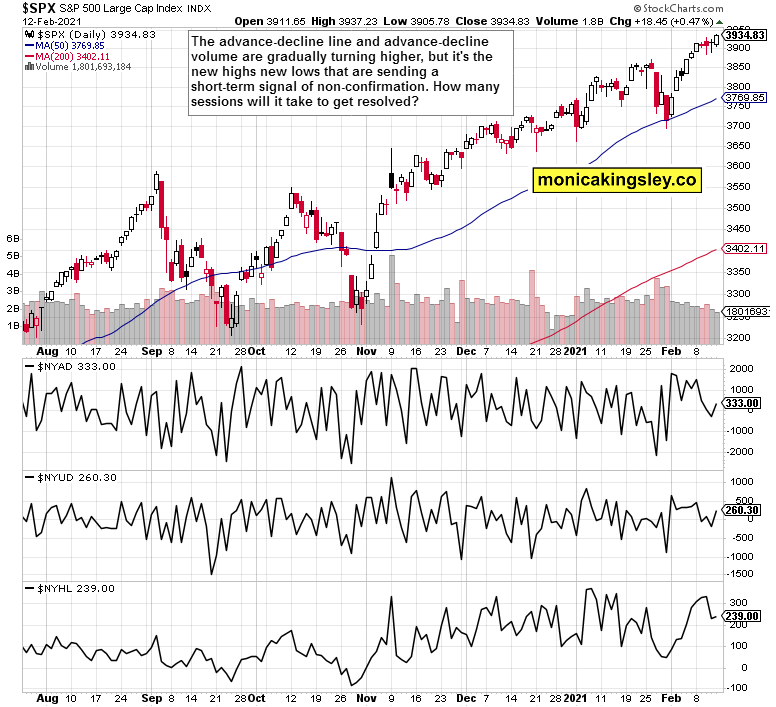 The market breadth indicators got a boost on Friday, but it‘s especially the new highs new lows that have a way to go. One would expect a bigger uptick given Friday‘s price advance, but the overall message is still one of cautious but well grounded optimism. 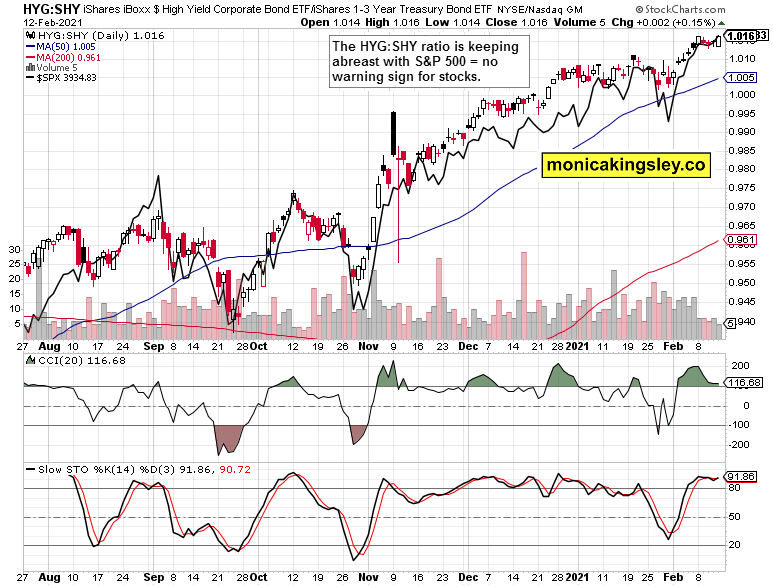 The high yield corporate bonds to short-term Treasuries (HYG:SHY) ratio performance is lining up nicely with the S&P 500 one, and definitely isn‘t flashing a warning sign for the days to come. 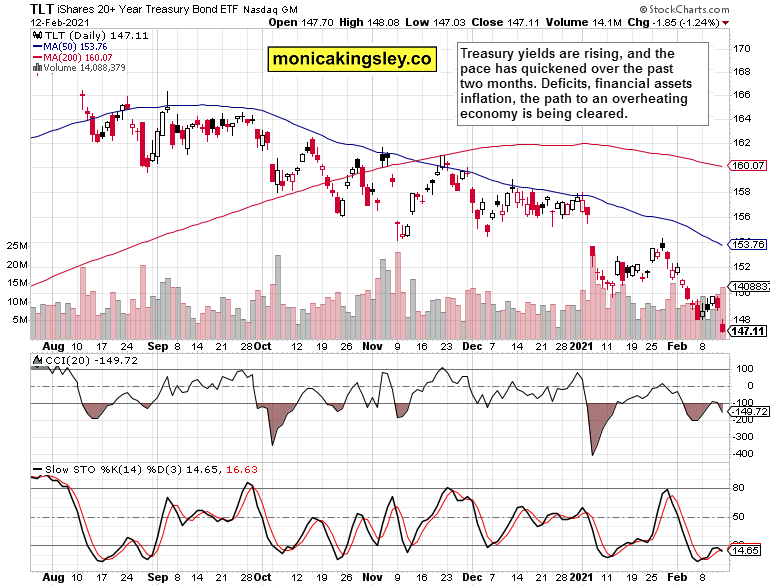 Long-term Treasuries are declining at a faster pace than has been the case in late 2020, which is (not immediately right now, but give it time and it‘ll turn out to be) concerning. Thus far though, the money flows are positive for the stock (and other risk on) markets as the liquidity tide keeps hitting the tape. 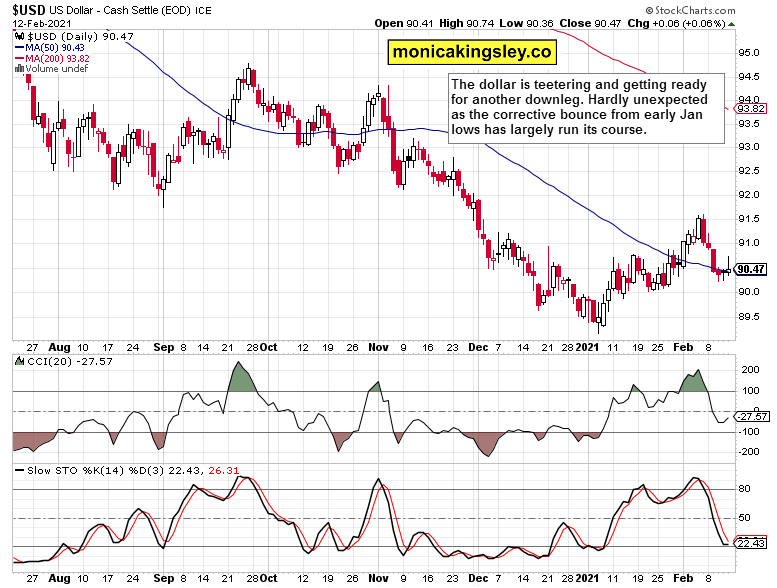 Who suffers? The dollar. No, it‘s not breaking higher (retracing breakout before a run higher – no) above the 50-day moving average or any way you draw a declining resistance line on higher time frames. The greenback is getting ready for another powerful downleg. 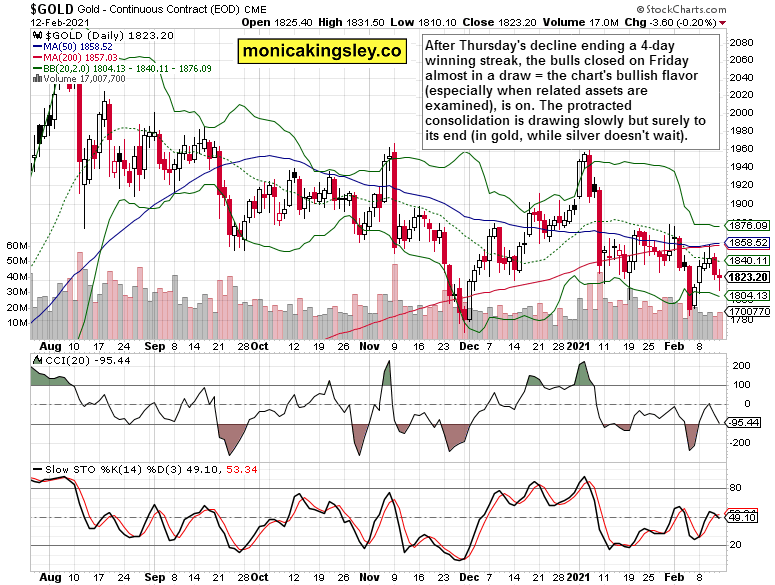 Gold bulls have repelled another selling wave, which was however not the strongest one. The fact there was one in the first place even, is more (short-term) concerning for the gold bulls. But please remember that it was first gold that got it right in jumping higher on the unprecedented money printing spree as we entered spring 2020, followed by copper, base metals, agricultural commodities, and also oil now (remember my recent bullish calls for over $80 per barrel in less than 2 years).

Gold keeps catching breath, frustrating the bulls who „know“ it can only go higher, but its spark isn‘t there at the moment. A perfect example is Monday‘s session thus far – spot gold 0.25% down, spot silver 1.25% up. It‘s been only on Friday when I touted the gold-silver spread trade idea as not having exhausted its potential yet, not by a long shot:

(…) For those inclined so, I am raising the arbitrage trade possibility. Long silver, short gold would be consistent with my prior assessment of the gold-silver ratio going down. Similarly to bullish gold bets, that‘s a longer-term trade, which however wouldn‘t likely take much patience to unfold and stick. 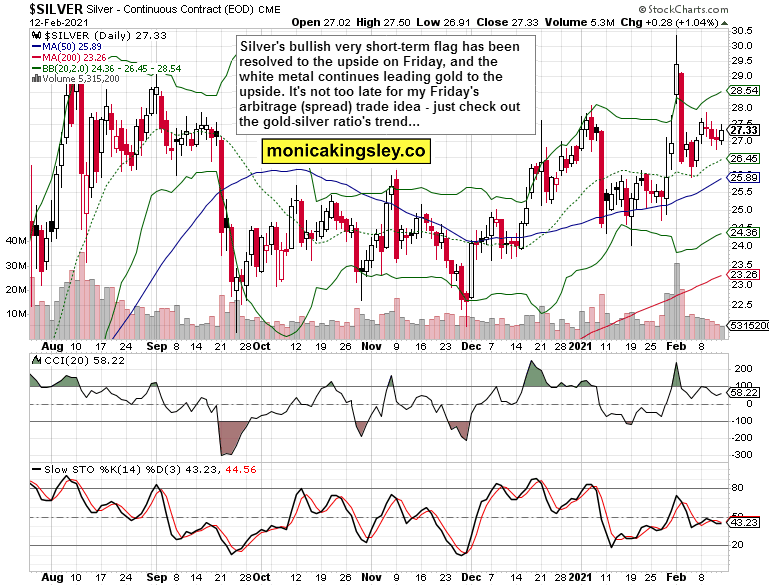 Silver keeps acting in a bullish way, tracking commodities ($CRB) performance much better than gold does at the moment. While both are a bullish play with the many factors arrayed behind their upcoming rise, it‘s silver that will reap the greatest rewards – today and in the days and weeks ahead. 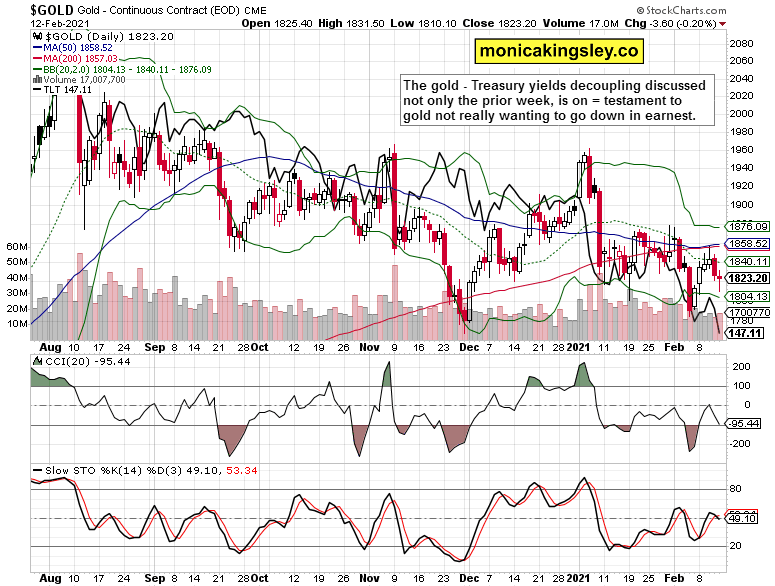 Back to the beaten down and underperforming gold. See that the yellow metal still isn‘t following the rising yields all that closely these days. Decoupling from the Treasury yields bodes well for precious metals universally, and it‘s precisely what you would expect given the (commodity) inflation, twin deficits biting, and the dollar balancing on the brink.

The miners examination also proves no change in the underlying bullish dynamic that is largely playing out below the surface. We‘re seeing the continued outperformance of junior gold miners vs. the seniors, and also the great burst of life in the silver miners – these are outperforming ever more visibly the rest of the mining companies.

This is a long awaited chart to flip bullish. Thus far, we have had one recent bullish divergence only (the GDX refusal to break to new lows when gold broke below its Jan lows) – once gold miners start leading the yellow metal, the sentiment in the precious metals community would get different compared to today really.

The deterioration in stock market got postponed with the latter half of Friday bringing in fresh buying pressure. Would the bears appear, at least to rock the boat a little? They had a good chance all the prior week, but didn‘t jump at the opportunity. Their window is closing, slowly but surely. The stock bull run is on, and there are no signals thus far pointing to an onset of a deeper correction soon.

The gold bulls continue lagging behind their silver counterparts, predictably. That‘s the objective assessment regardless of unprecendented monetary and fiscal policies, unfolding real economy recovery, inflation cascading through the system, and the dollar struggling to keep its head above water. The new upleg keeps knocking on the door, and patience will be richly rewarded (unless you took me up on the gold-silver arbitrage trade, and are popping the champagne already).

Related: S&P 500 Correction Looming, Just as in Gold or Not?