IMF’s economic outlook for 2020 is less grim, but the more distant future is more worrisome. Therefore, the precious metals index is expected to rise.

October’s edition of the IMF’s World Economic Outlook Report is out! The main message that the report conveys is that the IMF now predicts a less severe global contraction than in 2020 but a slower recovery in 2021 . The global economy is projected to plunge 4.4 percent this year and rise 5.2 percent in the subsequent year, contrary to the -5.2 and 5.4 percent changes forecasted in June.

Unfortunately, the prospects for emerging countries, excluding China, have worsened, and the economic decline for 2020 is projected to be greater than previously estimated. As a result, the pandemic will reverse the progress made since the 1990s in reducing global poverty.

When it comes to the US economy, it is forecasted to contract by 4.3 percent this year before growing at 3.1 percent in 2021, compared to -8 percent and 4.5 percent seen a few months ago. However, the reasons for the celebration are limited, as these projections could be revised down soon.

You see, the problem is that the second wave of the coronavirus cases (see the chart below) is hurting the employment rate again. 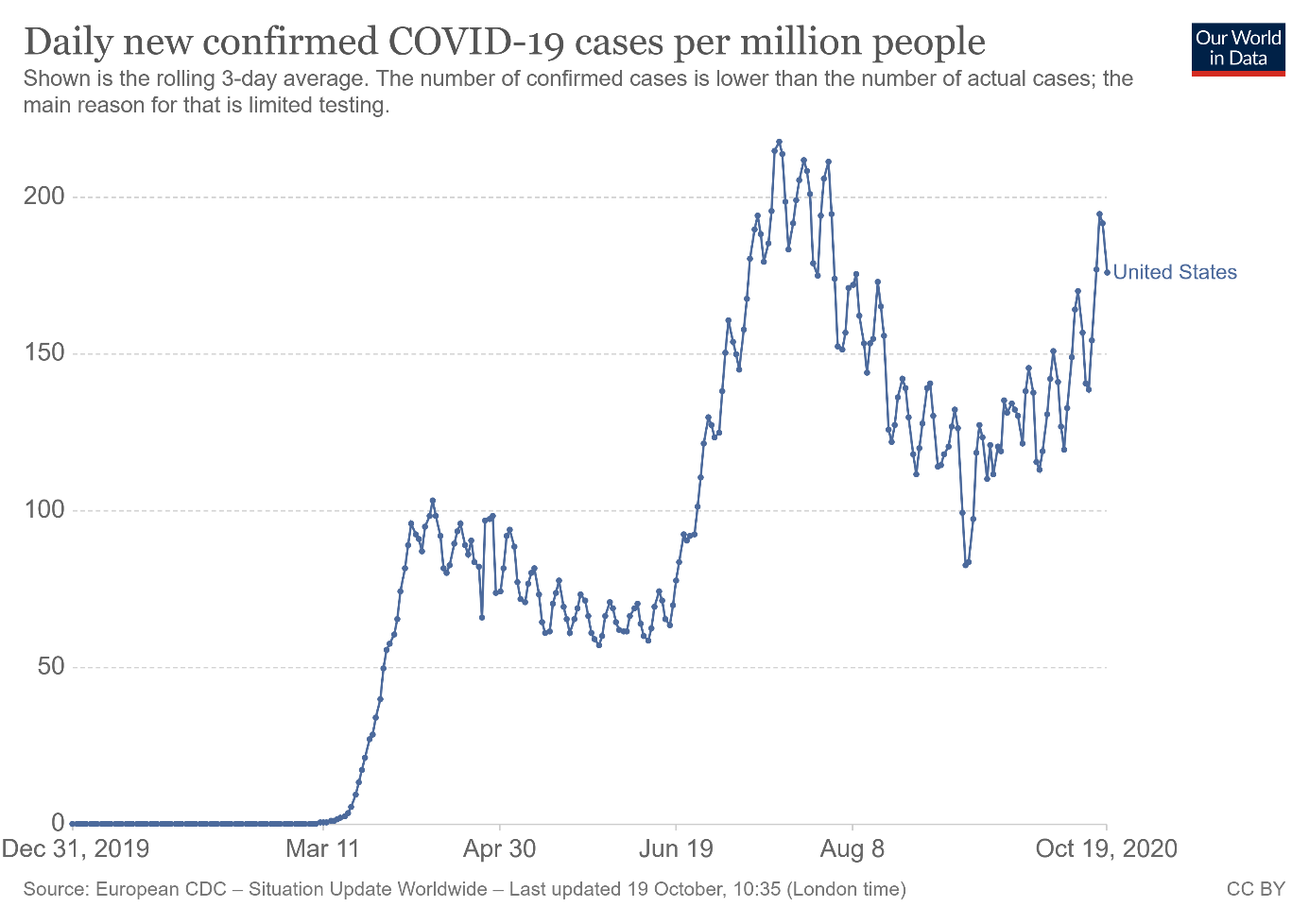 As the chart below points out, the number of Americans who applied for unemployment benefits has recently risen to the highest level over the last few weeks. 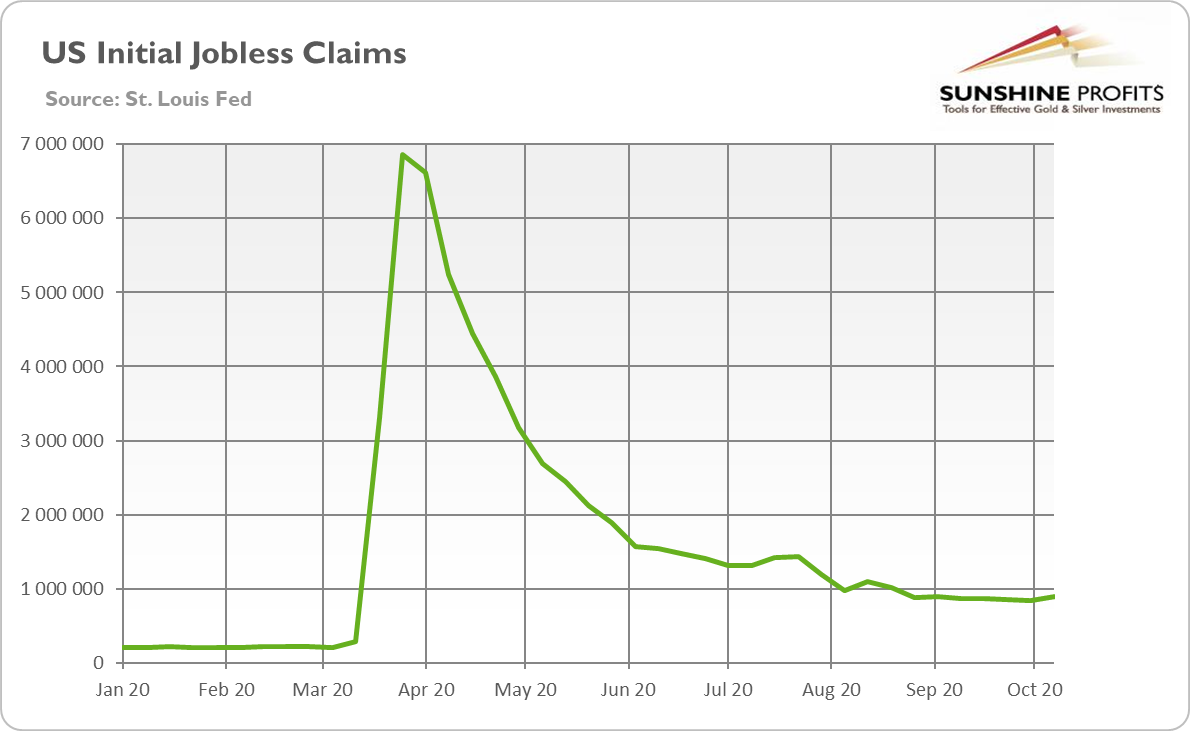 Even though the IMF’s near-term projection improved, another issue is that the baseline forecast envisages growth to slow down into the medium term , as the deep downturn this year will harm the supply potential. It means that the US will only modestly progress toward the 2020–25 path of economic activity projected before the epidemic .

Most importantly, the subdued outlook for medium-term growth comes with a significant projected increase in public debt stock. What is worrying is that the reduced potential output also implies a smaller mid-term tax base than previously anticipated, making repaying debts even more difficult.

Indeed, debt is an increasingly pressing problem all over the world, including the US. As a matter of fact, according to the IMF’s Fiscal Monitor , the debt-to-GDP ratio will stabilize next year everywhere but China and the US:

In 2020, government deficits are set to surge by an average of 9 percent of GDP, and global public debt is projected to approach 100 percent of GDP, a record high. Under the baseline assumptions of a healthy rebound in economic activity and low, stable interest rates, the global public debt ratio is expected to stabilize in 2021, on average, except in China and the United States.

However, public debt is not the only big problem in the US. Corporate indebtedness is also a worrying issue . In response to the coronavirus crisis, firms have also taken on more debt to cope with the reduced income and cash shortages, adding to the already high debt levels. Therefore, if the recovery is delayed, “liquidity pressures may morph into insolvencies,” according to the IMF’s Global Financial Stability Report . So far, the policy support limited the scale of bankruptcies. Still, the economists from the Bank of International Settlements predict that bankruptcies in advanced economies could rise from the baseline in 2019 by around 20 percent in 2021.

What does all the above mean for the gold market? Well, the improved near-term outlook for the US economy is not good news for the yellow metal. However, the slower expected growth in 2021 and beyond is becoming more positive. Notably, “the global economy’s long ascent back to pre-pandemic levels of activity remains prone to setbacks”. In other words, the uncertainties persist, which should support the safe-haven demand for gold as a result .

It is perhaps why the IMF expects that the precious metals index will increase by 28.4 percent in 2020 and by an additional 10.4 percent in 2021 amid the elevated risks and dovish monetary policy .

The growing coronavirus cases, subsequent worries about the already fragile recovery, US presidential election uncertainty have recently pushed gold prices above $1,900, as one can see in the chart below. 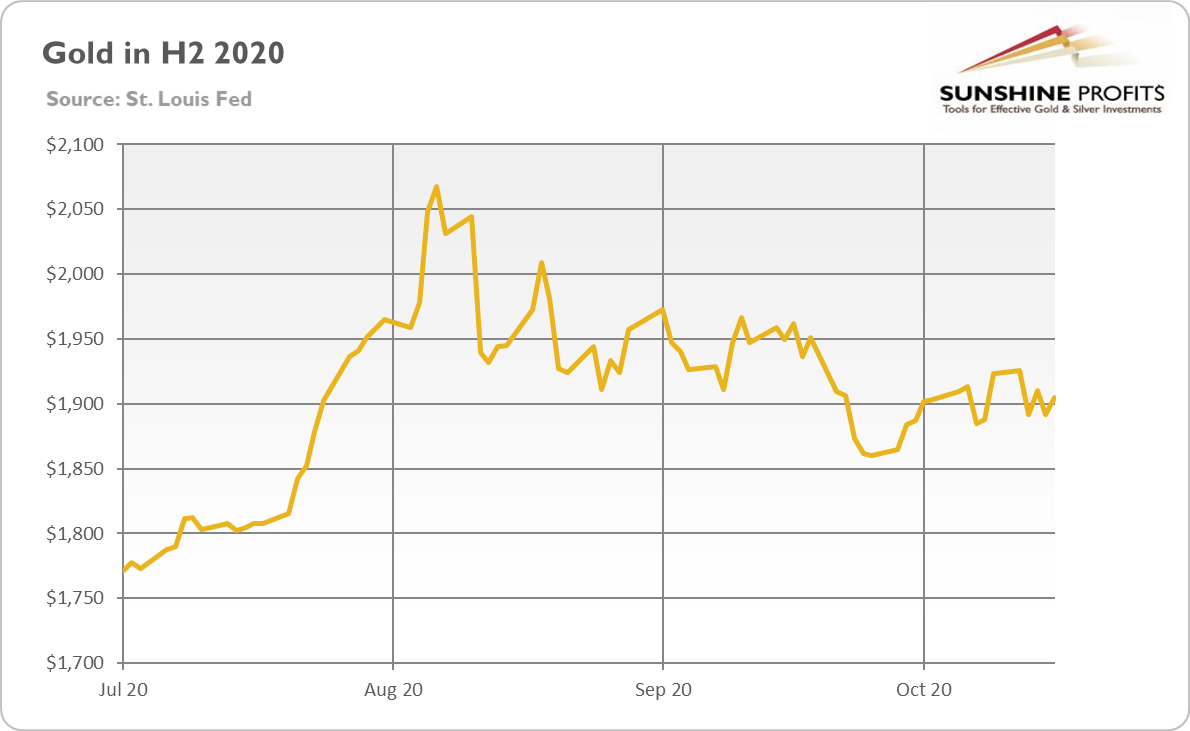 What is most important here is that the price of gold managed to rise above $1,900 again, despite the declining odds of a new fiscal stimulus before the elections and the resulting S&P 500 Index decrease. Gold’s decoupling from the stock market would increase its role as a safe-haven asset.

However, it might be the case that gold is just hovering around $1,900 right now, and it needs a fresh catalyst to continue its rally . Who knows, maybe the US presidential elections, which are likely to be contested, will provide such a trigger? We will elaborate on this later – stay tuned!

Related: Gold Asks Where Is The Inflation