Has Gold “Ever Given” to You?

Neither the Suez Canal blockade nor the SLR exemption’s expiration should significantly affect gold, whose price is likely to be soon shaped by other factors.

Do you think you’ve had a bad day? If yes, then imagine the helmsman of the Ever Given who somehow managed to get his giant container ship stuck in the Suez Canal, disrupting global trade and causing economic damage worth millions of dollars each hour. Sure, the blockade won’t sink the global economy (pun intended), but it won’t help it either. After all, the Suez Canal is the gateway between Europe and Asia, through which around 12-13% of world trade flows, as does 30% of the world's daily shipping container freight. So, every day of obstruction disrupted the movement of goods worth about $9 billion, having a significant impact on global trade.

Of course, the world won’t end, and ships can always choose an alternative route around the Cape of Good Hope at the southern tip of Africa, but this route takes several days longer. So, the blockade has significantly delayed the consignments of goods and fuel, and exacerbated the already pandemic-disturbed supply channels. As a reminder, there are shortages of containers, semi-conductors, and other inputs and finished goods, that have significantly lengthened delivery times and pushed prices up. Although the blockade of the Suez Canal was temporary, it added additional disruption on top of existing supply problems. Meanwhile, the central banks and governments interpret everything as demand problems that need to be addressed through easy monetary policy and loose fiscal policy .

The accident of the Ever Given won’t significantly impact gold prices. And, as the chart below shows, we haven’t seen any substantial effects so far. 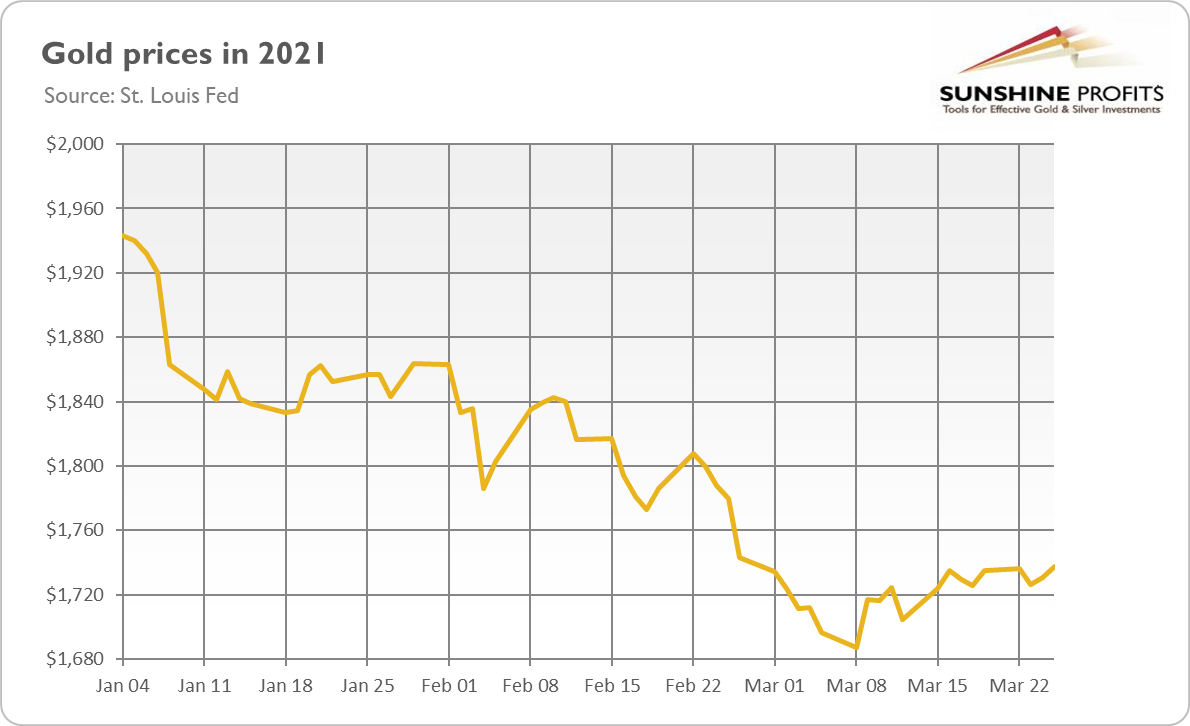 However, the blockade could remind investors (if they somehow managed to forget amid the pandemic ) that black swans exist and fly low, and it’s reasonable to have a portion of one’s investment portfolio in safe havens such as gold (for instance, the insurance part of the portfolio ). Additionally, the upward pressure on prices (although limited) could strengthen the appeal of gold as an inflation hedge , especially considering that officially reported inflation is likely to jump next month because of the low base effect and all the recent supply disruptions.

Fed Allows for Expiration of SLR

And now for something completely different. The Federal Reserve Board announced that the temporary change to its supplementary leverage ratio , or SLR, for bank holding companies will expire as scheduled on March 31. What does this mean for the U.S. economy and the gold market?

The SLR is a regulation that requires the largest U.S. banks to hold a minimum level of capital. The ratio says how much equity capital the banks have to hold relative to their total leverage exposure (3% in the case of large banks and 5% in the case of top-tier banks). To ease strains in the Treasury market during the Covid-19 epidemic , the Fed temporarily excluded the U.S. Treasuries and central bank reserves from the calculation. In other words, banks could increase their holdings of government bonds and central bank reserves without raising equity capital.

But now, with the exemption expired, their equity capital will be calculated again relative to the banks’ total leverage exposure, including Treasuries and central bank reserves. So, it might be the case that the banks will have to either increase the amount of equity (which is rather unlikely) or reduce the amount of government bonds. And if they sell Treasuries, it would add to the upward pressure on the bond yields . This would prove rather negative for gold, which is a non-interest-bearing asset.

However, it doesn’t have to be the case. I mean here that the U.S. eight large and systematically important banks wouldn’t fall below their 5% regulatory minimum. Actually, they are said to have a roughly 25% buffer above minimum thresholds, so the expiry of the SLR exemptions doesn’t have to significantly affect the functioning of the Treasury market, at least not immediately. Hence, the impact of the expiration of the SLR exemption could have limited effect on the gold market , if any.

It seems that the price of the yellow metal will be rather shaped by the real interest rates , the U.S. dollar, inflation, the level of confidence in the U.S. economy, etc. In the short-term, the focus on economic recovery could continue the downward pressure on gold prices, but in the long-term, the stagflation theme could resurface and push the price of the yellow metal up.