Tumbling investment demand for gold was offset by improving consumer demand during first quarter 2021. According to the World Gold Council, 1Q gold demand stood at 815.7 tons, which was essentially flat against 4Q 2020, but down 23% year over year.

World Gold Council added that the average gold price during the 1Q rose 13% year over year but declined 4% sequentially. Consumer demand increased as customers welcomed the opportunity to buy gold at lower prices vs. the highs seen last year, especially as many areas lifted lockdowns. Additionally, the economic recovery optimism drove sentiment up. 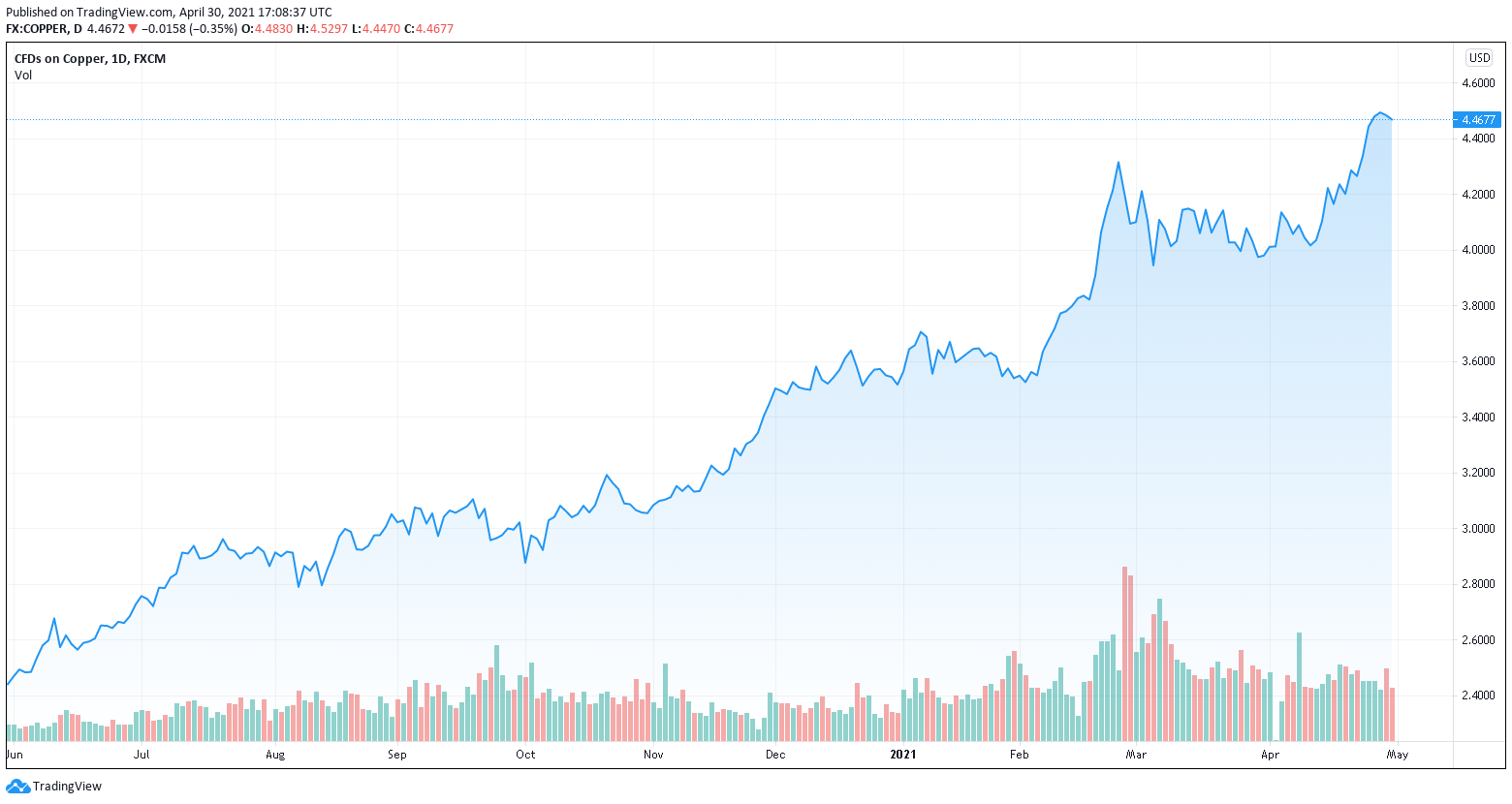 Jewelry demand rose 52% year over year to 477.4 tons, and the value of jewelry spending at $27.5 billion was the highest first-quarter total since 2013. Bar and coin investment stood at 339.5 tons, a 36% year-over-year increase as investors readying for inflation, took advantage of bargains. This was the third straight quarter of growth, marking the greatest volume since 4Q of 2016.

The Council explained that sizable outflows from gold-backed exchange-traded funds were offset by the growth in consumer demand. Outflows amounted to 177.9 tons during the 1Q, driven by higher interest rates and declining sentiment due to the falling gold price .

Central banks were net buyers during 1Q, driving official gold reserves 95.5 tons higher, which is a 20% sequential increase but a 23% decline year over year. Gold used in technology was up 11% year over year, driven by recovering consumer confidence. Technology demand stood at 81.2 tons, a bit higher than the five-year quarterly average of 80.9 tons.

Gold Faces Off with Interest Rates

The Council added that although gold demand has rebounded, especially in the jewelry and bar and coin markets, the sharp increase in interest rates in global fixed income markets has driven the recent selloff in the yellow metal. Improving economic conditions and rising inflation expectations have driven rate increases.

It makes sense that interest rates hurt the gold price in the short term because the opportunity cost of holding gold increases when investors are drawn instead to high coupons or large dividends. However, interest rates remain historically low despite the sharp increase recently, especially real rates, which are mostly negative across developed markets.

The World Gold Council said real rates in the U.S. would have to move above 2.5% for gold to see a meaningful long-term impact. Although rising rates do serve as a headwind to gold, the yellow metal can still offer positive real returns when interest rates are rising.

In that situation, risk assets would sell off due to a higher opportunity cost, and the gold price would rise, especially several months into the inflation cycle. Over the last 30 years, gold has outperformed other sectors and commodities by the second and third years of reflation periods.

Aside from interest rates, there could be one more thing holding back the gold price right now, and that's Bitcoin. Bloomberg Intelligence argues that the gold price would be at $2,300 an ounce if it weren't for the leading crypto. Senior Commodity Strategist Mike McGlone said the digitalization of money has given the U.S. dollar and Bitcoin a boost, and taken some of the luster away from gold.

He sees the metals sector as having the "greatest potential to continue outperforming most commodities," especially in the long term. McGlone explained that as money goes digital, it enhances the reserve currency value of the dollar while replacing gold with Bitcoin. 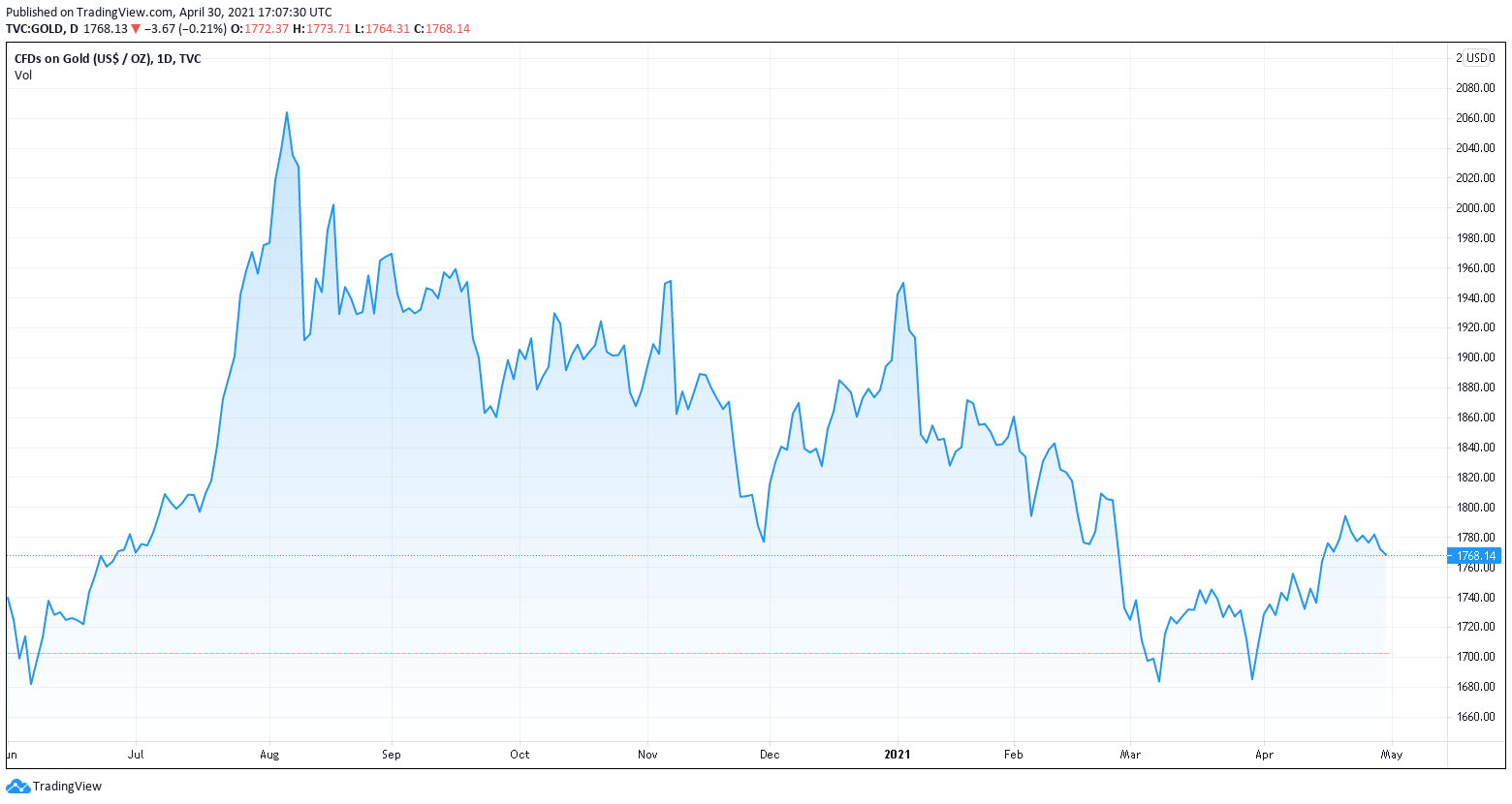 Based on the copper price at almost $9,800 a ton with constant yields, he estimates that the gold price would be closer to $2,300 instead of $1,780 an ounce, matching the 10-year relationship between the copper/ gold ratio and bonds. McGlone noted that innovation had given copper and other metals a boost as devices contain such metals, but it has actually hurt gold, which is being replaced by Bitcoin.

To address the substitution issue, he suggests putting the two assets together in your portfolio. The strategist looked at the gold-Bitcoin 75/25 index and found that it has about the same risk as the stock market and a 110% gain since the beginning of 2018. That's nearly twice that of the S&P 500 and more than three times that of spot gold.

The reports of gold death would turn premature, and I view the institutional and consumer demand as returning, and rising rates as not necessarily biting – especially as inflation takes firmer hold. Bitcoin has siphoned off some demand away from gold, and strong argument can be made in favor of holding both assets within your portfolio.