Bitcoin Has Hit the Big Leagues. Will Apple Bite Next?

Tesla announced in a public filing last week that it bought $1.5 billion worth of Bitcoin as part of a corporate policy that allows the electric vehicle (EV) maker to invest in “alternative reserve assets,” including not just cryptocurrencies but also gold bullion and gold ETFs.

The company added that it intends to start accepting Bitcoin as a form of payment. No word on gold or other precious metals, though.

Tesla’s move into Bitcoin makes a perfect kind of sense. CEO Elon Musk, briefly the world’s wealthiest person before falling back to number two, has long been a fan of the crypto, which, like his company, represents a potential seismic shift in how we conduct our personal finances and power our transportation.

Both Tesla and Bitcoin had a killer 2020. Shares of the carmaker rose 743%, making it the year’s best S&P 500 stock. Bitcoin, meanwhile, increased more than 300%, fueled by institutional investor demand. As I write this Tuesday morning, its price has blasted past $48,000. 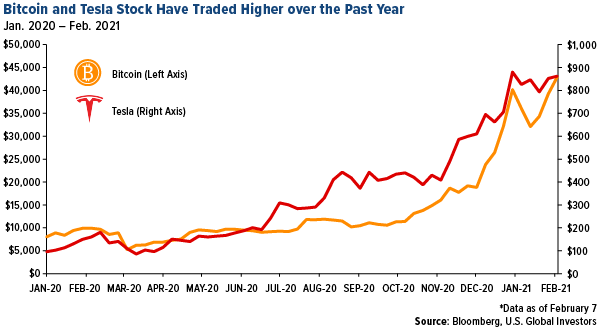 Tesla wasn’t the only major crypto news last Monday. The Chicago Mercantile Exchange (CME) launched its long-awaited futures contracts for Ether, the native digital currency of the Ethereum network. The move comes a little more than three years after it unveiled Bitcoin futures. Today, the second largest coin after Bitcoin soared past $1,800 for the first time ever. 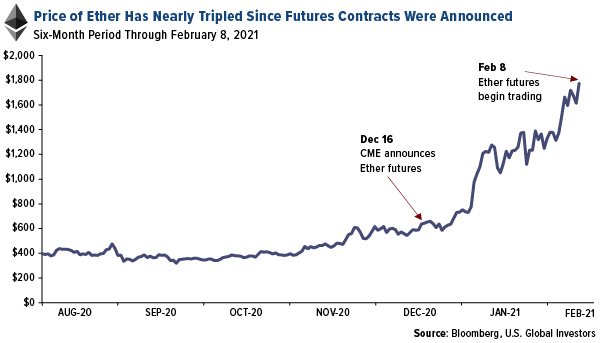 Bitcoin Has Hit the Big Leagues

I believe both headline events—Tesla’s decision to buy Bitcoin and the CME’s decision to offer a new way to trade Ether—help underscore the growing acceptance of digital assets as more than just speculations but currencies and investments as well.

Google searches for “invest in crypto,” in fact, have recently hit a new all-time high. 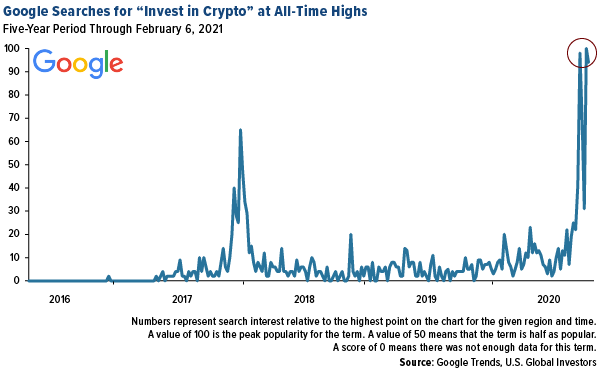 For years now, skeptics have been comparing Bitcoin’s rise to the tulip bulb mania of 17th-century Holland. A couple of years ago, Warren Buffett called the cryptocurrency “rat poison.”

(Miller later one-upped Buffett again, after the Oracle of Omaha dumped airline stocks near the start of the pandemic. The former chief investment officer at Legg Mason said in May that if you don’t own airlines, “you’re making a bet against the vaccine.” Six months following Miller’s comment, Pfizer and Moderna both announced they had developed effective vaccines against the virus.)

Putting his money where his mouth is, Miller this week authorized his flagship fund to begin participating in the world’s largest cryptocurrency. The $2.7 billion Miller Opportunity Trust now has the right to invest in the Grayscale Bitcoin Trust.

So who will be the next big firm or investor to announce their foray into crypto? I’ve been seeing some chatter in recent days that Apple could be chomping at the bit.

One analyst at the Royal Bank of Canada (RBC) made such an argument this week. In a piece published Monday, analyst Mitch Steves said he believes it would be a no-brainer for the iPhone maker to develop its Apple Wallet into a Coinbase-like “Apple Exchange,” giving users a more trustworthy and readily available means to trade cryptos.

Further, Apple should consider buying Bitcoin outright—perhaps as much as $5 billion—which would “send even more users to ‘Apple Exchange,’” Steves writes.

To elaborate, if Apple “purchased $5B of Bitcoin (20-25 days of cash flow), the price of the underlying asset would need to rise by 10% for the firm to fully fund the [hypothetical crypto exchange] in the first place.”

Steves adds: “This is a solid value proposition in our view as the business would be funded without diluting any other projects at the firm (iPhone, potential cars, etc.).”

A 10% increase in Bitcoin would be a non-event. As many of you know, cryptos remain highly volatile. While both the S&P 500 and gold bullion have a 10-day standard deviation of ±3%, Bitcoin has one as great as ±16.

Besides the Grayscale Bitcoin Trust, a favored way to get access to cryptos without owning them outright is through HIVE Blockchain Technologies (TSX.V:HIVE) (OTCQX:HVBTF). HIVE is not only the world’s first publicly traded crypto-mining firm but it’s also the only one currently mining both Bitcoin and Ether.

Because HIVE uses only green, renewable energy to mine its coins, the stock appeals to ESG investors. ESG stands for Environmental, Social and Governance, a set of criteria an increasing number of today’s investors use to screen for potential investments.

I’m very pleased with HIVE’s trading volume. In 2020, HIVE traded more than 1.7 billion shares in Canada alone, making it the year’s most liquid stock on the TSX Venture Exchange and Canadian Alternative Trading Systems (ATS). And in the U.S., HIVE ranked number four for liquidity on the 2021 OTCQX Best 50, a ranking of top performing companies on the OTCQX Best Market based on 2020 total return and average daily dollar volume growth. HIVE soared close to 2,300% during the year.

Related: Believe It or Not, Bitcoin Hype Isn't Out of Control...Yet