Are Luxury Stocks a Better Investment Than Designer Handbags?

In November 2020, an Hermès handbag sold at Christie’s for a cool HK$3.4 million, or US$437,330. It set a new sales record for a handbag of any kind according to the auction house, which described the item as being made from the hide of a rare white Nile crocodile.

Designer handbags have gained acceptance as alternative investments along with other tangible assets, some examples of which include art, fine wines, classic cars and more.

Such assets are often favored by high-net-worth investors (HNWIs) because they serve as portfolio diversifiers and can have high returns. Plus, they’re great to show off.

At the same time, these assets—like conventional investments—can have risks. They’re difficult to value, illiquid and unregulated.

Why not, then, just buy stock in the companies that make the handbag or wine or car?

That was the question I asked myself as I skimmed through Knight Frank’s annual report on wealth and luxury investment. Now in its 15th edition, this is the first Wealth Report that’s come out since we launched the Global Luxury Goods Fund (USLUX), so I took particular interest in what it had to say about the luxury market in 2020.

According to the British consultancy firm, high-end handbags—those manufactured by Hermès, Louis Vuitton and others—were the top performers for the second year in a row, their value increasing by 17% in 2020, based on the Knight Frank Luxury Investment Index (FKLII). Fine wines were a close second, up 13%. Five asset types lost value during the year, including rare whiskeys, down 4%, and art, down 11%.

I was curious to see how these tangibles stacked up against equity in luxury companies. I wasn’t disappointed by the results. The S&P Global Luxury Goods Index, which tracks around 80 companies that are engaged in producing or distributing luxury goods, ended 2020 up 36%, or more than double what handbags returned. 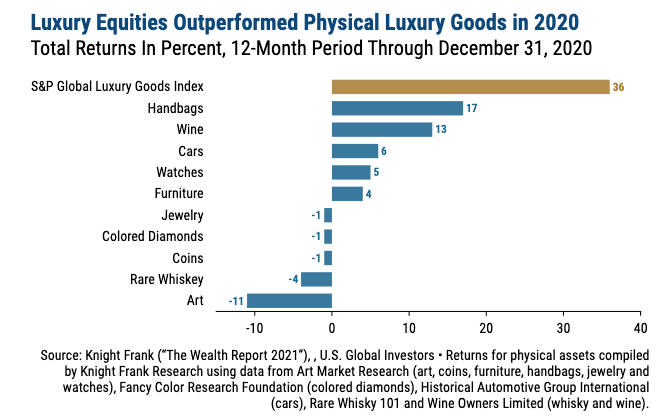 Granted, that’s just for one year, and it’s fair to assume that the pandemic, not to mention the economic pullback that came as a result, dented demand for certain tangible assets. Due to lockdowns, auction houses had to cancel or postpone lives sales. Art galleries around the world reported an average 36% drop in sales in the first half of 2020 compared to the same period in 2019, according to analysis by Art Basel.

But even when we extend the comparison out 10 years, we see that luxury stocks remained highly competitive. The index of luxury goods increased 227% for the period ended December 31, 2020, more than any other tangible tracked by Knight Frank except rare whiskeys, up 478%. 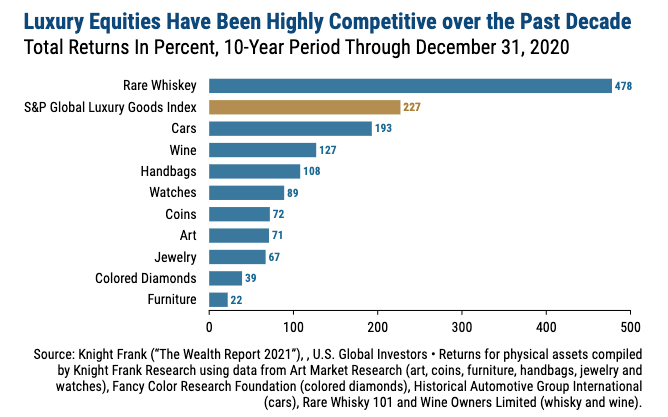 I don’t know about you, but this makes me wonder if luxury stocks aren’t a more thoughtful gift for a loved one than a new watch or jewelry.

The actor Michael B. Jordan must have had the same idea. It was reported that, during a Valentine’s Day dinner last month, the Black Panther and Creed star gave his girlfriend Lori Harvey shares in Hermès International.

The investment was well made. Since Valentine’s Day, Hermès is up more than 3% as of March 11.

Betting on an Increase in HNWIs and UHNWIs

As I’ve said before, one of our goals for launching the Global Luxury Goods Fund (USLUX) was to seek to track the spending habits of HNWIs and UHNWIs, whose incomes have historically grown at a much faster rate than earners in lower brackets.

When we announced we would be coming out with a luxury mutual fund on July 1, 2020, many market watchers questioned the timing. The pandemic has been hard on the pocketbooks of people from a wide range of earners.

That hasn’t necessarily been the case for ultra-high-net-worth individuals (UHNWIs), or those with incomes over $30 million. This cohort rose 2% between 2019 and 2020, according to Knight Frank. Asia, and particularly China, ranked number one at 12% for the continent, 16% for the country.

The U.S., by comparison, added ultra-wealthy individuals to its population at a rate of 3%.

I’m thrilled by how well USLUX has done since its inception, despite the challenges. The fund increased more than 36% through March 9, 2021, beating its benchmark, the S&P Composite 1500. 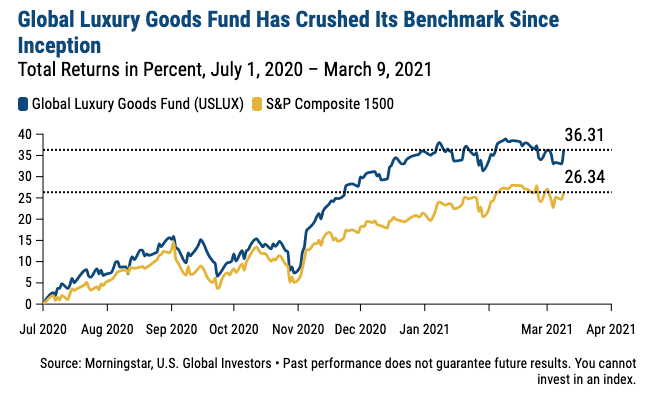 We continue to be bullish on the luxury market, especially now as the end to the pandemic is starting to come into focus. The $1.9 trillion rescue package, recently signed by President Joe Biden, may also be constructive for retail sales in general and luxury sales in particular.

Before splurging on that Hermès handbag, though, I invite you to consider USLUX.