AMZN vs. MSFT: Which Cloud Computing Stock Is a Better Buy?

The cloud computing market has exploded in the last decade and has grown at a massive pace. It remains one of the fastest-growing tech verticals as Gartner forecasts the public cloud market to increase by 18% from $257.5 billion in 2020 to $305 billion in 2021. Its forecast to surpass $362 billion by end of 2022, making public cloud giants such as Amazon (NASDAQ: AMZN) and Microsoft (NASDAQ: MSFT) top bets right now.

In the first quarter of 2021, Amazon Web Services (AWS) which is the tech giant’s public cloud business reported sales of $13.5 billion. It was higher than consensus estimates of $13.1 billion and was up 32% higher year over year. AWS’s top-line accelerated in Q1, compared to its 28% growth in Q4 of 2020.

At the end of the March quarter, AWS accounted for 12% of total Amazon sales. However, over 47% of operating profits were generated from this business and it remains a key driver of the bottom line.

Microsoft does not disclose its cloud revenue and just reports the growth rate for this vertical. According to MSFT, Azure sales were up 50% year over year in the March quarter, higher than the 46% growth forecast by Wall Street. In the prior-year period, Azure sales stood higher at 59%.

The COVID-19 pandemic has acted as a tailwind for several tech companies. Enterprises have decided they no longer want to manage their own tech infrastructure, and partnering with public cloud companies such as AMZN and MSFT allows clients to lower costs and improve capabilities.

MSFT CEO Satya Nadella said, “Over a year into the pandemic, digital adoption curves aren’t slowing down. They’re accelerating, and it’s just the beginning. We are building the cloud for the next decade, expanding our addressable market and innovating across every layer of the tech stack to help our customers be resilient and transform.”

What next for Amazon and Microsoft investors? 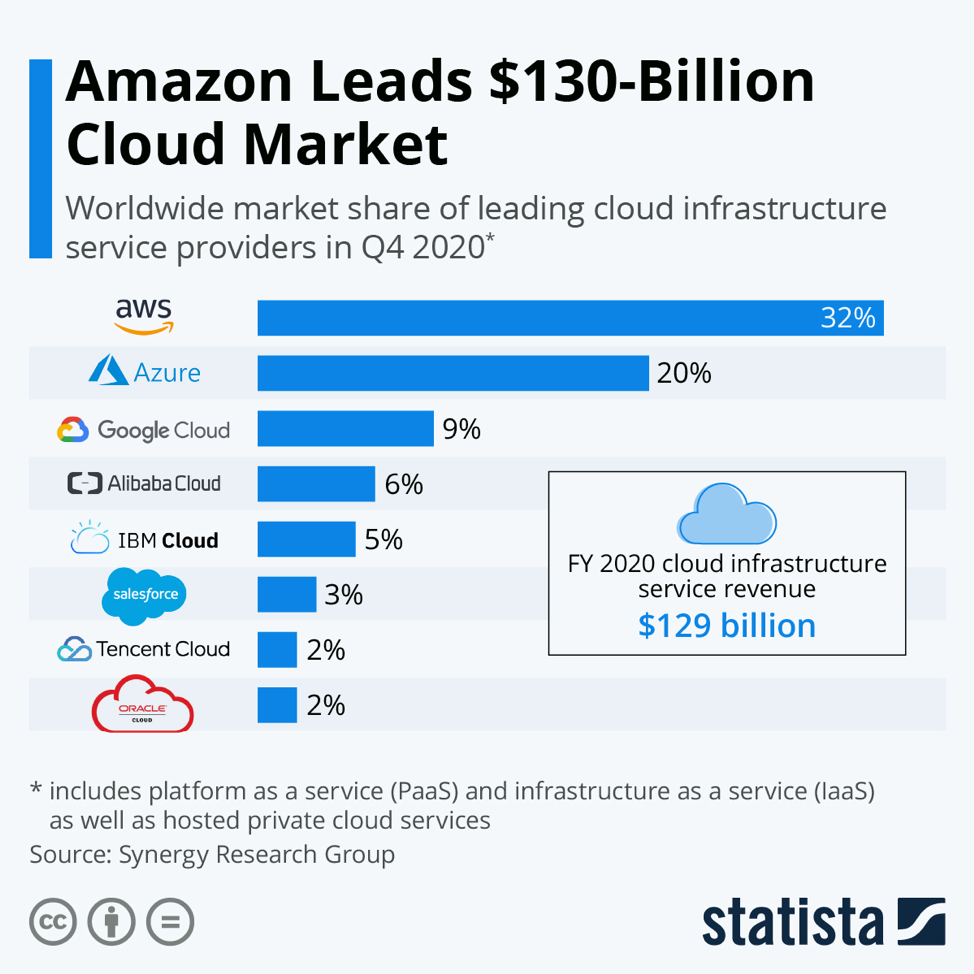 According to Statista, AWS and Microsoft Azure led the cloud infrastructure market with a share of 32% and 20% respectively, at the end of Q4 of CY 2020. Other major players in this space include Alphabet’s Google (NASDAQ: GOOG)(NASDAQ: GOOGL), Alibaba (NYSE: BABA), IBM (NYSE: IBM), Salesforce (NYSE: CRM), and Tencent (OTC: TCEHY) that account for 9%, 6%, 5%, 3%, and 2% respectively of this market.

However, we have also seen that AMZN and MSFT derive just a portion of their sales from this business. In fact, Amazon enjoys a leadership position in multiple businesses that include e-commerce, online streaming, digital advertising, and eSports streaming.

Likewise, Microsoft’s suite of enterprise-facing software products is used by companies all over the world allowing them to generate a steady stream of recurring income.

It means AMZN stock is trading at a forward price to sales multiple of 3.3x and a price to earnings multiple of 57x. Analysts expect the stock to touch $4,240 in the next 12-months which is 33% above its current trading price.

It means MSFT stock is trading at a forward price to sales multiple of 11.44x and a price to earnings multiple of 33x. Analysts expect the stock to touch $293 in the next 12-months which is 16% above its current trading price.

While Amazon is trading at a lower price to sales multiple, its PE ratio is much higher than Microsoft. It suggests Amazon continues to sacrifice profit margins for top-line growth. AMZN is also growing at a faster pace compared to MSFT and has massive upside potential compared to Wall Street estimates.

Related: Why SNDL Stock Is Up 85% in the Last Few Trading Sessions?